From Outer Space to Under the Sea, Hydraulics Put the Fun in the Entertainment Industry

Remember the scene in the 1976 remake of King Kong when the ape’s giant hand holds up actress Jessica Lange? The producer didn’t have the luxury of time to get that mechanical hand designed. In fact, the producer was relieved when the special effects guy from MGM said, “We can do it in four months. But you’ll have to let me do it my way—with hydraulics.”

The use of hydraulic muscle isn’t new to the entertainment industry. Although the majority of hydraulic components are used in industrial applications, it’s interesting to see how well-designed systems, similar to industrial applications, can be used to create special effects and motion for theme parks, museums, and multi-media theater attractions. 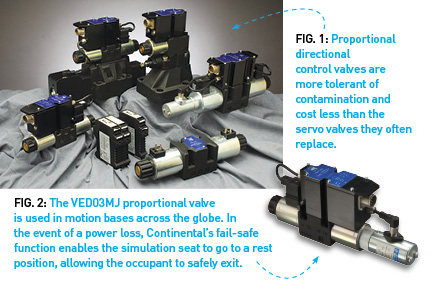 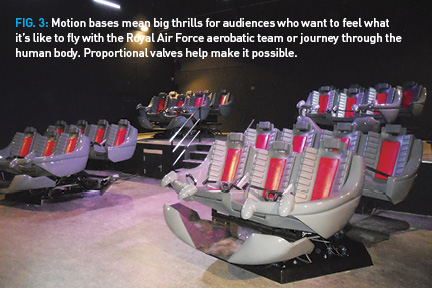 “Applying the lessons learned in our many industrial applications and listening to the special needs of the entertainment industry has led to growth in our business in this area,” said Dale Horihan, CEO of Continental Hydraulics based in Minneapolis, Minn.

Netjes’ customer, I & M Engineering, is the design and manufacture team that produces the StarGazer, a simulation attraction found at several venues across the world. The StarGazer is a seven-seat, six-degree-of-freedom (6DOF), 4D motion platform. When the StarGazer is placed in front of a high-definition film projection system, seat movements are programmed to allow the customer to essentially ride the movie.

“This illusion requires quick response time coupled with precision, all to convince our inner ear that the motion is as exciting as we expect and that we are having fun, or too much fun,” said Netjes.

When the movie suggests a movement—a pitch, roll, or yaw, for example—the motion base moves the audiences’ seats. For action-type films, this requires fast response times, smooth control of the power, precision, and quiet operations.

“For those reasons,” said Chris Graham, Continental’s regional manager and technical support, “hydraulics is the system of choice for 6DOF applications.” Although many companies are using traditional servo valves in their system designs, Graham says they’re not as forgiving. They require a higher technical level and increased life cycle costs. Modern proportional valves with integrated digital electronics have near-servo valve performance without the servo problems.

The challenge was when Netjes’ consulted with I & M Engineering on transitioning from servo to proportional valves. He knew the proportional valves would work just as well—if not better—than the servo valves and offer three key advantages:

The new solution proved out. Each motion base seven-seat unit now produced by I & M Engineering uses six of Continental’s proportional valves. “My customer gained precision without the expense,” Netjes said. “Proportional valves can do everything servo valves can do in this application with more power, longer life, less headache, and other added features that deliver successful installations.”

Hydraulic systems have always played a major role in the entertainment industry. “With the development of flexible electronic controls, these powerful systems have attained a level of utility and flexibility that permits their use in a wide range of demanding and creative applications,” Horihan said. 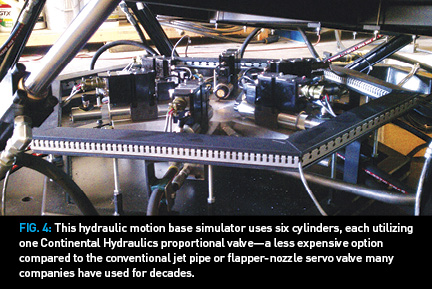 Six Design Advantages for Hydraulic Installations in the Entertainment Industry

There are different classes of entertainment-industry applications. Thirty years ago, the only option was a servo valve. Today, there are many classes of performance to match each application exactly—from simple animatronics to simulators. Each graduation requires more technical involvement and total cost.

For more information: From outer space to under the sea, Continental Hydraulics’ pumps, power units, valves, and proportional products are used in some of the harshest conditions. In operation since 1962, Continental Hydraulics serves the entertainment, brick and block, food processing, oil and gas, and automotive industries. Visit www.continentalhydraulics.com or contact Chris Bentley at 952-895-6400 or sales@conthyd.com.

One thought on “From Outer Space to Under the Sea, Hydraulics Put the Fun in the Entertainment Industry”