The Reinvention of the Shear Type Coupling 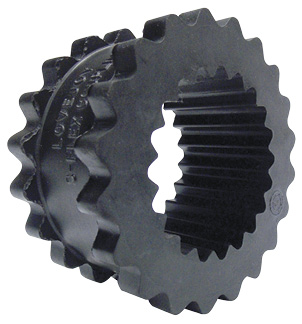 Shear type or sleeve type couplings originated in the 1950s. It is a very popular choice for pump applications where it gained early acceptance and has grown organically across many industries including wastewater, paper/pulp, marine and steel to name a few.

The shear type coupling is a very simple design and is comprised of 2 flanges and 1 sleeve. The torque is transmitted through the twisting of the elastomeric sleeve and virtually eliminates the load on bearings and shafts and is excellent with vibration dampening. As with other elastomeric couplings, it is a low maintenance and non-lubricated coupling option.

Lovejoy, Inc. set a goal to redesign the sleeve coupling product and to make it the highest quality and longest lasting offering available at the same competitive price. The result is the S-Flex Endurance™, a new and improved, longer lasting EPDM rubber sleeve material.

Testing was performed to determine the actual physical performance and torsional capabilities of the new EPDM sleeves. The test articles were installed between the torque actuator’s driving S-Flex flange and a driven torque transducer flange. The testing regiment consisted of accelerated fatigue testing where the sleeves were subjected to high frequency start-stop-reverse cyclic loading. The sleeves completed extensive testing at loads greater than the sleeve’s torsional ratings. The sleeve’s performance characteristics were collected for comparison to the original material and the competitor’s product. The static torsional stiffness was repeatedly measured as the slope of a stress-strain curve during dynamic cycling testing. The dynamic torsional stiffness was also continuously evaluated over the full test duration. As an additional performance guide, the competition’s equivalent sleeve materials were evaluated as well. 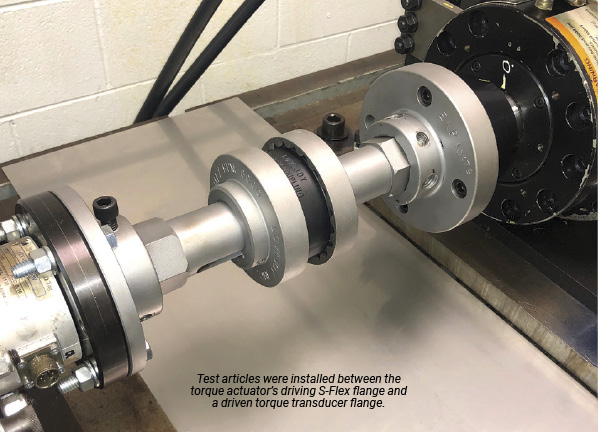 S-Flex Endurance sleeve’s static and dynamic torsional stiffness tested at least 30% greater than the former Lovejoy material and outperformed the current products in the market. The S-Flex product operated with more resilience and consequently less heat build-up. Furthermore, post-test inspections showed the new sleeves are very durable under these extreme test conditions, as they maintained their tooth shape and displayed minimal wear.

Test Duration Graph shows that the former EPDM sleeves lasted an average of 747k cycles before reaching torque overload failure where the sleeves failed and could no longer transmit the set torque. The new EPDM material was tested for a week up to about 4.75 million cycles and no signs of failure were present at which point testing was ended. Accelerated fatigue testing is performed at severe high-torque and high-frequency conditions. Typical operation cycle life will greatly exceed the test cycles in the graph. The cyclic fatigue test conditions demonstrate the new EPDM material has at least a 3X longer life expectancy, if not more, than the former material. 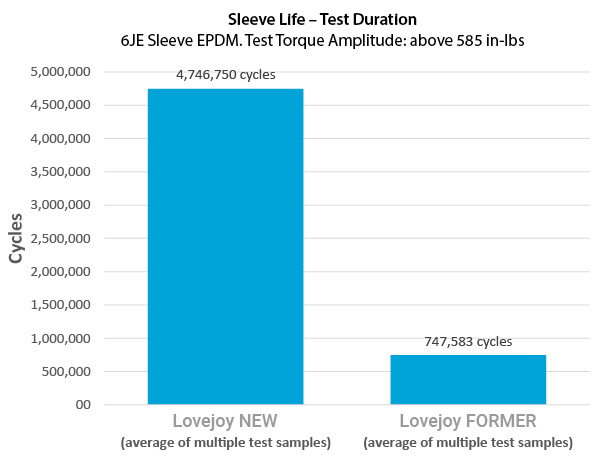 Durability – The new and improved material is estimated to last at least three times longer than before. A longer service life is provided even at the higher torque ratings. A noticeable abrasion resistance improvement gives the ability to withstand mechanical wear during coupling use.

Resilience – The rebound characteristics are significantly improved. The new sleeve material absorbs less frictional heat than the current products in the market. This heat build-up advantage leads to less wear and minimizes the possibility of coupling failure.

Strength – The higher torsional stiffness corresponds with the elastomer’s overall toughness (tensile strength and tear strength) increase. This allows many applications to use a smaller, less expensive coupling and still achieve the same torque rating. The material’s resilience also contributes to the performance upgrade by enhancing the element’s resistance to deformation.

Heat Resistance – The sleeve’s temperature rises during operation due to the hysteretic behavior of rubber. The new sleeves exhibited fast heat dissipation and maintained a lower temperature, which leads to a longer service life.

Recovery – Resistance to permanent deformation as well as its elastic recovery has improved.

The Static Torsional Stiffness Graph demonstrates the higher torsional stiffness of the new EPDM material. Torsional stiffness represents the torque that the sleeve and coupling are able to transmit as well as the strength of the material itself. The graph shows a torque-angle diagram in the form of a hysteresis loop with the loading and unloading curves of a test cycle. The torsional stiffness is defined by the slope of the load curve as shown on the graph. The test coupling rotates – twists the sleeve to achieve a torque slightly above the 6JE torque rating. The Lovejoy angular deflection is only 12° in comparison to over 13° for similar products so the Lovejoy sleeve undergoes lower deflection to provide the same torque level. 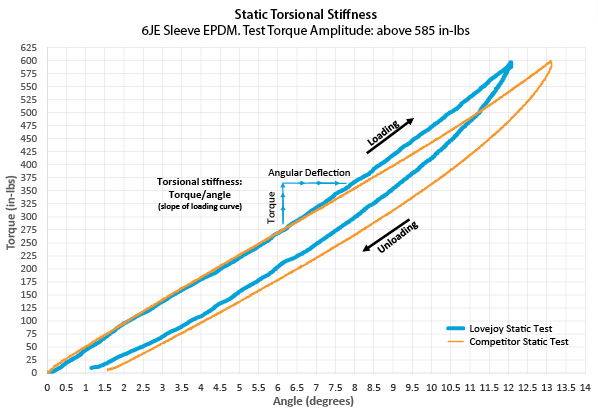 The Dynamic Torsional Stiffness graph demonstrates the higher torsional stiffness of the new EPDM material in comparison to similar products at equivalent start-stop-reverse dynamic cyclic testing. Torsional stiffness represents the torque that the sleeve and coupling are able to transmit as well as the strength of the material itself. 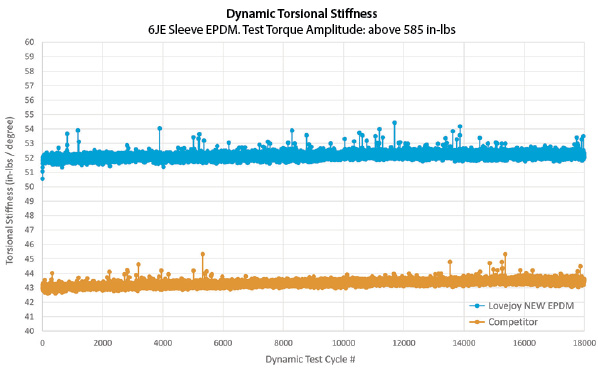 The new and improved S-Flex Endurance coupling will continue to work well on electric motor driven applications with uniform loads such as centrifugal pumps, blowers and fans, screw compressors, some conveyors, line shafts, and vacuum pumps.