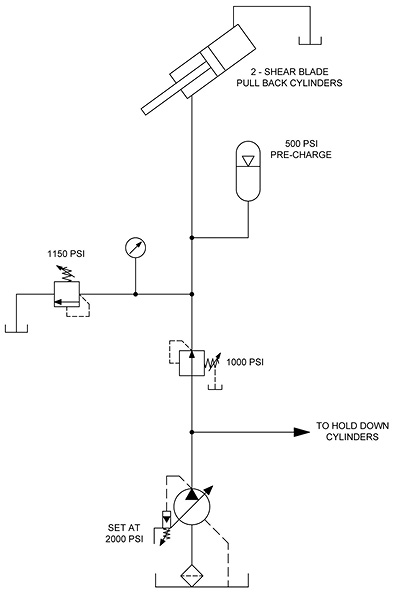 The piston pump that provides flow to two hold back cylinders keeps failing after a couple months of operation. The first failure of the pump after years of operation was due to one of the nine piston shoes failing and causing the pump to grenade internally. An orifice hole that routes a small flow of oil to the back side of the piston shoes for lubrication when the piston is under pressure was plugged by a piece of rubber, causing the failure.

The customer cleaned the system, installed new oil, and added additional filtration. Unfortunately, they continued to have failures where a piston shoe broke free of the piston and again caused a major failure of the pump. However, this time they could not find a plugged piston orifice. They repeated the cleaning process and installed a new pump, but it failed after a couple months of operation.

Any idea what the problem could be?

When a shoe on a piston is pulled or worn off, it normally is an indication that there is a high intake vacuum or high case drain pressure. Since the pump grenaded again and the intake vacuum was fine, it had to be due to high-case pressure. The team was told to remove and inspect the case drain line where they found pieces of the old failed pump piston shoes partially blocking an elbow fitting, causing high-case pressure that pulls the shoes off the main pistons.