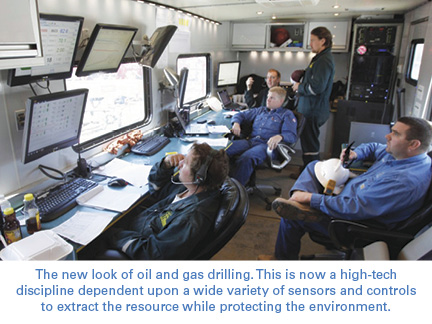 With the growth in unconventional drilling, the need for liquid level sensors grows.

Fluid sensing in oil and gas is more important than ever. Water, oils, and chemical fluids are integral throughout the life cycle of a well, and even more so with the increased activity in unconventional drilling techniques, such as hydraulic fracturing. New techniques and regulations have added the need to monitor a wide variety of chemicals along with processing flow back and produced wastewater. Liquid level sensing now goes beyond the issues of equipment performance and reliability. Today’s producers must contend with the byproducts of their operations to provide better protection against environmental contamination through better collection, storage, and treatment. Each of these steps is handled more efficiently, and with better assurance, when liquid level sensing is applied.

Although hydraulic fracturing is today exempt from the Clean Water Act, various environmental groups are pressing drilling companies to act in good faith and self-govern their practices of controlling water use and contaminants.

A long list of toxins is associated with found water resulting from environmental drilling. Depending on the location, size, and duration of the drilling site, treatment of produced water may happen at the site or may be transported to other treatment facilities. Regardless, this contaminated water is typically stored onsite in some fashion until it is treated. Some of the most common chemicals in found water include

Successful plans deal with the continuous collection, treatment, and disposal of these and other toxins as part of the overall oil and gas production routine. Use of reliable liquid level sensing has become a major component of executing these plans.

Failures have been costly. Following an EPA action, Exxon recently agreed to pay a $100K penalty and spend an estimated $20M to prevent spills of wastewater from gas-drilling operations in Pennsylvania and West Virginia. At issue was a spill in 2010 where state inspectors came across a leak stemming from an open valve at a frack water recycling plant. Inspectors noted that the open valve was connected to a series of tanks that held wastewater from fracking wells throughout the state. Sensing unexpected drops in fluid level within these tanks could have prevented what was determined to be a release of chlorides, strontium, and barium into a nearby river supplying local drinking water. As part of the agreement, the company must install a continuous, remote monitoring system for all of its permanent production located throughout Pennsylvania and West Virginia with alarms that will be triggered to alert operators immediately in the event of any future spills, and implement a program to actively monitor interconnected wastewater storage tanks.

Similarly, and also in Pennsylvania, unnoticed malfunctions released toxic collected fluids from fracking operations. In one case, 9,000 gallons spilled onto an adjacent farm; in another, the spill was 227,000 gallons that caused the evacuation of many homes.

Today, best practices in oil and gas exploration and production provide better assurances to the public about the safety of drinking water and general environmental protection. The Environmental Protection Agency has suggested a solution to continuously monitor the level of wastewater in order to prevent spills of wastewater generated from natural gas exploration. Reliable, accurate level sensors are key to their solution.

When drilling, operators need to lubricate the drill bit to avoid excessive temperature by injecting a mixture of compounds called “mud” down into the borehole.

There are several tanks that may be used in the process of producing and storing mud, each of which should be monitored for the content level to prevent any cessation of mud delivery to the drill. Examples of mud tanks include the following:

A variety of point level switches and continuous level transmitters have been used for decades by a variety of tank manufacturers to detect an adequate level of mud and its constituents before, during, and after its primary use in the borehole. These sensors typically interface with controllers that automate processes and trigger critical alarms. The accuracy and dependability of the sensor gives the assurance of uptime while drilling. 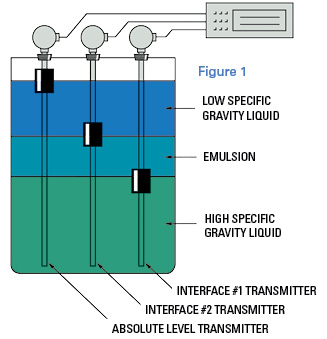 Effluent Tanks: Offshore platforms must protect the oceans from contaminating materials that collect on the platform. Rain drainage carries these contaminants off the platform, where they are captured in effluent tanks. This wastewater is then transferred to special containers and disposed of. Reliable level sensing is a key element in the prevention of effluent tank overflow and environmental contamination that can lead to costly fines and cleanup.

Oil Separators: Oil directly from the borehole is mixed with sand, various gases, and water. Water and oil also form an emulsion. Knowing the boundaries of the oil, water, and emulsion is critical to the separation process. A series of level transmitters can define these boundaries. The illustration in Fig. 1 shows buoyancy-type level transmitters fitted with floats targeted to three specific gravities that identify the water, oil, and emulsions boundary layers.

Hydraulic Oil Tanks: The heavy tools, lifting platforms, and cranes used on drilling sites rely on remote hydraulic power generated connected by a closed system of hoses and joints. Each independent system has a tank for the hydraulic fluid. Over time, however, hydraulic fluid inevitably leaks. Level sensors in the oil supply tanks provide continuous monitoring and ensure operational integrity and safety.

For more information: For over 50 years, Gems Sensors has customized solutions for the dynamic needs of oil and gas customers. The company manufactures a wide array of sensors to detect pressure, level, and flow in a variety of oil and gas applications. Contact by phone: 800-378-1600; email: info@gemssensors.com; web: www.gemssensors.com.

One thought on “Fluid Level Sensors in Oil and Gas”