Analysis of a Hydraulic Oil Failure

I recently conducted failure analysis and a reliability audit on a 300-kilowatt (400-hp) hydrostatic transmission. This hydraulic system was running a synthetic-ester, biodegradable hydraulic fluid, and the original set of pumps failed inside a year.

The system was built and installed by a reputable firm. From a hydraulic-engineering perspective, the circuit was adequately designed and the system well built. But from a maintenance and reliability perspective, there was plenty of room for improvement.

When I arrived on site, one of the first things I noticed was the hydraulic oil appeared dark in the sight glass, whereas the unused oil was the color of light honey. A subsequent check of the oil-analysis reports indicated viscosity was increasing. Suspecting oxidative failure of the oil, I requested acid number and water content by Karl Fischer. These weren’t included in the original test slate.

In the meantime, I turned my attention to analysis of the failed pumps. It was obvious the oil had been polymerizing for some time before the pumps failed. Internal components were heavily coated with a gum-like sludge (Fig. 1). These deposits can block lubrication passages, reduce heat transfer, and cause valve stiction. 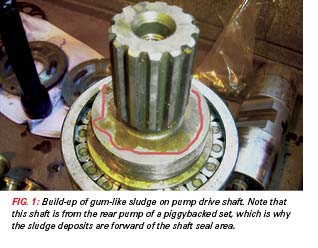 The valve plate and cylinder barrel of both pumps exhibited damage from cavitation erosion—another possible side effect of oxidative failure. The oxidation process typically diminishes foaming resistance and air-release properties of the oil, which in turn causes damage through increased air entrainment and gaseous cavitation.

Acid number came back at 9.5 mg KOH/g and the Karl Fischer at 2,200 ppm. For this particular oil, an acid number of between 4 and 5 mg KOH/g is the trigger for an oil change. And although water contamination was much higher than desirable for this application, hydrolysis was ruled out as a significant factor in the formation of the sludge deposits based on the oil manufacturer’s experience.

Suspecting high-temperature operation as the cause of the accelerated oxidation, I turned my attention to the historical operating parameters of the hydraulic system. As built, the system had a temperature sender installed in the hydraulic reservoir with alarm levels and shutdowns programmed into the system’s PLC. Tests showed this instrumentation to be functioning correctly. But the operators advised the system never had a temperature alarm or shutdown on over temperature.

Because the pump and motor leak internally, which allows fluid to escape from the loop and drain back to the reservoir, a fixed-displacement pump called a “charge pump” is used to ensure that the loop remains full of fluid during normal operation.

Apart from losses through internal leakage, which are made up by the charge pump, the same fluid circulates continuously between transmission pump and motor. This means if the transmission is heavily loaded, the fluid circulating in this loop can overheat. To ensure the fluid in the transmission loop is positively exchanged with that in the reservoir and subsequently cooled, a flushing or hot-oil purge valve is installed in the circuit. 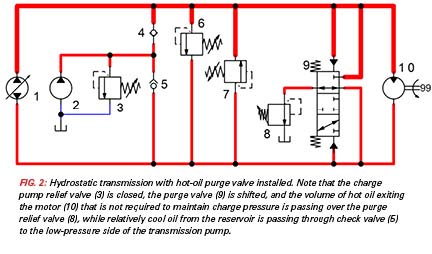 The effect of this is that cool, conditioned fluid drawn from the reservoir by the charge pump charges the low-pressure side of the loop through a check valve located close to the transmission pump inlet. The volume of hot fluid leaving the motor outlet that is not required to maintain charge pressure in the low-pressure side of the loop vents across the flushing valve purge relief and back to the reservoir.

The important point here and what’s relevant to this case is if the flushing valve malfunctions or is not configured correctly, there is no positive exchange of the fluid in the loop with that in the reservoir. This means the transmission loop can be operating in over-temperature conditions, while the fluid in the reservoir remains relatively cool.

As you can see, in a hydrostatic transmission, the correct location for the temperature sender on which over-temperature alarms and/or shutdowns are based, is in the transmission loop—not the reservoir.

A Failure of Maintenance or Design?

One thought on “Analysis of a Hydraulic Oil Failure”