Stay Ahead of the Competition with Effective Fluid Power Proposals

If you only submit cost quotes, you are competing on price alone. Most companies do not want to do that. A proposal is a sales document that tells the reader why you should be selected from the proposals or quotes received. One fluid power distributor improved its win-to-quote ratio from an estimated 10% to 71% when proposals were tried in place of cost quotes. This is a seven-to-one improvement. As a result of similar findings, many companies are now advertising for joint sales managers/proposal managers. 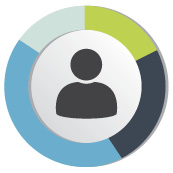 Reading studies indicate that 75% of what we know is obtained visually. We forget 75% of what we hear within 24 hours. The message for proposals is that we should tell our story graphically to the degree possible. Prolific use of graphics will require fewer words in the proposal. Graphics include photos, drawings, line graphs, bar graphs, and pie charts. Before starting to write the proposal, consider these two questions:

Some proposal experts suggest that the ratio of graphics to text should be 50/50 (50% graphics to 50% text). Many sales managers think their company makes superior products and will claim they are the best at what they do, with no substantiation. It is human nature to doubt any claim made without substantiation.

Graphics have two parts: (1) the picture and (2) an action caption. The action caption has a title and tells the reader what he or she is supposed to learn from the graphic. It tells the reader why the graphic was included. The action caption is often more difficult to create than identifying the graphic. Studies have indicated that color graphics are more influential than black and white graphics, and according to one proposal consultant, any graphic that takes more than 30 seconds to understand is overly complex.

Most proposals will require at least the following graphics:

2. Risk Is An Evaluation Factor. 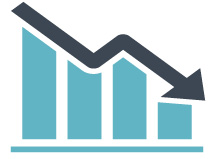 3. Your Planned Program Management Will Be Evaluated.

4. Sell The Buyer As Well As The Technical People.

The buyer may see only a separate cost volume. However, he is a key part of the evaluation team. Convince the buyer that you offer the most value by extracting your benefits from the technical volume and including these in the cost volume. 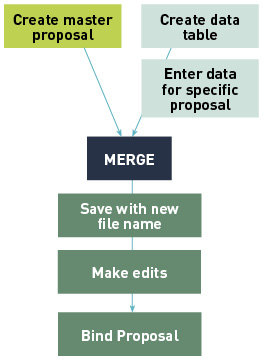 Without some form of automation, it is possible to spend more on the proposal than the profit to be made upon the win. Microsoft’s Mail Merge provides one solution. Mail Merge requires two documents to be created:

With the press of a single button, the two are merged into a proposal ready for editing. Using if-then statements, different text can be printed to match the component being proposed. For example, different text might describe a compressor or a vacuum pump, either of which might be made by the same company. The two documents are used over and over as new proposals are created.

THE ICING ON THE PROPOSAL CAKE

Though outside the realm of graphics, the following have been known to be included in proposals:

Many companies have a proposal form that is used by management in determining whether or not to bid. These forms usually require that there are strong reasons to think you can win the contract. I do not recommend proposing against an incumbent unless it is known that the customer is unhappy with the incumbent. Even then, you are at a disadvantage in that the incumbent has probably performed much analysis under contract that you propose to do after your win. This difference is a risk to the customer in selecting a new supplier. The risk is a possible schedule delay and possible growth in size of the component. I also recommend against making unsolicited proposals.

I have seen proposals with analyses ranging from 12 to 38 pages. The predominant type of analysis included in proposals is a stress analysis for a proposed component. The military services frequently require analysis of various types. They often grade you poorly if the analysis is to be done after award rather than before proposal submission.

Need more evidence that proposals should be part of your marketing efforts? One non-fluid power company had approximately 1,100 salesmen and saleswomen. A 22-year-old salesman became the top salesperson at the company. His secret? He created a proposal for every company product. When an opportunity arose, he pulled the proposal from his computer and tailored it to the particular customer and his requirement.

For more information: The author has many additional photographs to augment the points made in this short publication. The material was taken from a PowerPoint seminar that normally runs one day. He can be reached at flinggeorge@yahoo.com.