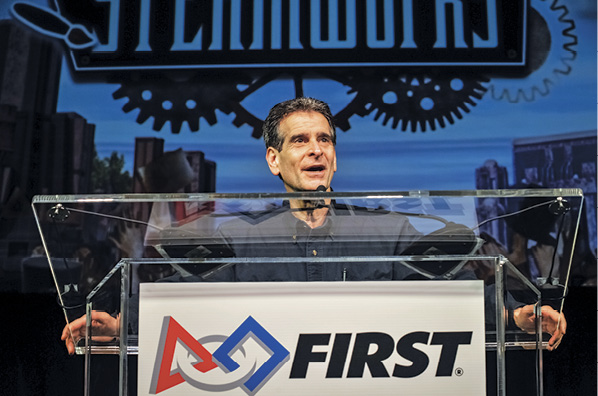 Inventor and FIRST® Founder Dean Kamen launched the 2017 FIRST® Robotics Competition season on January 7 with the Kickoff of a new robotics game called FIRST STEAMWORKSSM before a crowd of more than 1,000 people, including Senator Maggie Hassan (D-N.H.) and Manchester Mayor Ted Gatsas at Southern New Hampshire University in Manchester, N.H., hometown of FIRST headquarters. More than 83,400 high school students on 3,336 teams at 123 venues around the globe joined the 2017 Kickoff via Twitch Livestream.

FIRST STEAMWORKSSM invites two adventurers clubs from an era in which technology relied on steam power to prepare their airships for the ultimate long-distance race. Each three-team alliance scores points and prepares to take flight by building steam pressure, gathering materials to start the rotors and boarding robots onto their airships. The adventurer club with the highest score at the end of the match is the best prepared for the race and wins.

At the Kickoff, teams were shown the game field and challenge details for the first time, and received a Kit of Parts made up of motors, batteries, control system components, construction materials, and a mix of additional automation components—with limited instructions. Working with adult mentors, students have six weeks to design, build, program, and test their robots to meet the season’s engineering challenge. Once these young inventors build a robot, their teams will participate in one or more of the 145 regional and district events that measure the effectiveness of each robot, the power of collaboration, and the determination of students.

FIRST (For Inspiration and Recognition of Science and Technology) was founded in 1989 to inspire young people’s interest and participation in science and technology. Based in Manchester, N.H., the 501(c)(3) not-for-profit public charity designs accessible, innovative programs that motivate young people to pursue education and career opportunities in science, technology, engineering, and math, while building self-confidence, knowledge, and life skills. Visit www.firstinspires.org.