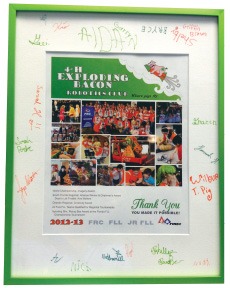 FIRST (For Inspiration and Recognition of Science and Technology) Team 1902 (named “Exploding Bacon”) from Winter Park, Fla., has terrific spirit and pride. The team presented a plaque to the IFPS Chapter 49/50 as a sponsorship thank-you gift. Signatures on the plaque are from both younger and high school teams, due to Exploding Bacon’s care in raising the kids through the ranks by ages. High school participants have been a part of the team family for years. They know the jobs required to produce a winning robot, handle changes on the fly, and also how to mentor younger members, all the way from elementary school. This team is a terrific representation of FIRST’s core belief in Gracious Professionalism. Also, they’re winning on a world-class level.