Stopping a Load with a Shock Absorber

It is common practice to position shock absorbers to cushion loads attached to air cylinders, rather than to subject the air cylinders to shock loading resulting from end-of-stoke impact. This practice allows sizing the cylinder to move the load and sizing the shock absorber to stop moving the load within the required distance.

In motion control, it is desirable that a load be stopped smoothly and without adverse effects such as rebounding or stress upon the machine or part itself.  The speed and mass of the object will determine the best method to accomplish this.

Shock absorbers fall within two categories – fixed or adjustable.  Fixed and adjustable shock absorbers operate on similar principles to a cylinder cushion in that the deceleration is accomplished by forcing internal fluid over a series of restrictions to provide the damping force required.  The advantage of the adjustable shock absorber is that the unit can be fine-tuned over a variety of mass and velocity profiles to achieve precise deceleration.  Another possible variant is to use a self-adjusting shock absorber, which is now offered by several manufacturers.  These typically have a range of self-adjustment, so it is still important and necessary to calculate the amount of kinetic energy to be absorbed.

The typical characteristics of stopping a load fit into one of the six scenarios shown in figure 1.

There are four parameters that must be known to accurately size a shock absorber:

Equation 1 provides for calculating the kinetic energy of the load and equation 2 is used to calculate the applied force.  Each of these is additive and the resulting sum is the total energy to be dissipated.

Equations 3 and  4 provide for calculations to address the vertical load orientations.

The fourth scenario is one where there is not a constant applied force to the load (a possible transfer line application) but the moving object has kinetic energy and the load moving across a conveyor must overcome a frictional resistance.

After calculating the kinetic energy, then equation 5 can be used to calculate the additional applied energy.

The fifth scenario is the impact from a free-falling object. Equation 6 is used to calculate this, and, for this scenario, the total energy forces are due simply to gravity acting on the mass. 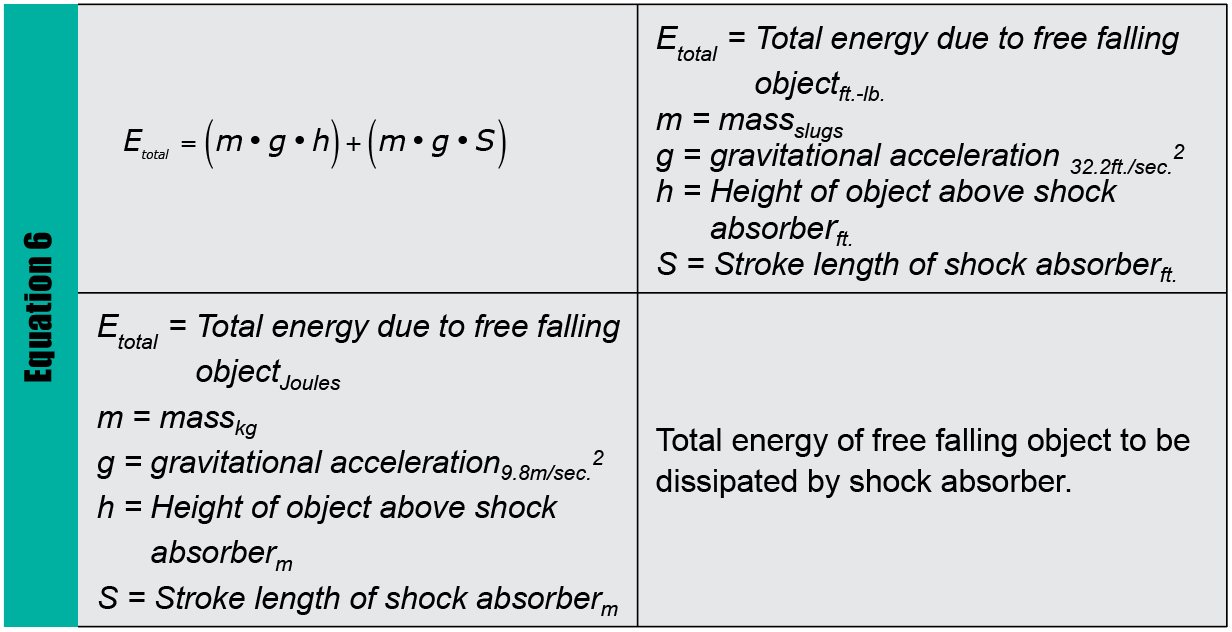 The sixth and last scenario is the total energy due to rotational forces. The total energy to dissipate is the kinetic energy due to the moment of inertia and rotational speed. Additive to this is the propelling force (torque) imparted to the object while rotating, which is calculated using equation 7. In all the scenarios, it is likely that the actual velocity is unknown but can be calculated based on the distance covered in a set amount of time. 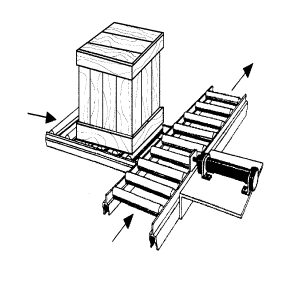 Consider a crate, like that shown in figure 2, rolling into a shock absorber mounted on a conveyor. Since the starting velocity is zero, and, assuming that the crate accelerates uniformly, the average velocity of the crate may be calculated by the following equations.

The average velocity is the distance traveled divided by the time it takes to travel the distance:

Since the starting velocity is zero, the average velocity may also be expressed by the equation:

Since the initial velocity is zero, the last equation may be rewritten as: