A tool supplier called one day asking for help. A fiberglass plant was experiencing problems with one of its compressed air powered tools, a circular saw used to cut large pieces out of the molds. The performance of the tool was sluggish, and the workers complained that the tool lacked power and often stalled, which negatively affected productivity. The tool supplier was blamed for supplying what was thought to be a substandard tool, but as it turned out, the real problem was “the dirty 30.”

Compressed air pressures can vary across the system piping in a typical industrial plant due to friction loss inside the pipes and restrictions to flow caused by system components such as air dryers, filters, regulators, connectors, and hoses. The air pressure might start out at 125 psi at the air compressor, be only 115 psi as it exits the compressor room, then drop only 110 psi by the time it reaches the piping to the end use at the far end of the plant. But in most cases, it is the last 30 feet of piping, “the dirty 30,” where most of the pressure differential occurs.

In the fiberglass plant, a special test was done to assess the issue. A pressure gauge on a T connection was connected to the tool. The pressure was first measured with no air flowing while the tool was at rest. A second test was done with the tool running. The readings were compared. The initial pressure was about 118 psi, but with the tool consuming air, the pressure dropped to only 44 psi, a difference of 74 psi. To operate correctly, this tool needed at least 90 psi.

It was fairly easy to determine the cause of the pressure differential. The molds being cut were about 30-feet long, requiring a fairly long air hose to access both ends freely without restriction. To make work with the tool easier, a long ¼-in. hose on a retractable hose reel was used. The connection to the reel was supplied through a ¼-in. quick-connect coupler. A second coupler had been installed midway along the hose where a hose extension was added. A third quick-connect coupler was located where the tool was connected. Each of these elements contributed to a portion of the large pressure loss.

This tool consumed about 15 cubic feet per minute when it operated at full output. A check of the pressure drop of the 50 feet of ¼-in. hose showed a rated pressure differential of 40 psi. Each quick-connect coupler contributed slightly over 10 psi to the total pressure drop. There wasn’t anything wrong with this tool; the piping and connectors running to it were too small. 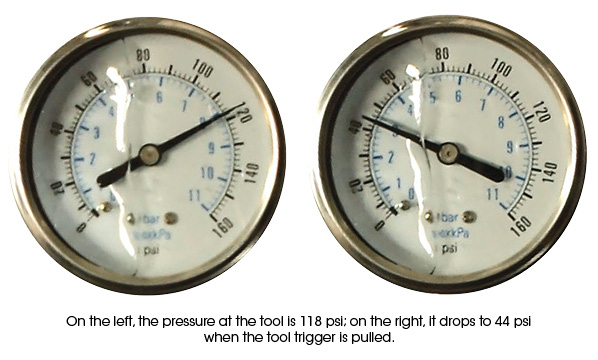 What was just described is a common problem in industrial plants. A standard size of hoses and connectors is often applied to all compressed air powered equipment in the plant as a standard installation with little regard to the varying flow rates of the different types of equipment. This policy saves on the number of parts you must stock in the stores department, but it causes problems when a tool requires higher-than-average flow rates. Small tools will have small pressure differential, but large consumers of compressed air will be starved for pressure, causing poor performance. 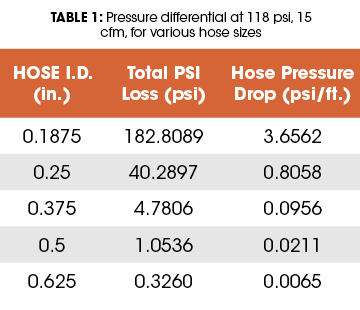 In this plant, the discharge pressure of the compressor had been jacked up as high as it could go. This higher pressure causes the air compressor to consume about 1% more power for every 2 psi of extra pressure. In addition, any unregulated compressed air will consume about 1% more air for every 1-psi increase in system pressure. All this adds up to higher ongoing electrical costs for the compressed air system due to wasted energy.

The solution to the problem can be seen by examining Table 1. If a 3/8-in. hose size is selected, the pressure differential reduces substantially. This installation was upgraded to larger size hose, and all but one quick connector was removed. A new 3/8-in. full-flow quick-connect coupler was installed to further reduce connector loss. As a result, the tool now receives 92 psi and is performing wonderfully. Further improvement could have been gained by increasing the hose and connector size even larger to the next largest size.

During a recent plant tour, the cutter operator gave us a big thumbs-up for making his work life much more productive.

By Ron Marshall for the Compressed Air Challenge

Learn more about pressure loss at a Compressed Air Challenge seminar. For a schedule of events, visit www.compressedairchallenge.org.