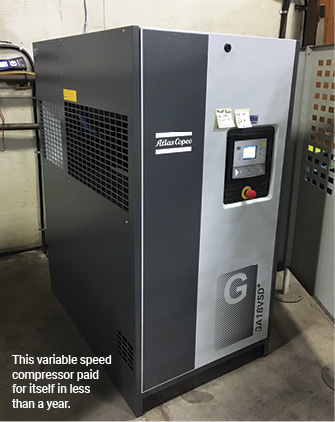 Nobody likes when a compressor goes down and needs to be replaced due to some sort of age-related component failure. Then comes the challenge in choosing the new unit, and figuring out how to pay for it. But, you should be aware that this may also be a time of great opportunity, where a new, more efficient system might be put into place with only a slight increase in cost. Perhaps the use of incremental costs on the project estimate, and some available utility incentives, might help persuade your management to let you upgrade to a more efficient system that might pay for itself in a few short years.

Incremental costs are expenditures that are over and above what you would normally spend on a “business as usual” project. Perhaps you have money in the budget to replace your existing, aging fixed speed compressor with a newer unit, exactly the same size and type. This is the base cost, completing a project like this will typically get you the same electrical operating costs as you had with the previous compressor. But, you could possibly do more. Instead of a fixed speed compressor, you may consider purchasing a more efficient variable speed unit that consumes less power. You may also want to look at upgrading the compressor connection piping to a larger size and the compressed air filters to units with a lower pressure differential. You could also consider purchasing a new cycling air dryer that may save you some power consumption, and a larger storage receiver capacity to stabilize your plant pressure. All of these will add to the cost of the project, but the costs are incremental, small additions to what you would have spent anyway.

Let’s consider a sample project at a heavy equipment service shop. The project involved the replacement of a failed 15 hp lubricated screw compressor with smaller than required storage receiver capacity. System measurements with data loggers showed the unit and its associated air dryer ran all the time on a 24 x 7 basis, mostly unloaded, consuming $7,400 worth of electricity per year while producing only an average of 10 cfm. The replacement cost of purchasing and installing a new compressor similar to the old was estimated at about $15,000. This compressor, over ten year period, would have consumed about 5 times its purchase and install cost in electricity.

Installing a new, more efficient variable speed compressor with an internal cycling dryer will cost more initially, an estimated $22,600. This unit will run much more efficiently, however, starting and stopping during light loads, and running in variable mode at higher flows. The newer design of this unit consumes less power than the original, and operating the unit at lower pressure saves power. This compressor, under similar conditions, will consume only $2,300 in annual electrical costs due to the elimination of wasteful unloaded run time, about one third the previous consumption, saving $5,100 in annual electricity costs. And the operating time will be about 80% less than the previous compressor, saving maintenance costs.

If this project was evaluated on the total purchase price, the simple payback of the project works out to 4.4 years, not all that attractive to the bean counters, but still quite good, equivalent to a bank account interest rate of about 22 percent. But, if evaluated on the incremental costs, you are spending just $7,600 more, and the simple payback works out to 1.5 years, an interest rate of about 67 percent on the extra money invested. That will get the attention of management!  And if the project can gain some additional utility incentive, it may be possible to achieve a payback on the incremental costs of less than a year.

Over the years many compressed air users have invested this kind of money and achieved similar proven savings when upgrading their systems to more modern energy-efficient design. This should be considered when it comes time to replace your air compressor in the future. Many times your service provider will be able to help monitor the efficiency of your existing system and calculate what savings could be gained. Call them in today and set yourself up for future savings.

One thought on “Using Incremental Costs for Compressed Air Projects”