What Business Are We Really In? 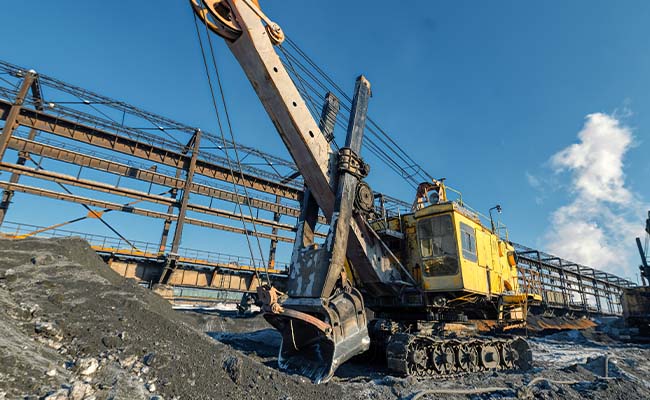 In the current age of “tech,” no one would seriously consider hydraulics to be a disruptive technology. But beginning around 1947, hydraulics began its slow and relentless ascent in the excavator market, an ascent that hasn’t actually stopped, and one that ultimately put most of the once-iconic rope-shovel manufacturers out of business.

One of the ways the likes of Bucyrus Erie, Marion, and P&H (now owned by Komatsu) survived this multidecade advance of hydraulics on their patch was to move up the food chain. They concentrated on large draglines and rope shovels for strip and open-cut mining. But even that didn’t make these companies safe for long. Led initially by German manufacturers Demag (now owned by Komatsu) and O&K (now owned by Caterpillar), and later Liebherr and the Japanese manufacturer Hitachi, hydraulic excavators became big enough to seriously threaten this segment of the market too.

The mining-size shovel started to come under attack from hydraulic machines in the late 1980s. So not only was I around to see it, I was involved in it to some extent. During the 1990s I tried in vain to help P&H save their too-little-too-late foray into hydraulic mining shovels. The 2250 was the bigger of P&H’s two hydraulic shovel offerings, and it was ridiculously unreliable.

I worked with P&H in Australia to fix the machine’s problems. The effort failed in the end, not because the problems were insurmountable, but because the local branch office was reluctant to do anything significant unless it was approved by head office in the U.S. And as history now shows, head office wasn’t committed, or committed enough, to having a reliable hydraulic shovel.

When new and potentially disruptive ways of doing things first appear, they are often seen as having limited market appeal and therefore penetration, particularly by the established incumbents who are ultimately threatened by them. When the first hydraulic shovels appeared on the scene, they were small and clunky by today’s standards. As a result, they only appealed to a small percentage of P&H’s customers. So the threat was easy for P&H to dismiss. The problem for P&H and its rope shovel brethren was that hydraulic shovels kept getting bigger and better, to the point where they won enough market share to materially affect P&H’s business – and survival.

What hydraulics did to the rope-shovel market is analogous to what electric drive technology is doing to many traditional markets for hydraulics. It’s my contention that a multidecade disruption of the hydraulics business by a new generation of electric drives – both rotary and linear – is underway. While this threat can be largely ignored for now, the above example suggests it is perilous to do so indefinitely.

This is not just a clash of competing drive technologies. It’s also shaping up to be a battle of perception. And on this front, electric drives occupy the high ground. Rightly or wrongly, the increasing global acceptance of climate change, and “greenhouse gases” as its causation, means that fossil hydrocarbons in all their forms have an image problem, one that goes beyond burning coal or gas for electricity generation.

The internal combustion engine car is now seen as old and dirty technology to be phased out and replaced with electric vehicles, the batteries of which are recharged from clean energy sources. Plus, and this is by no means trivial, the shift to electric vehicles gets billions of gallons of petroleum-based lubricating oil out of circulation.

This ground shift means it’s only a matter of time before hydraulic systems containing petroleum-based fluids are seen in a similar negative light. We’ve long known that hydraulic oil leaks are environmentally damaging, and this issue is a black mark against hydraulics that has never gone away. What I’m talking about here is different. It’s guilt by association: being seen as fossil hydrocarbon dependent, and, by extension, environmentally unacceptable and outdated technology.

We now have other types of hydraulic fluid available to us. But they come at a cost in terms of price, performance, and reliability. Petroleum-based hydraulic oil is popular because it’s effective, reliable, and affordable. And while there are alternatives, it has no obvious successor at this time. The multidecade shift away from fossil hydrocarbons that is currently underway means a suitable “green” fluid must be developed and accepted, and for hydraulics’ image in the marketplace, the sooner this happens the better.

Moving away from petroleum-based fluids is essential for hydraulics to compete on a more level playing field with electric drives. But it won’t guarantee long-term survival. The only defense against extinction is understanding the business you are really in. P&H and company weren’t in the rope-shovel business; they were in the earthmoving business. Kodak wasn’t in the film camera business; it was in the business of recording memories.

Similarly, we are not in the hydraulics business. Or the pneumatics business. We’re in the drive and control business. As professionals working in the drive and control business, we need to be just as comfortable with PLC/PAC control as we are with load-sensing control. Just as familiar with a stepper motor as we are with a gerotor motor. This means fluid power education must become more multidisciplined. Our ongoing training and professional development have never been more important than it is now. Our survival depends on it.

Brendan Casey is the founder of HydraulicSupermarket.com and the author of numerous books and training programs. A fluid power specialist with an MBA, he has more than 30 years’ experience in the design, maintenance, and repair of mobile and industrial hydraulic equipment. For more information, visit www.HydraulicSupermarket.com.