A Mighty Wind from a Tiny Source

Today’s commercial van manufacturers are changing the game by delivering new Euro-style vans to North America. These new platforms boost fuel efficiency and increase cargo space dramatically. While these vehicles offer state-of-the-art engines, reduced emissions, and roomy vehicle platforms, they have drastically reduced the amount of under-hood space usually allocated for engine-driven aftermarket components, such as air compressors, secondary alternators, and hydraulic systems. Generally, mobile service businesses and municipalities buy these vehicles and outfit them with engine-driven accessory systems for the many important tasks they do every day.

Although there is limited under-hood space available, most vans have an option to mount a secondary alternator. Dual alternators are used in many vans that are converted into ambulances or emergency vehicles to meet those specialized vehicles’ electrical needs.

North American commercial vehicle regulations have made the vans a necessary option for many fleet managers, and these vans are being used more and more in the mobile service industry. Unfortunately, they lack a viable option for running air tools. The choices had been limited to very small CFM electric compressors and gas engine-powered compressors mounted in the van that took up significant room, had to be vented for exhaust and gas fumes, and posed safety hazards while filling the fuel tank.

With under-hood space becoming harder and harder to get, manufacturers of under-hood air compressor systems, like Vehicle Mounted Air Compressors (VMAC™) in Nanaimo, Vancouver, British Columbia, were faced with the significant challenge of designing a system for this growing market that would fit into the small under-hood location usually reserved for the small second alternator. Traditional under-hood air compressor systems, such as VMAC’s 70-cfm VR system, simply would not fit on these new platforms. Compact packaging ideas were demanded in three areas: the air compressor, its electro-magnetic drive clutch/pulley, and its oil cooler/separator.

The first challenge was fitting the compressor in a space designed for a vehicle alternator. VMAC had to start with a blank slate and broke a number of traditional compressor design norms to achieve the goal. A unique, patented, air intake through the front of the rotors helped keep the envelope size compact. Eliminating the inlet valve and using a check valve to replace it also reduced space and simplified the design.

As in life, timing is everything. The call for a smaller air compressor began coincidentally in 2009 when VMAC’s loyal customers, through their dealer network, demanded a smaller, half-cost, and half-output version of the VR70. This was well before the introduction of the new Euro-style vans, but its 2009 start gave VMAC a fortuitous five-year head start to perfect a solution for a problem that didn’t even exist at the time. It was this market-driven demand for a simple half-air, half-cost system that lead to the small, high-performance air compressor called the UNDERHOOD LITE.

The challenge would involve many aspects of the entire air compressor system and not just the individual components, as a reduction in output of a rotary screw compressor does not necessarily mean a cost reduction. A key design feature of the 70-cfm system is the addition of a dedicated second pulley (and belt) mounted to the OEM engine crank pulley. This feature is designed to handle side-loading issues on the accessory bearings in the belt line. A smaller output compressor would likely not affect the OEM component load as such. The necessity of running the compressor off of the existing OEM single-accessory drive belt was born.

A team of engineers was tasked with using an existing VR70 compressor to prototype a gearless version to meet the lower output and lesser-cost portion of the scope. This was quickly done, and a quick bracket design was manufactured to mount on one of the company’s vehicles to see if using the OEM belt was feasible. Initial testing proved that this concept was a winner in terms of reducing the number of components, cost of the compressor, and reducing the output. The challenge was that the size of the compressor was still somewhat large to mount in areas to take advantage of using the OEM belt.

VMAC’s newly formed Product Development Department was given the task of building a compressor that met the entire scope; it had to be small, cost-effective, 30 to 35 cfm, and able to deliver the results VMAC’s dealer network demanded. Jim Hogan, VMAC’s president, initiated a couple of last-minute twists into the project. First, he wanted the compressor designed to fit into the second alternator position of the very space-limited Ford SuperDuty 6.7L PowerStroke Diesel. Second, as an admirer of Francis L. Zrostlik’s (co-founder of Iowa Mold Tooling and Stellar Industries) early under-the-hood reciprocating compressor design, Hogan also requested that the new VMAC compressor system borrow heavily from the very simple controls and operation of those early compressors.

Another key to the compressor design was simplifying the controls. VMAC decided to cycle a clutch from Ogura Industrial Corp., an electromagnetic clutch manufacturer in Somerset, N.J., to control the compressor and also to reduce the cost, size, weight, and the number of components being used. This option was chosen and implemented to meet Hogan’s second challenge of emulating a reciprocating control system. 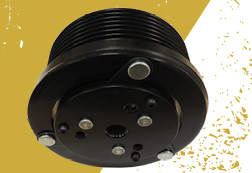 The clutch itself was a custom prototype built by Ogura. This high-torque clutch utilizes a very small diameter 85-mm pulley that enables the compressor to be effectively geared higher to reduce the offset in diameter of the OEM crank pulley in relation to VMAC’s 70-cfm designs.

Ogura designed an 85-mm OD, 8-groove Poly V production clutch capable of driving the anticipated pump loading (>15nm) while cycling flawlessly at running speeds exceeding 7,000 rpm. The clutch components and bearing design are viable for up to 10,000 rpm continuously, providing plenty of a safety margin. The 7,000-rpm pump requirement is the result of the ratio between the clutch’s 85-mm pulley and the crank’s 200-mm diameter (typical), and the engine’s RPM redline. These high-compressor speeds were necessary to drive the compressor rotors one-to-one with the drive pulley (there is no internal compressor gearing). This gearless design works to cut costs, improve expected life, and simplify assembly.

Typical under-hood automotive clutches (such as the AC compressor clutch) use multi-pole flux-directing technology to increase magnetic clamping forces. It is this magnetic clamping force that creates torque to transmit power from the pulley to the compressor. Most multi-pole clutch flux-directing techniques incorporate circumferentially linked air slots together with low carbon steel radial spokes evenly spaced in the clutch rotor (pulley input) and armature plates (output to air compressor) for strength. While the steel spokes add radial strength to the pulley, they provide a short (circuit) to the flux path. This short (circuit) reduces the efficiency of the magnetic system and would yield lower torque from the clutch (lines of magnetic flux will pass through steel faster than through air). For higher torque, the MAE-MG43 clutch from Ogura does away with traditional flux-directing techniques by eliminating the steel structural spokes, replacing them with a structurally strong, but magnetically neutral, material creating a near-100% efficient magnetic circuit. This allows the clutch to transmit the torque of a clutch nearly twice its size.

To provide long life and to handle the increase in clamping forces on the smaller diameter, the clutch integrates a stable, high-performance proprietary friction material embedded in the rotor pulley. This material is suitable for under-hood environments and is impervious to typical contaminates, such as water, antifreeze, engine oil, and grease.

The clutch rotor is supported by a NSK custom-designed 47-mm OD double-row ball bearing, lubricated for life. The unique snout-mount bearing design keeps raceways constantly in motion and properly lubricated (whether the clutch is engaged or not). The snout-mount design eliminates bearing brinelling issues caused by extended engage times in some earlier clutch designs. To help with quick assembly, disassembly (if needed), and solid torque transmission to the pump, the Ogura JIS splined armature hub bore is center tapped for easy installation to the pump shaft.

The compressor control system was then simplified to include only basic components: an on/off, temperature and pressure switch and indicator lamp, two relays, as well as a simple one-speed throttle. With the compressor and control system designed, the next step was set in motion. 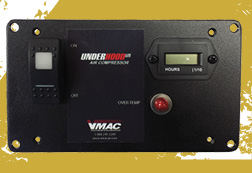 With compressor in hand, VMAC engineers quickly designed a small bracket for the 6.7 PowerStroke and indeed fit it into that alternator position; however, just designing a new compressor to fit into tight spaces did not necessarily address the entire cost problem.

With the Ogura clutch prototypes designed, delivered, and in test, VMAC concentrated on the final parts of the new system. One of the areas to improve cost to the final customer would be designing components that would ease the installation and reduce the time to complete the job. The product development team revisited some older experiments to find inspiration and discovered that an idea of integrating cooling and oil separation into one package seemed to fit the bill. Various designs were built and tested. Using VMAC’s WHASP tank removed the need for integration into the vehicle’s cooling system, moved both components to one place, and made for a quick install.

With the major components finalized, VMAC then turned to a few of its selected dealers to move the product line into the market, at the same time that the European-style vans were being introduced into the North American market. Looking back to that day in 2009 and the challenge presented by the advisory group, VMAC found that the UNDERHOOD LITE with the Ogura clutch enabled its dealers to install a cost-effective rotary screw compressor system under the hood of mobile service vehicles for current markets and the new ones yet to come.

Reinforce your industry experience with a Pneumatic Mechanic, Technician, or Specialist certification. Apply online at www.ifps.org.