A Planned Outage Spurs a Unique Approach for Turbine Maintenance

When power plant managers realized their scheduled window for a steam valve outage was challenging, engineers came up with a new tactic for servicing a dozen actuators and steam valves in less than 12 days. 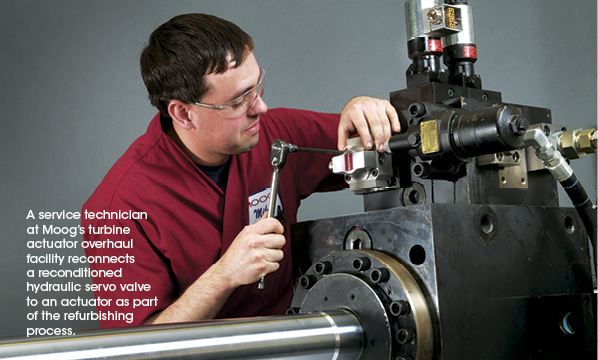 Steam valve actuators are large pieces of technology, each measuring approximately 2.4 meters in length, 1 m. in diameter, and weighing 1,350 kg. Maintenance is not easy due to the size of the actuator, but a short outage window for maintenance created an even bigger challenge for engineers at the Dominion Virginia Power’s 585-MW Virginia City Hybrid Energy Center (VCHEC). When you produce electricity to power nearly 150,000 homes, you cannot afford any delays or additional downtime. The plant’s two Foster Wheeler boilers create the energy to run a 688-MW steam turbine made by Toshiba.

According to Toshiba’s recommended maintenance schedule for the VCHEC’s turbine, plant managers are expected to conduct a “steam valve outage” every three years to assess the condition of the turbine’s actuators and valves. In 2015, after three years of operation, plant managers scheduled an outage to inspect, among other things, the turbine’s steam valves. It was the first outage of its kind at the plant. The VCHEC’s managers realized the 12-day maintenance window was a tight schedule within which to affect maintenance on such large actuators.

For a steam turbine to operate at peak efficiency, steam is precisely admitted to the turbine at multiple set pressures and may be reheated or recycled as part of the process. There are also critical stop and vent functions to prevent turbine over-speed, or to simply facilitate a controlled shutdown. The Toshiba steam turbine required 12 steam valves to perform these functions, all equipped with Moog hydraulically operated actuators. Four are control valves; eight serve as “stop” valves. Unlike the control valves, which are constantly moving back and forth to regulate flow, the stop valves open and close for long periods of time. In turn, actuators control the opening of the valves via circuits that determine the correct amount of steam to send to the turbine. To inspect the valves properly, crews must remove the actuators.

When conducting maintenance at a plant, the steam valves themselves are very large and traditionally rebuilt at site, and the actuators are often sent to the OEM’s repair facility for repairs and refurbishment. But the turnaround time for refurbishing a large number of actuators off-site using a traditional approach would have derailed the maintenance schedule for Dominion’s VCHEC. So Toshiba America Energy Systems asked Moog, the maker of the turbine’s actuators and valves, to assess the situation.

Moog worked jointly with Toshiba and VCHEC to develop a plan to meet the 12-day outage window. A hybrid approach was chosen, refurbishing some units at the site, while overhauling the remainder in Moog’s factory. The physical location of the actuators made it difficult to perform any meaningful inspections while the plant was operating. As the actuators in “stop” service were not exposed to the degree of travel and wear as the control valves, the team scheduled the actuators for site refurbishment. The four control valves were to be sent to the factory for a complete overhaul. This strategy allowed the work to be performed in parallel, compressing the overall schedule.

Moog developed repair kits for each actuator, and orders were placed to allow lead-time for non-stocked items. Safety stock was also established as a safeguard to ensure availability of an actuator in case one of the working actuators had abnormal wear characteristics requiring parts not included in the kits.

To carry out an on-site test of the actuators and valves, maintenance engineers needed hydraulic power. However, it was determined that when the turbine was shutdown, there was no hydraulic power to draw from. To overcome this, Moog designed and built a portable hydraulic test cart with an integral hydraulic power unit (HPU).

Once the outage began, the customer removed the steam valve assemblies from the turbine with the assistance of a rigger. The actuators were then removed from the steam process valves and either staged in the turbine hall where the site work was to be performed, or loaded on a dedicated “hot shot” truck for delivery to the Moog factory. 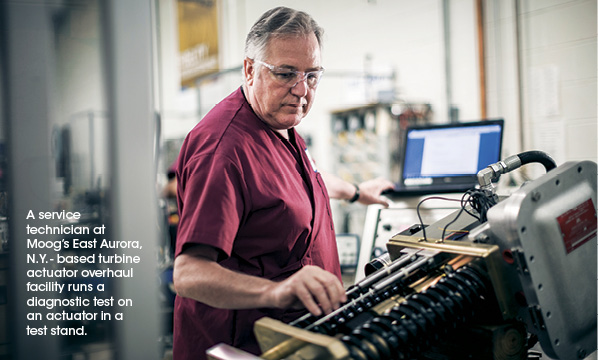 Moog sent a two-person field crew – consisting of a field service engineer and technician – to refurbish the eight actuators on-site. All servo valves on the actuator were sent back to Moog’s factory and given expedited service. This process ensured the servo valves were back on site within three days. During this time, the on-site field crew replaced the seals and the consumable control-related components. Internal cylinder bore surfaces were inspected with a boroscope to minimize disassembly.

Once the servo valves were reinstalled on the actuator, the crew used the test cart to confirm the safety failsafe functionality and internal leakage rate (to ensure the seals were working). The technicians ran the actuator through several full-stroke cycles. Once each actuator was cleared for operation, the rigger installed the steam valve and put them back into place on the turbine.

The field crew sent the four control valves to the Moog factory for overhaul. To meet the outage window, two shifts were deployed. These units went through Moog’s exacting overhaul program and, when completed, each was tested to the same specifications and used the same procedures as when the new Toshiba turbine was delivered several years earlier. The factory overhaul process replaces bearings and replaces or refurbishes rods, where a field refurbishment is limited to seals and soft goods.

The field crew completed its work at the VCHEC in ten days. The factory completed the overhauls in eight days. The unique approach to send some units to the factory and refurbish others on-site provided the optimum balance of speed, performance, and quality. For the customer, some key benefits to using the actuator OEM for the servicing and repair of the technology are access to the expertise of the service professionals, use of authentic components, and the renewal of the warranty. The hybrid program also met the plant’s maintenance schedule and ensured the equipment would perform up to original specifications.

In the meantime, and in anticipation of the VCHEC’s next outage, Moog is evaluating the data from these inspections and will assist Toshiba and VCHEC to determine the plan for the next outage. In addition to outage scope and schedule, the team is evaluating the possibility of future upgrades to further extend the life of the turbine’s actuators and servo valves. The recommendation will include the best schedule for repair and overhaul to ensure a long operating life.

About the author: Steven Beddick is an aftermarket specialist for Moog Industrial Group, a division of Moog Inc. He has nearly 30 years of experience with application engineering support for industries ranging from automotive to power generation. Beddick holds a bachelor’s degree in electrical engineering from Grove City College. Contact him at sbeddick@moog.com.