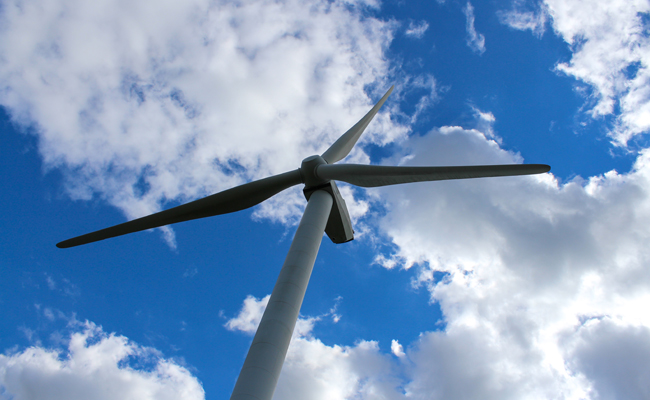 With an increasing drive toward renewable energy, wind power is now globally accepted as a leading technology to deliver “green” energy. Well established in Europe for the past 30 years, other countries worldwide are embracing wind energy as a clean, reliable source of power. China has committed to generating 50% of domestic power from wind energy. At the same time, Denmark is close to being self-sufficient in wind power generated offshore in the North Sea. However, as more countries become reliant on wind power, there’s been an increased focus on turbine asset reliability to ensure peak power production at low overall operating costs.

Conceptually, wind turbines are simple in design, consisting of a rotor that converts rotational energy into electrical energy through a generator. Rotational motion transfers to the generator through the drive train, which often, though not always, consists of a gearbox to increase shaft speeds of the rotor to drive the generator. Because wind turbine gearboxes are critical, significant research, engineering, and design have gone into their reliability with good effect.

However, the same focus has not been spent on wind turbine hydraulics. Not every turbine uses hydraulics, though it is estimated that approximately 50% of them have some form of hydraulic system, a trend that is likely to grow as the size of rotors increases, requiring greater torque (force) to change the angle (pitch) of the blades.

Hydraulics performs several roles in wind turbine operations. The most common is brake and pitch control. Pitch refers to the angle of the blade. To maximize power production efficiency, blade pitch angles are constantly adjusted through a proportional valve-controlled system. The brake refers to a braking mechanism used to slow and lock the rotor from turning under adverse conditions, for example during high wind speeds. This is a safety mechanism that is required to prevent overspeed of the turbine, which could result in structural failure and damage.

Some turbine designs use hydraulic rotor and yaw systems to control the movement of the nacelle to yaw (rotate) in and out of the wind. This is to optimize production and prevent damage or failures during extreme conditions.

While wind turbine gearbox repairs and replacements can cost up to $500,000, hydraulic failures cost far less, ranging from $20,000 to $30,000 to replace failed pitch cylinders. However, as we become more reliant on wind power to provide base power loads, avoiding downtime through optimum maintenance of the gearbox and hydraulic system becomes a strong focus, particularly for self-performing owner-operators responsible for maintenance and operational costs. Many wind farms operate under power-purchase agreements that contain severe fines and penalties for unscheduled power interruptions.

The complexity of performing maintenance 80-120 meters (270-400 feet) in the air means that any “up-tower” maintenance task comes with additional challenges. The work requires specialized training and safety procedures, a necessity exacerbated by the growth of offshore turbines with drastically greater safety hazards. 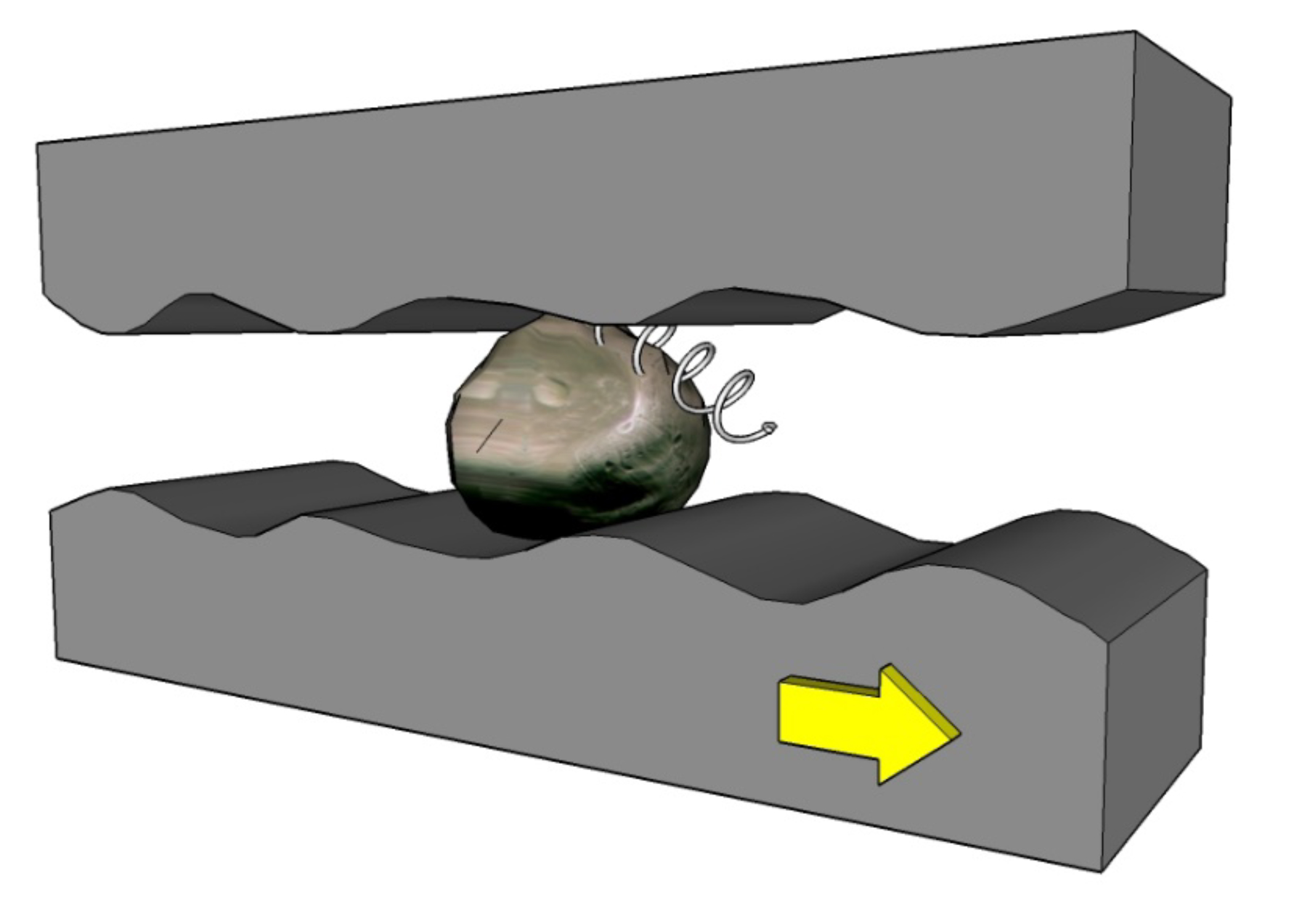 With contamination, common causes include solid particles ingested from the outside or internally generated due to wear, moisture from humidity in certain regions, and degraded fluid from poor lubricant management.

Perhaps the most damaging is solid particle contamination. When a particle trapped between two surfaces removes material from one of those surfaces, the result is what’s known as three-body abrasion (see figure 1). As much as 66% of lubrication-related wear is attributed to three-body abrasion. Hydraulics are particularly prone to it because of the tight clearances found in high-pressure components. Even if outright failure does not occur, particles trapped between the moving surfaces of a valve can result in an effect known as stick-slip, in which the valve momentarily locks while the particle is lodged between the surfaces. Stick-slip can result in suboptimal pitch controls.

Another common problem with wind turbine hydraulics is seal failure and resulting fluid leakage. For an industry that prides itself on delivering “clean” energy, this is not only a direct cost but an environmental concern. While hydraulic seal failure can occur from several factors, it is estimated that 22% of failures are due to contamination from abrasive wear. 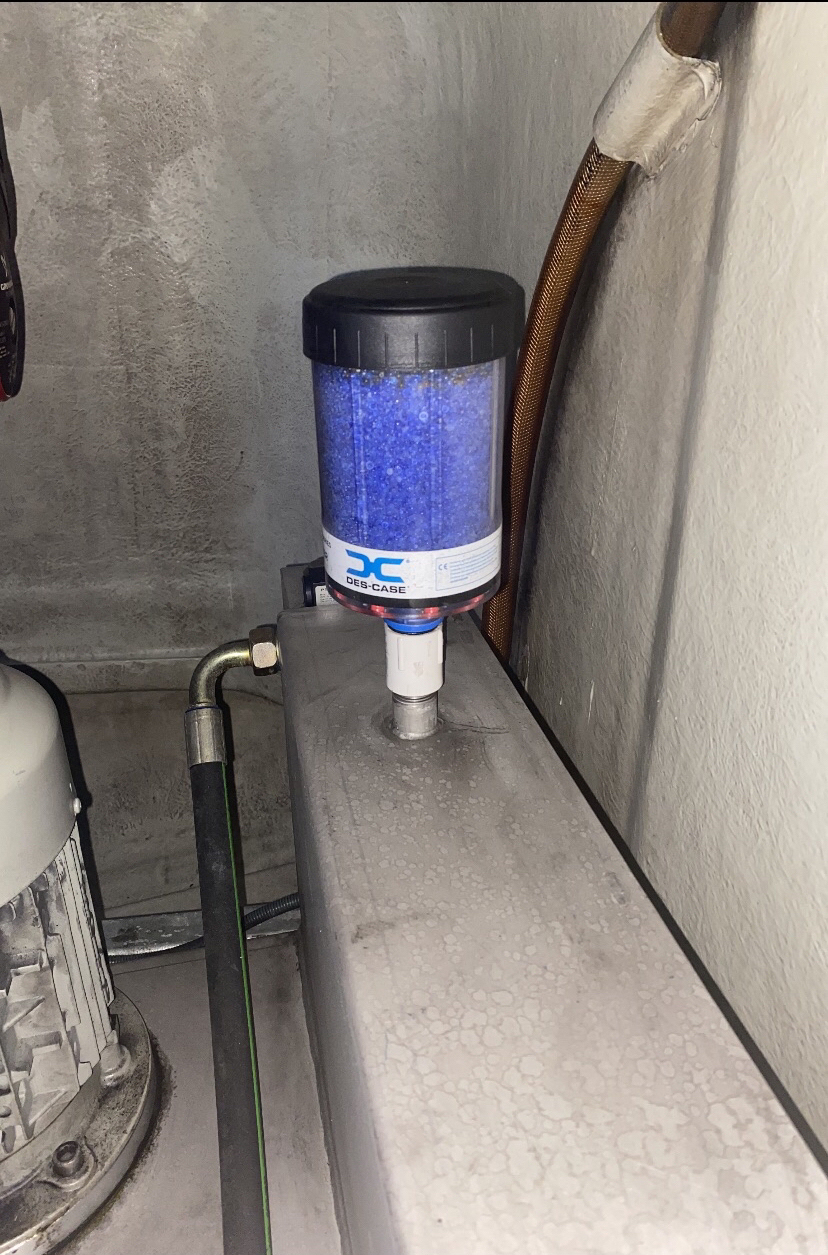 While some wind farms are located in desert environments, many onshore ones are found close to a coast due to the favorable wind conditions. Similarly, a significant and increasing number of wind farms are located offshore. These environments make for challenging operating conditions. The combination of high humidity, elevated operating temperatures inside the nacelle, and the fluctuating ambient conditions due to temperature shifts leads to high moisture content, which can cause rusting and hydraulic pump cavitation, as well as contribute to fluid degradation and varnish formation.

The easiest way to protect a wind turbine hydraulic system from moisture contamination is with a desiccant breather to dry and clean the air that enters during normal operations and to create a dry headspace environment inside the reservoir (see figure 2). Just like placing a sachet of desiccant inside a sealed box of consumer electronics, desiccant breathers are effective at preventing damage to the hydraulic fluid by actively drying the headspace and enhance the oil due to the effect of Henry’s law.

Desiccants are effective in eliminating moisture from wind turbine hydraulics. They also play a role in controlling particle contamination by preventing particle ingress from the outside during volumetric exchange or thermal syphoning. High-quality desiccant breathers contain filter elements that offer 99% efficiency at preventing particles down to
1 micron from entering the system.

However, desiccant breathers alone will not help achieve fluid cleanliness below the recommended ISO 16/14/11 target. To attain optimum fluid cleanliness, turbine operators must carefully select and maintain full-flow hydraulic filters. Filters with a beta efficiency in excess of 1,000 at 3 microns are recommended. Filters should be properly installed, properly maintained, and replaced before they plug and go into bypass.

Even with desiccant breathers and high-efficiency full-flow filters, harsh operating conditions keep wind turbine hydraulic systems from achieving optimal particle and moisture targets. Because of this, wind turbine operators should take routine oil samples every 3-6 months to measure contamination levels along with fluid and component health. These inspections should include particle counting using the ISO 4406 standard and an accurate water test using the ASTM D6304 Karl Fischer moisture method. 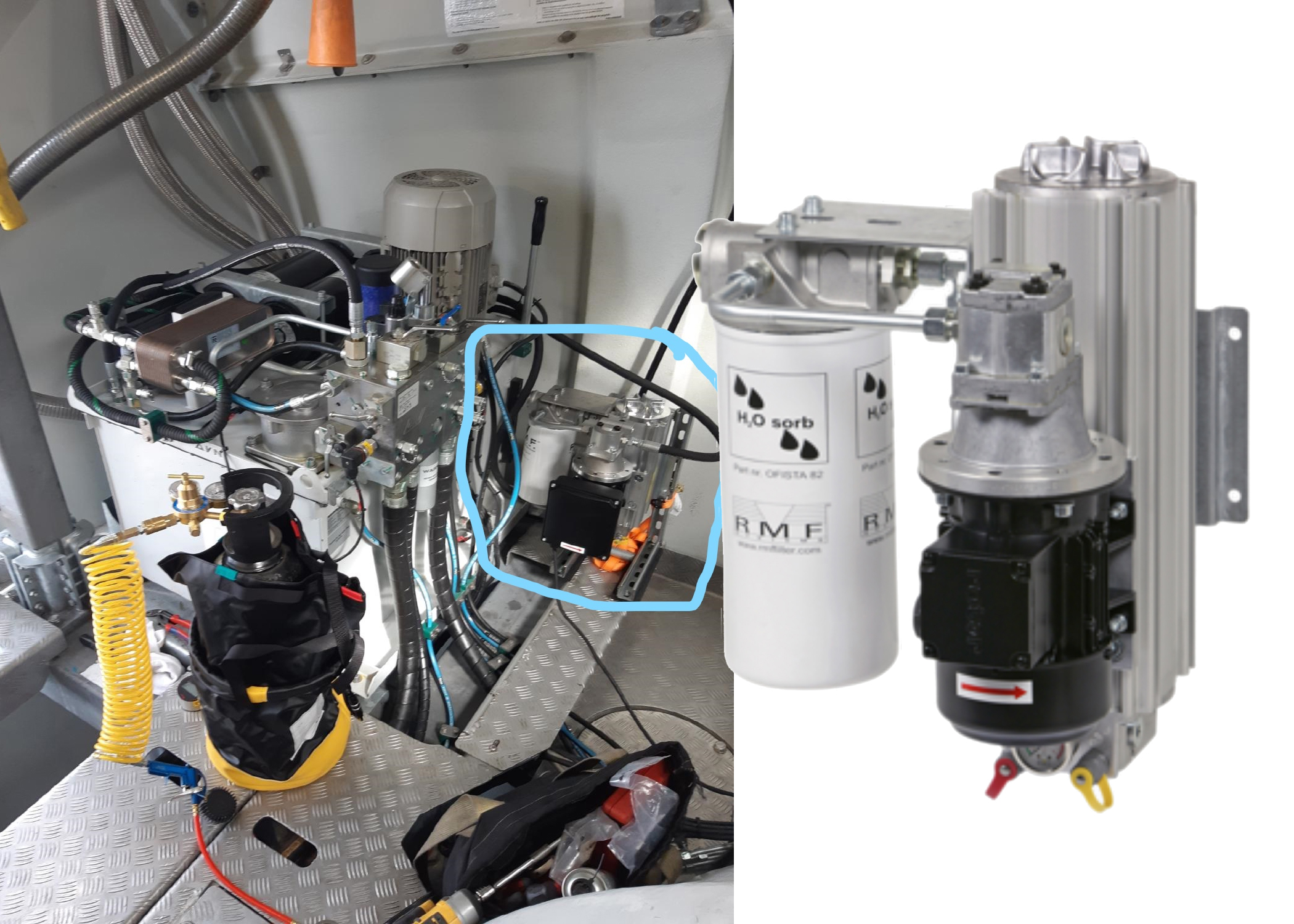 Operators who cannot meet the required cleanliness and dryness targets should consider supplemental offline filtration. Installed in kidney loop fashion – drawing off the reservoir and returning the cleaned fluid back to the oil sump – offline filtration is an economic way to improve particle and water levels (see figure 3). These systems are equipped with a radial depth media element with a beta efficiency in excess of 2,000 at 2 microns and a superabsorbent polymer to remove free and emulsified water. They can quickly reduce contamination to optimum levels.

Aside from particle and moisture problems, varnish is a common but often overlooked contaminant. Varnish is a sticky resinous material caused by the degradation of the hydraulic fluid through a combination of thermal and oxidative stress. While the term varnish applies to many tribological mechanisms, its result is deposits inside the reservoir, cylinders, accumulators, and cooler. Left unchecked, varnish can plug the filter and further exacerbate valve stiction issues by serving as “flypaper,” helping particles stick and remain trapped inside the valve. Wind turbine hydraulic systems are a prime breeding ground for varnish due to changes in ambient temperature and high humidity.

Fortunately, radial depth filtration can control varnish, as it does for particles. Oil flows through hundreds of layers of cellulose media, trapping varnish and its precursors in the filter, and halting the cycle of varnish formation and deposition. Removing insoluble varnish from the oil increases the hydraulic fluid’s solvency, dissolving some of the “back-on” deposit into the oil to be extracted through offline filtration. 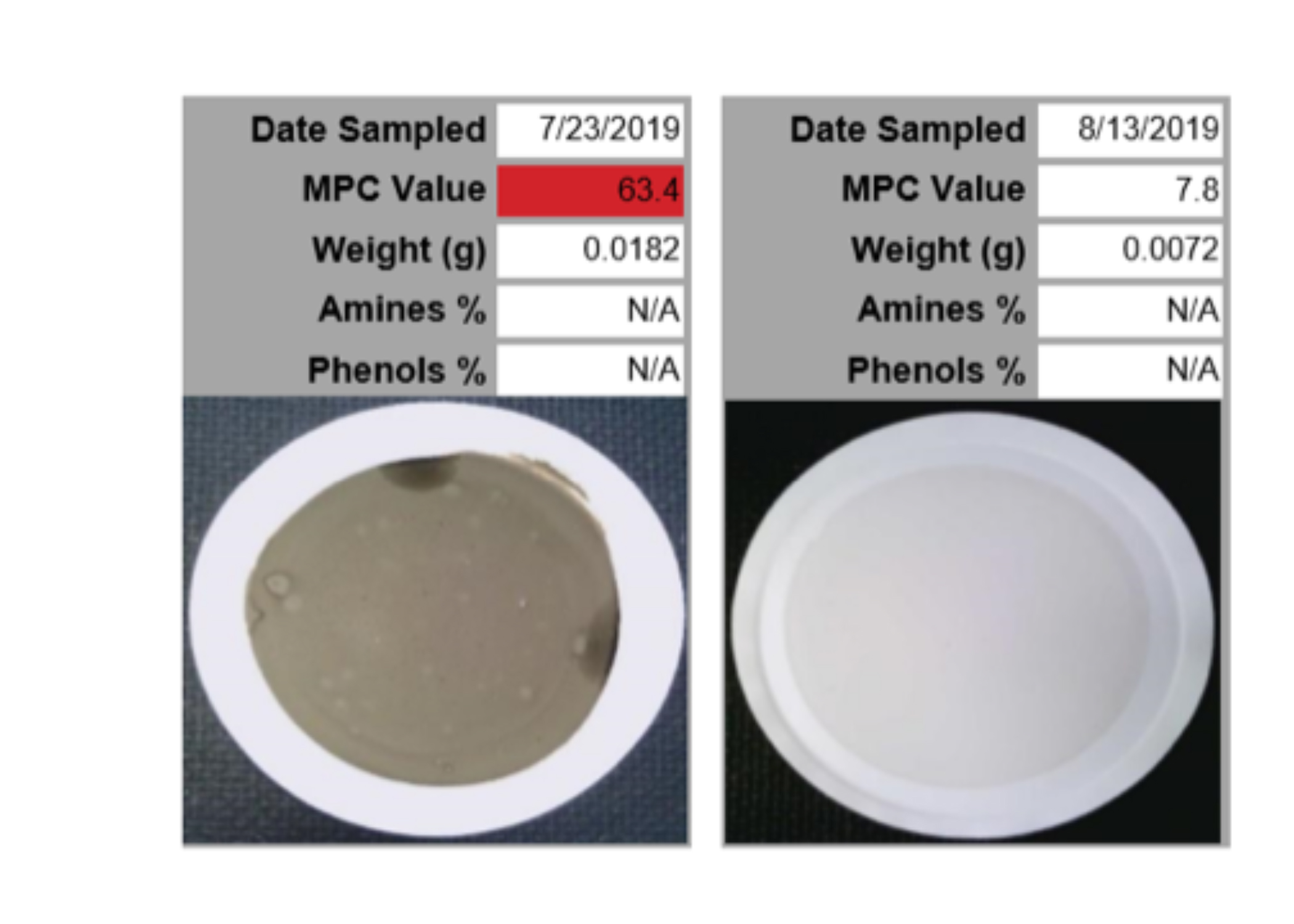 An operator who suspects a varnish problem – often identified by darkening of the oil – should take an oil sample and conduct a membrane patch colorimetry test. The MPC test provides a ranking on a scale of 0-100 to indicate the likelihood that varnish will form (see figure 4). An operator who finds a high MPC should deploy a varnish removal system in conjunction with a solvency agent to solubilize the varnish.

Wind turbines are challenging applications. The combination of remote locations, environmental conditions, and long timeframes between maintenance cycles mean that achieving optimum reliability cannot be taken for granted. While gearbox cleanliness has long been a focus, hydraulic systems are rightly garnering more attention. With over 50% of all hydraulic system issues tied to contamination, focusing on its control with desiccant breathers and offline filtration is a necessity for wind power to deliver clean and reliable energy long into the future. •