The Evolution of Automotive Testing

One of the main roles of automotive component test labs is to validate the structural integrity of automotive components and verify that they are manufactured to meet or exceed design specifications. It is a lot less expensive overall to make sure that a component part is sound before the component goes into a larger assembly and before physical testing of a completed vehicle. Structural testing of a ball joint, for example, is done to make sure that when it’s put into a vehicle it will last. In the past, specially designed test rigs were developed for each specimen type. Now, the trend is toward supplying test labs with flexible, reconfigurable test platforms that can be used with a wide range of automotive components.

One supplier of such test platforms is Innkeeper LLC of Livonia, Mich. Innkeeper’s business is providing configurable test systems that automotive component manufacturers can configure for testing various parts and subsystems. Sometimes a new test platform is developed from scratch, and other times the company will just replace the control system when the control system of an existing piece of test equipment is obsolete or not meeting the required specification while the rest of the test stand is serviceable.

Structural fatigue testing involves controlling the force that is applied to a specimen. The test system must apply a certain amount of stress, a certain number of times, and it must log data to verify the actual forces seen by the specimen. Tests can involve exercising the part with waveforms, like sine waves, square waves, triangle waves, etc., and sometimes the applied force is modulated to simulate real driving events. In these cases, the target forces may be obtained by instrumenting a vehicle and recording the forces that are delivered on the road. Sometimes, such as with testing of car seats, the tests must push and move parts of the specimen a specified distance in addition to applying a certain amount of force.

There’s typically a test plan for each part. The expected fatigue life of any automotive component is calculated during initial design. Once built, the calculations must be verified in the test lab. Fatigue testing applies a controlled force in a repetitive manner. Some specifications require that the wave shape and frequency of the repetitive force be closely controlled. “It is important for a good test controller to be flexible with regard to the type of control, wave shapes, and frequencies that can arise with different test specifications,” said Kevin Kretschmann, Innkeeper principal. “Besides fatigue testing, there are also ultimate strength-testing specifications that require a single application of force applied to a specimen. There are federal mandates, for example, that say car seat belts must be stressed to a minimal ultimate load without failing. A good control system needs to also be able to perform these types of multi-step programs that first move to a particular position and then apply a known force to a specimen.”

The Need for a Flexible Motion Controller

When larger forces are involved, hydraulics is the most repeatable and cost-effective means of applying test stresses. To control the hydraulics, a motion controller is needed that can perform closed-loop control of the force being applied in addition to controlling the position of the actuator. To ensure that sufficient control is maintained, the controller needs to be able to close the control loop between 1000 and 5000 times per second depending on the test.

To control the motion, Kretschmann selected controllers manufactured by Delta Computer Systems of Battle Ground, Wash. Depending on the number of simultaneous test profiles that the system must run, Innkeeper’s InnControl test platforms are outfitted with a Delta RMC151, which can control up to eight motion actuators, or an RMC75, which can control up to two actuators (Fig. 1). To support operator controls and data acquisition by a PC running LabVIEW, the Delta controllers connect to the PC via built-in Ethernet interfaces, giving direct access to motion parameters in the controllers. “With one RMC controller, I can manage up to 8 different tests on different machines, with complete isolation of different on/off controls, safety limits, and waveforms,” said Kretschmann. Fig. 2 shows the insides of Innkeeper’s control panel, with an RMC151 at left and the PC below it. 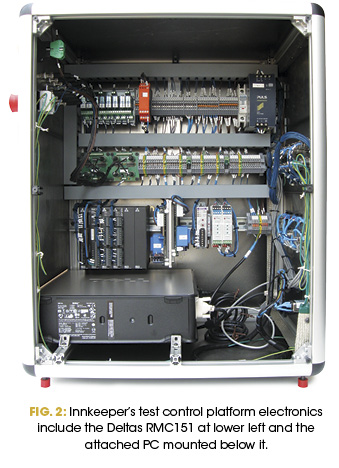 To make the test platform easy to use by test labs, Innkeeper’s flexible and configurable platform, InnControl, features a human interface (Fig. 2) implemented in LabVIEW that is user friendly and supports a high degree of functionality, allowing test engineers to plug together the components and begin testing. The user interface takes advantage of many of the standard force and position control features supported by the RMC controller, plus the standard functions can be supplemented with custom-built control functions implemented using the user program feature of Delta’s RMCTools software.

According to Kretschmann, “With the RMC’s custom user programs, I can switch over from a straightforward multi-axis test controller to providing any sort of custom performance we or our customers can imagine. Other test controllers can’t do this.” For example, Innkeeper used custom motion programs to implement the FMVSS 202 automotive seat tester, which involved exercising force and position control at defined intervals during the test profile to meet federal specifications. “It would have been very hard to do this with other controllers,” continued Kretschmann.

To operate custom testing functions, Innkeeper’s software supports the use of a “button box” (Fig. 4) whose functionality is customizable after the initial installation / integration is complete. In this particular case, the button box is used to initiate a series of custom sequences designed to remove air from a radiator prior to a pressure-controlled durability cycle. In other applications, a customized test sequence can be built by the test engineer at any time and tied to the front panel controls for instant access. 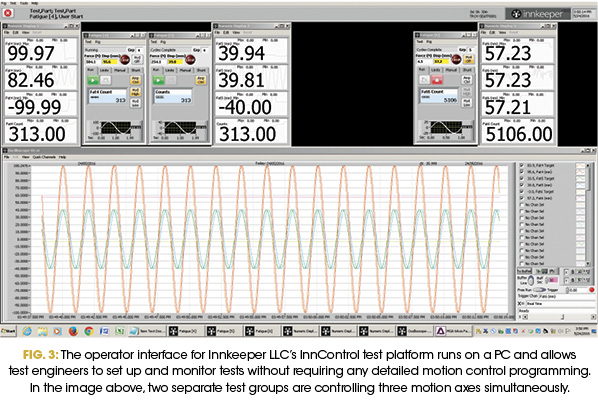 A block diagram that summarizes the functionality of the key computing and control elements is shown in Fig. 5. Motion commands and status information are available to the attached PC by accessing registers internal to the RMC. The InnControl front end monitors and can update this information at the rate of 1000 samples per second. “I can request a force-control sine wave of any particular amplitude, and the user can specify that if the force exceeds a particular setpoint, the machine should be shut down,” said Kretschmann. “I can assign any number of actuators to any test group. By doing this, multiple axes can be tied together to support a sophisticated testing profile.” 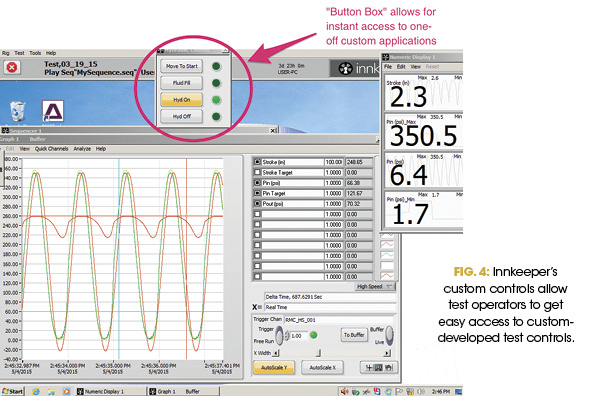 Integration, commissioning, and support are included with all Innkeeper systems, be they full machines or control retrofits. Support, which includes calibration, tuning, general operation, and troubleshooting, can be done by remote desktop support, in which case the response time is often measured in minutes, or by a scheduled visit from a field service engineer.

The control capability gives Innkeeper a flexible and configurable test lab control platform that can manage complex tests involving multiple motion axes, or it can operate several separate test platforms simultaneously. The control system can give new life to old test platforms by adding an improved operator interface and a lot more flexibility for advanced performance. 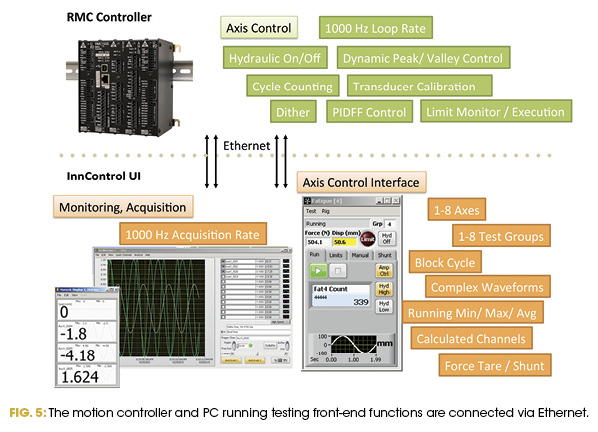 InnControl does not require the end user to be proficient with RMCTools software, but will allow advanced users to build and execute custom programs within the RMC controller if desired. Force, pressure, and displacement calibration can be done from the Innkeeper control panel, and the system gives users the ability to access historical test information, which helps with the system running tests autonomously. “Many of our standard features aren’t supported by test platforms costing tens of thousands of dollars or more,” said Kretschmann, “and delivering maximum flexibility and functionality per dollar spent on equipment is extremely important in the automotive market.”