Maintenance personnel who work on heavy equipment are outfitted with hardhats, steel-toed boots, gloves, and safety glasses—all precautionary measures against accidents. But what about fluid power system safety?

Mining, oil and gas, construction, and agriculture are among a multitude of industries that use equipment outfitted with fluid power systems. These systems use hydraulic fluid, under very high pressure, to actuate various components to produce work. A vast amount of energy is contained within such systems, and the damage from the unexpected release of such energy cannot be over-emphasized.

High-pressure fluid injection injuries occur when hydraulic fluid is accidentally released from a fluid power system and penetrates the flesh of a worker. These types of injuries are usually devastating—resulting in the loss of fingers, hands, eyes, arms…and may even cause death.

It is critical that companies follow safety procedures to prevent these injuries, but even with these procedures in place, accidents can still happen. In the event of a fluid injection injury, FluidSafe™ is a unique additive that fluoresces under blue light to help confirm fluid injection and the degree of penetration under the skin. It is used in conjunction with the SafetyBlu™ SB-450 blue light inspection kit from Spectroline®, which can help prevent fluid injection injuries to mine workers and reduce fluid consumption by 5-7% annually. 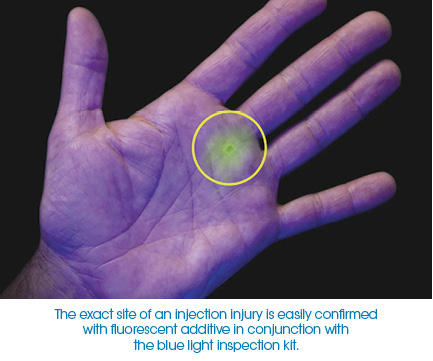 It Could Have Been Worse

A contractor who worked at a coal mine in Queensland, Australia was replacing hydraulic hoses on a fluid power system associated with a roof support. As per procedure, the operations people isolated the two affected circuits and bled off the pressure. The replacement of the first hose took place without a hitch. The contractor was told that the second circuit was also depressurized, and as a result, he started loosening the fitting. The fitting suddenly separated, and he was up against 6500 psi of hydraulic fluid and an out-of-control hose. High-pressure hydraulic fluid penetrated the contractor’s hand just below the palm. The thrashing hose broke his ulna. 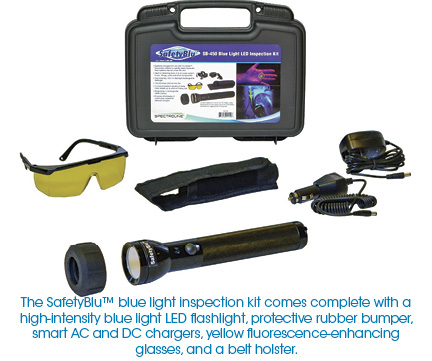 As it turned out, a check valve was present in the line, but out of view. And the small bleed valve had been replaced by a plug. The operations people thought the second hose had been depressurized, but it had not been done.

The contractor was immediately transported to the surface of the mine. Fortunately, the company used the FluidSafe™ additive, and with the use of a SafetyBlu™ blue light inspection kit, onsite first-aid staff was able to confirm the injection of hydraulic fluid. He was transported to a local hospital, along with the blue light kit that included instructions for the emergency room physician. The wound boundaries were easily observable with the blue light. This allowed doctors to carry out surgery on the contractor’s hand in a manner that minimized tissue loss.

While six months of recovery and rehabilitation followed the accident, the contractor regained 95% functionality in his hand. 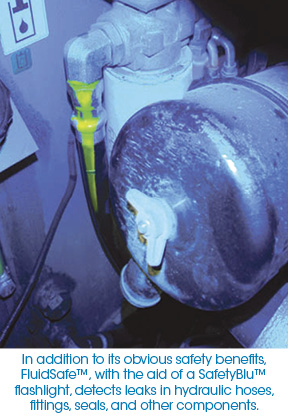 The Spectroline® SafetyBlu™ blue light inspection kit also detects leaks in hydraulic hoses, fittings, seals, and other components before they have degenerated to the point where their safety and integrity have been compromised. Undetected leaks result in costly fluid replacement, equipment breakdown, lost production volume, liabilities associated with environmental contamination, and inevitably increase the risk of injection injuries.

The kit features a portable, high-intensity blue light (450 nm) LED flashlight. Its rugged, anodized aluminum body reduces corrosion and stands up to years of heavy use. Powered by a rechargeable NiMH battery, it provides 90 minutes of continuous inspection between charges. The LED has a 100,000-hour service life. The kit includes smart AC and DC chargers, yellow fluorescence-enhancing glasses, and a belt holster. All components are packed in a padded carrying case.