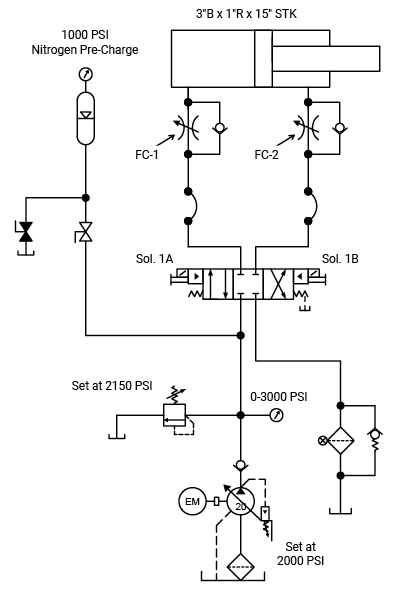 A customer of ours bought a machine that had a damaged cylinder that needed to be replaced. The rod was bent, and they ordered a replacement cylinder with a larger diameter rod thinking it would eliminate the original problem.

The machine was put into production and worked well with one exception. Each time they stopped the cycle for more than 15 seconds, the cylinder started to drift out causing a potential safety problem. The cylinder supplier shipped them a replacement cylinder, but the problem persisted. The circuit was confirmed to be correct and matched the machine hydraulic set-up.

Any idea what could be causing the problem?

Drifting single rod cylinders with a blocked center spool is not an uncommon problem. Many people don’t realize that when the “P” port on sliding spool directional valves is blocked, pressure causes oil to leak into the “A” and “B” ports. This leakage normally would build up to ½ of the system pressure present at the “P” port. Also, blocked “A” and “B” ports will leak to the “T” port if under pressure. Cylinders with large rods have a larger extending force, causing the rod side pressure to increase, which causes more leakage to the “T” port resulting in cylinders to drift out. Changing the spools center position so the cap end would be open to the “T” port could cause the cylinder to drift in the opposite direction.

One thought on “Changing Cylinder Size Causes A Drifting Problem”