A processing plant in Pakistan had a walking-beam system that would move coils of finished product to shipping for processing. Several “pot-belly” cylinders would lift long, horizontal rails with “V” notches cut in the top surface. A large shaft was inserted through the middle hole of the coils and extended out past the coil sides, and would nest in the notched rail, lifting the coils up and above fixed “Y”-shaped supports. Once lifted, two other cylinders would move the rails horizontally, approximately 8 feet. Then the “pot-belly” cylinders would retract, lowering the coil shafts into the fixed supports. The lifting rail was retracted 8 feet, lifted and horizontally advanced the coil 8 more feet towards shipping.

One large, pilot-operated directional control valve would move 8 cylinders. After an annual shut down, where the long hoses and directional valve were replaced, the cylinders started drifting up, contacting and lifting the horizontal rails, which caused a problem. The employees checked the tank line check valve, and it was working fine. They suspected the new directional valves since they had to switch the solenoid wiring to get the correct action. 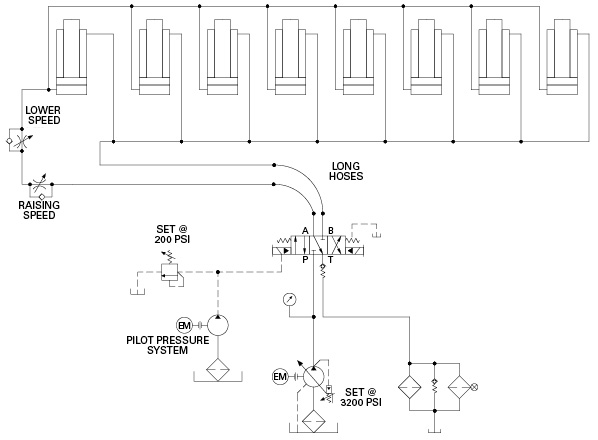 Any idea what the problem is?

The lifting cylinders were drifting up, so this ruled out bypassing pistons. It turned out the employees had switched the main cylinder feed hoses. This explained why the solenoid wires had to be switched. In addition, with a spool-type valve that has a blocked “P” port, leakage from the “P” port to both “A” and “B” ports exist, causing a pressure increase in any blocked cylinder ports. The pressure build up usually is close to half of the system pressure, which was enough to cause the cylinders to drift.