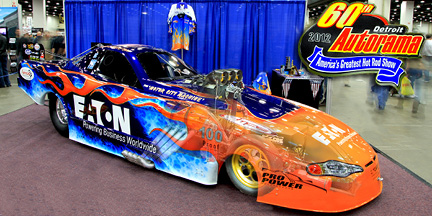 “With one of the only pro-level cars with a torque-converter-driven transmission, the Top Alcohol Funny Car was considered an underdog in 2014, yet we smashed through the ranks to achieve a runner-up position in the 60th-annual Chevrolet Performance U.S. Nationals Event,” said Todd Robertson, driver and owner, Pro Power Motorsports. “Eaton’s engineering experts have continuously helped our team understand the pressures, flows, temperatures, and technologies required to make a torque-converter-driven transmission competitive at this level of racing.”

Since the team was founded in 2001, Pro Power Motorsports has relied on the Power of One Eaton – a combination of solutions from the company’s hydraulic, electrical, and vehicle groups – to build a competitive car. Eaton components on the car include the following:

Hydraulics Group – Eaton supplied 100% of hoses and fittings used on the car, including Aeroquip® StartLite® hoses, which are flexible, high-temperature hoses that are also flame retardant to improve driver safety in the event of a fire or crash, and Synflex® nylon tubing, which is manufactured from raw materials instead of reground products and prevents air pockets from forming. Even in the tough conditions on the racetrack, the team experienced no hose failures in 2014. The group also supplied quick-disconnect valves, which make changing the moving components between runs faster and easier.

Electrical Group – Eaton supplied switches, toggles, and pushbuttons that regulate electricity in the car and help eliminate “ghost problems”—electrical issues where systems are not working or data is not being collected. With Eaton’s switches, 100% of Pro Power Motorsports’ ghost problems have been solved.

Vehicle Group – Engineers worked with the team to build a custom supercharger that could achieve the massive 3,000 horsepower (hp) required for the racecar to run up to 250 miles per hour. The group also provided the engine lifters. 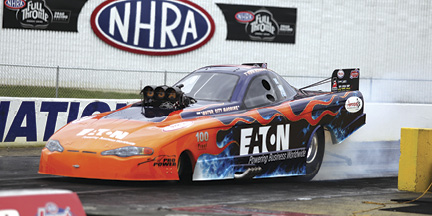 “The success of the Pro Power Motorsports team has been exciting to see, and we look forward to the challenges and successes of the 2015 season,” said Mike Rasnick, business development manager, hydraulics, and Eaton’s Pro Power Motorsports team representative. “Our products and engineering inputs have helped transform the team from weekenders to professionals, while the team is continuing to help spread the word about Eaton’s performance products in and out of the racing world.”

The Pro Power Motorsports’ 2015 race season will begin with the NHRA Lucas Oil Drag Racing Series regional race, May 1-3, at Lucas Oil Raceway in Indianapolis, Ind. The team will participate in regional and national events throughout the year, culminating with the 61st-annual Chevrolet Performance U.S. Nationals, September 2-7, also at Lucas Oil Raceway.