So how does eliminating the hydraulic system make this machine more sustainable? After all, hydraulic systems do not burn fuel, so they don’t produce large amounts of exhaust gases. While they can emit small quantities of vapors into the atmosphere from their reservoir breather, these emissions are easily captured and returned to the hydraulic reservoir.

So if the impetus to replace hydraulic drives with electric ones is not focused on emissions, the perceived disadvantages of hydraulics—especially leakage—must be the culprit. Perceptions abound that hydraulic systems leak and lead to environmental damage. This perception is so widely accepted it has given birth to an entire market: environmentally friendly hydraulic fluids, the claim being that these fluids minimize environmental damage if a spill occurs.

A simpler solution is an old one that has been debated more than 70 years: training. Proper design, installation, and maintenance can prevent most leaks in the first place. Every sector that touches hydraulic equipment must follow successful best practices, including those that:

• design hydraulic systems and specify components for them,

• install and repair components and systems, and

If personnel fail at any of these jobs, the hydraulic system may leak. Therefore, training to make workers aware of what causes leaks and how to prevent them is essential to achieving leak-free hydraulics.

Hydraulic systems are also perceived as somewhat of a black box. When something malfunctions, a user calls in trained mechanics and technicians to troubleshoot and make repairs. It’s the same as when malfunctions occur in sophisticated controls and electromechanical systems. Hydraulic systems are no more mysterious than other drive systems requiring specialized knowledge and experience. It’s just easier to find experts well-versed in electrical systems than it is finding competent experts in hydraulics.

The T7X may be the first all-electric skid steer loader to hit the market, but Volvo AB introduced an all-electric mini-excavator back in 2017. The prototype, called the EX02, used electric motor drives and electromechanical actuators for its power functions, so it contained no hydraulics.

However, a visit to Volvo’s website provides no new information since the introduction of the EX02. In fact, all of Volvo’s “all-electric” machines entering the construction market since then are actually hydraulic hybrids – they have a hydraulic system that is driven by a variable-speed electric motor.

I received no response from Volvo when I inquired into the status of the EX02, so perhaps developers discovered that the electric dives did not match the performance, durability, and longevity of hydraulics. In fact, Doosan, Volvo, Caterpillar, Komatsu, JCB, Case CE, and Wacker Neuson have also introduced mini-excavators, and they’re all hydraulic hybrids.

As with other all-electric machines introduced to the construction market, Bobcat’s T7X skid-steer loader uses variable-speed electric motors in its ground drive. This is not surprising; electric wheel drives have been used for decades. Large earthmoving trucks make wide use of electric propulsion drives, as do railroad locomotives. Traditionally, they are powered by a diesel engine that powers a large generator, which supplies power to the wheels.

In construction equipment, the trend in excavators is to replace the hydraulic motor in the machine’s swing drive with an electric motor. Electric motors exhibit high starting torque, which provides rapid rotational acceleration. This high starting torque is also beneficial for wheel and track drives, especially when coupled with a planetary gear drive on the output of the motor.

Profile of the T7X

“First, a hydraulic system has a lot of connections and components,” Odegaard said. “Every connection in a system, presents an opportunity for a leak. Eliminating hydraulics means eliminating the risk of leaks, and therefore, eliminating the potential for downtime.

“Second, going to an all-electric platform is a lot more efficient than a battery pack running a hydraulic system. This gives us longer operating times without the need for a larger battery, thereby increasing productivity and efficiency over the life of the machine.”

Odegaard’s first claim raises the frequent criticism of hydraulic leaks. Leakage occurs when operators, mechanics, and others think of it as inherent to hydraulic systems. But as noted above, employing properly trained workers who follow best practices drastically reduces the frequency and severity of leaks

Odegaard’s second point is related to a specific system design. Individual system designs, such as electrical system voltage and battery configuration, vary widely among OEMs of electric loaders and mini-excavators. Just as these variables can affect efficiency, so can the OEM’s design of the hydraulic system that drives an electric motor. A hydraulic system using a variable-displacement piston pump, for example, substantially improves efficiency and performance over that of a system using, say, a gear pump.

Odegaard added that the T7X relies on a 460-V electrical system. “This voltage yields the efficiency we were looking for in terms of overall design,” he said in the Bobcat press release.

A construction-grade, 62 kW lithium-ion battery powers the loader’s track system and all workgroup functions. The full charge of the battery can support daily work operations for up to four hours of continuous run time and a normal, full day of operation during intermittent use.

Bobcat officials compare performance of the T7X to its conventional T76 counterpart. The T7X has an operating weight of 12,187 pounds, which is almost 20% heavier than the 10,250-pound T76. Odegaard added that the T7X loader is “a premium configuration and is priced at approximately three times that of a nicely equipped T76 loader.” However, the T7X loader will cost nearly 90% less to operate than a T76 loader when comparing all input costs for fuel versus electricity and routine maintenance items. Additionally, scheduled downtime is considerably less because there are almost no planned maintenance items for the T7X.

Although the T7X is designed for sustainability, it is also a smart machine featuring software connectivity via two-way telematics communications. Doosan Bobcat collaborated with Moog Inc., a worldwide developer of motion control components and systems, to speed the pace of R&D for electronic-control capabilities of the T7X.  Moog designed and provided a platform that provides data about equipment performance and lets the operator change machine preferences, tune the performance to certain job situations, and upgrade product features. This includes variable drive speed at full torque and other features not possible with a diesel-hydraulic machine.

Moog designed an efficient system using distributed control to send power only when and where it is required, such as for lifting a load or moving side to side, and thus it wastes little to no energy. The power management system senses when loads increase and automatically reduces power when it’s not needed. All these features combine to conserve energy to extend the machine’s run time.

“In general,” Daniel Foster, Moog’s director of technology, growth and innovation, said in an email exchange, “our approach is that simulation and analysis of the total system – including all mass and static loads as well as the stiffness of the entire system – is required when considering the design of actuators, mounts, and associated control system to manage the shock loads. Like the robust system approach in hydraulics, electromechanical systems (when designed properly) handle high impulse and shock loads. However, considerations for controls and timing of events are different from those used for hydraulics.”

Moog’s system software learns to optimize movements and operations as the T7X works. Moog officials explained that smoothing out the peak periods of energy use can boost run time by more than 25%.

Perhaps the most critical components of the T7X are the electromechanical linear actuators designed by Moog, which prefers the term “electric cylinders.” The T7X uses a pair of electric cylinders for the bucket tilt function and a second pair for bucket lift. 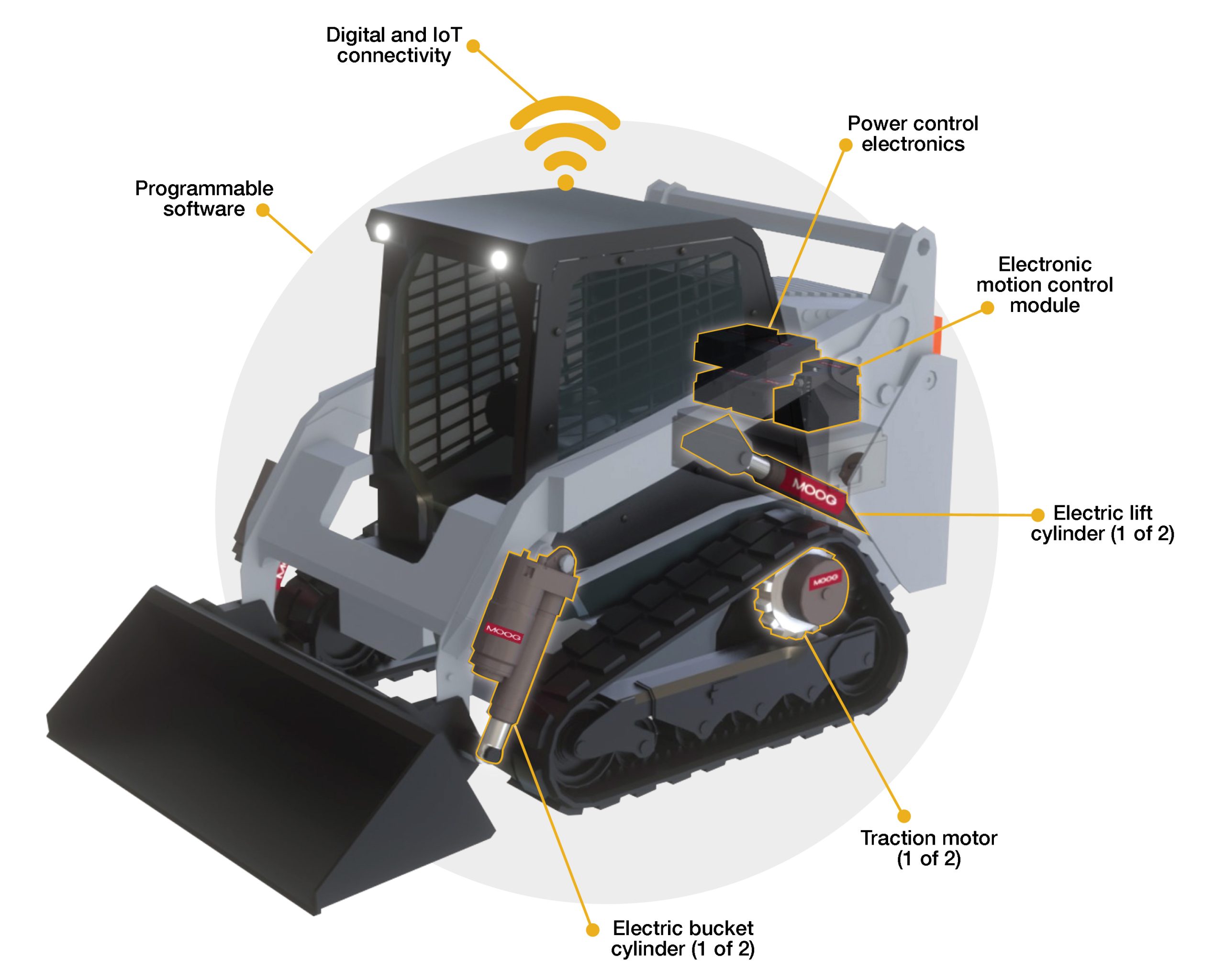 “We design and manufacture our own screws and actuators,” Foster said, “so we have developed specific tools to analyze and validate the designs. Moog ballnut and return designs are specifically designed so loss of balls from a circuit is not an issue. Sizing for operational loads, failure modes, and associated contact stresses is the key for meeting the design life.”

For those well-versed in hydraulics, the big question is whether these electric cylinders can withstand the regular use and abuse meted out by operators. After all, loaders are often used for more than just scooping and dumping loose material; they are often used for scraping asphalt and other materials from concrete, digging into rocky soil, and working large rocks or chunks of concrete loose so they can be removed.

However, Moog’s Foster considers electromechanical systems to be more robust to internal contamination than hydraulics. “Sealing is really the key for the highest reliability and life,” he said. “In the case of seal failure and resulting internal contamination, if the actuator or gearbox should become damaged and suffer degraded performance, efficiency will also be reduced. Because efficiency can be monitored over the life of the actuator’s operational life, it can be changed out as a ‘line-replaceable item’ that does not impact other parts of system.”

System-wide contamination and damage is not a failure mode of electromechanical systems, he said. Changing out a line-replaceable item does not involve draining, flushing, refilling, and bleeding a hydraulic system.

Another concern, but to a lesser degree, is localized heat generation. Electric motors can generate substantial heat when subjected to frequent starts, stops, and reversals. Foster said that the main traction and propulsion motors servodrives, power management modules, and often the batteries are cooled using a propylene-glycol solution. The cooling system is centralized with low-pressure cooling lines.

Even if the Bobcat T7X proves to be a rousing success, it still won’t spell the end of hydraulics in mobile equipment. The high price tag will limit the number of units sold, which will hold back price reductions that would otherwise result from high-volume sales.

The batteries themselves also pose a limitation. Downtime that accompanies machines being recharged limits their use for multiple shifts per day until a quick and easy method exists to swap depleted batteries for freshly charged ones.

Another limitation is scaling. The Bobcat T7Z is a small machine in the world of construction equipment. Even if it’s possible, applying its technology to larger machines is probably cost prohibitive for the foreseeable future.

So concern over hydraulics being eliminated from off-highway equipment is premature at this time. But who knows? It might be something that could affect your great grandchildren – when they become old. 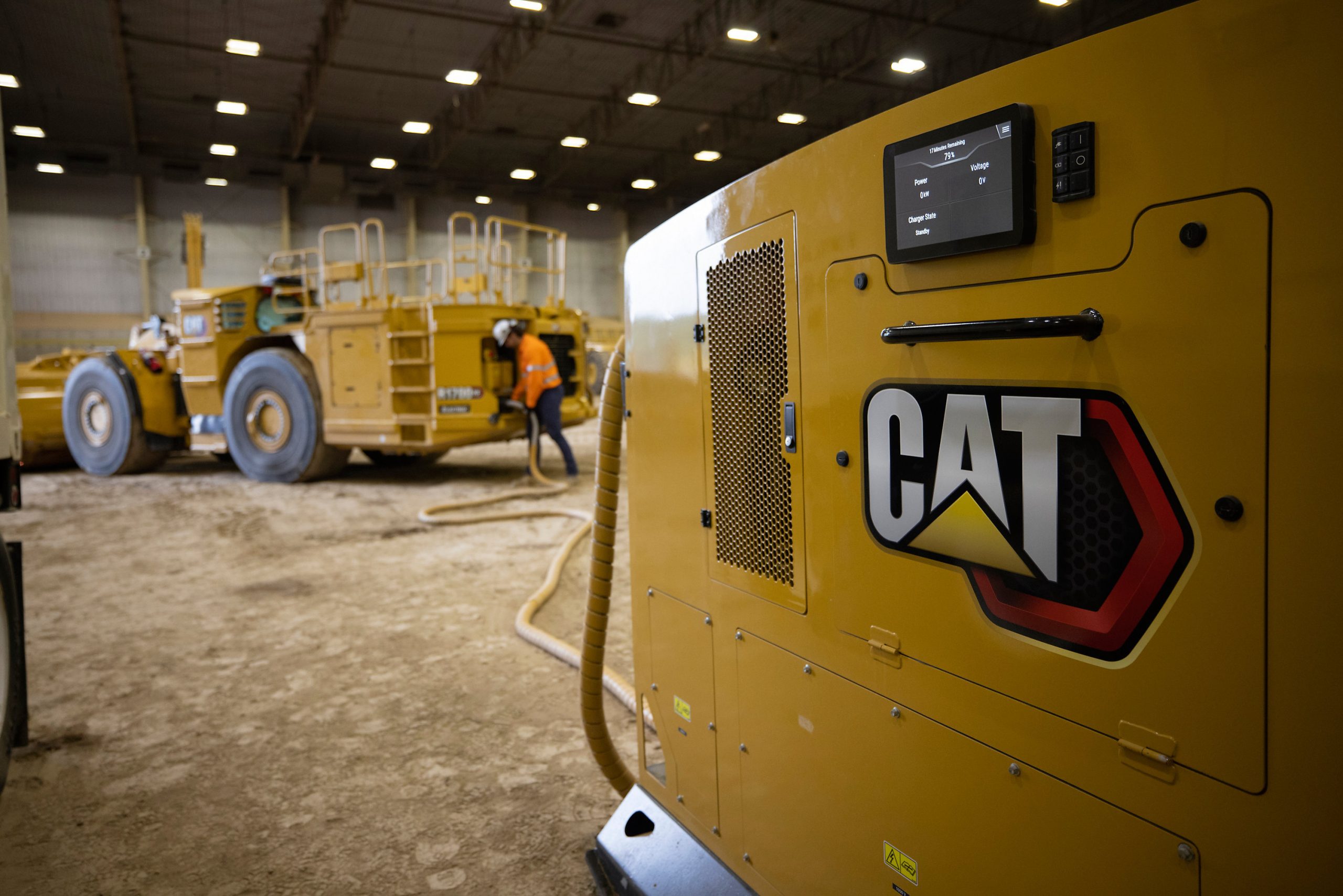 This charging station is used on jobsites to provide quick recharging of electric equipment at the end of a work cycle. Source: www.cat.com.

Then lithium-ion batteries entered the market. They revolutionized the electric vehicle to the point where today we seriously discuss how it may someday replace the fossil-fueled vehicle. Unknown, though, is whether electric cars are practical for long-distance travel. Even with all the advancements in range, an electric vehicle still can’t carry six or more people and their luggage and drive 600 miles or more in a day – especially if you need to run heat or air conditioning.

The main obstacle to overcome is how to quickly recharge or exchange a spent battery and resume a trip in about the same time it would take to refuel. The problem doesn’t seem to be the vehicle, but rather the infrastructure, i.e., the recharging stations, needed to restore a spent battery.

Many commercial vehicles – especially those used at construction sites – don’t have this problem. They use their energy for digging, lifting, crushing, pushing, and a host of other tasks that don’t involve traveling long distances. This means a construction project could keep a transportable recharging station on site and schedule vehicles for recharging throughout the workday.

A similar advantage exists with vehicles that run fixed routes, such as garbage trucks and buses. As long as they can run their route on a single charge, they don’t need to swap or recharge batteries until the end of a shift.