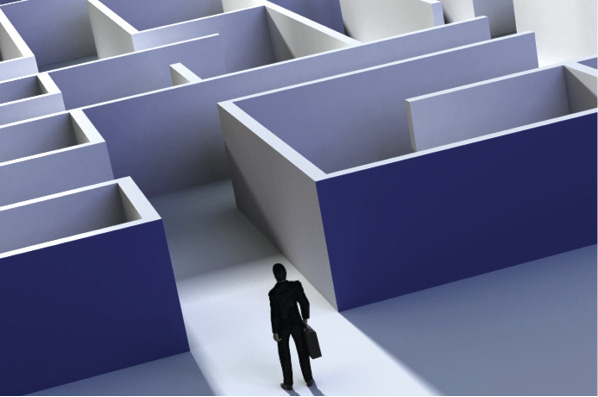 In October 1991, at a meeting of the Buffett Group, Warren Buffett’s inner circle, Bill Gates was asked what he thought of Kodak as a company.

As Buffett’s biographer explains, “Nobody else in the Buffett Group knew that digital technology would make film cameras toast. In 1991, even Kodak didn’t know that it was toast.”1

In January 2004, Kodak stopped making most film cameras for developed markets and in June 2009 ceased production of their famous Kodachrome film. Gates was indeed prescient in this.

As Andy Grove, the founder of Intel is famous for saying, “Only the paranoid survive.” Perhaps Kodak wasn’t paranoid enough to see what was coming.

It is in this context that those of us involved in the fluid power industry probably should be concerned about the threat posed by electromechanical alternatives in traditional, industrial fluid power applications.

There are a lot of applications in which hydraulics and pneumatics have a monopoly on. But they’re not the ones we need to worry about. If it’s a dynamic, growth industry we want, then it’s the applications for which there is viable competition that must be defended.

This is especially true when biases such as “getting rid of the oil” (and the leaks that usually go with it) and eliminating the need for in-house hydraulics expertise (which can be hard to find and retain) influence end-users’ buying decisions.

That said, oil (and air) leaks, and finding and retaining relevant expertise do impact Life of Machine Ownership Cost (LOMOC). And it’s LOMOC that should be the definitive guide for the end user when choosing between competing motion control solutions.

The main components of LOMOC are

In industrial applications, fluid power has an inherent disadvantage with respect to energy costs (efficiency) and reliability—this is particularly the case with hydraulics.

Let’s consider the efficiency issue first. In industrial applications where mains electricity is the energy source, both hydraulics and pneumatics have to pay a conversion penalty. This is best illustrated by comparing an electro-mechanical, linear actuator to a hydraulic cylinder.

The block diagrams shown in Fig. 1 depict the components involved in the power transmission process from mains electricity in, to force/motion out, and their typical efficiencies. The efficiency values shown can vary, but the main point is there are more components required in the fluid power solution and therefore more losses. 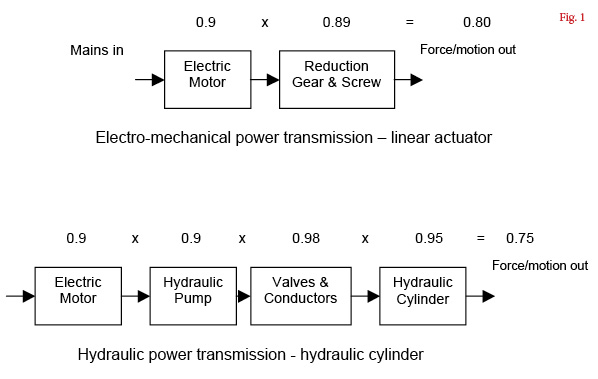 So the electro-mechanical solution is simpler, more energy-efficient and in applications where the system’s operating parameters don’t exceed the current capabilities of linear actuators, you have to admit, it’s very appealing. And that’s without considering maintenance and reliability. There’s no oil leaks to worry about, no filters to change, no oil samples to take, and no blown hoses to replace.

The reality is, compared with most electro-mechanical devices, even a simple hydraulic system is a lot more complex maintenance-wise and therefore more difficult to effectively maintain. Furthermore, the achievement of optimal maintenance and reliability outcomes is all too often compromised at the outset through bad or cheap design.

Oil quality, tank size, filtration, installed cooling capacity, conductor size, and connector type are just a few of the corners that are all too easy to cut at the design stage. And while the end-user’s initial capital outlay may be lower as a result, they will likely pay handsomely for this upfront discount over the life of the machine.

Even a relatively well designed (from a maintenance and reliability perspective) hydraulic machine will suffer from reliability issues if left to its own devices over time. This means optimal maintenance and reliability outcomes require a certain level of knowledge (and intervention) on the part of the end user. Unfortunately, this knowledge is often lacking—not only on the part of the end user, but the equipment manufacturer as well.

The result can be a hydraulic system that, perhaps quite rightly, is seen as unreliable, messy, and expensive to operate. When an end user has this type of experience, it’s not surprising that an aversion to hydraulics gets etched into their corporate memory.

In this context, every fluid power system installed is an ambassador for the technology. If it turns out to be a lemon, it reflects badly on the entire industry, and lingering biases in the mind of the end-user can make a fluid power solution a harder or even impossible sell in the future.

So as an industry, what are our options? There are two that come to mind:

If we choose the proactive option, #2, the first step is to understand and acknowledge fluid power’s weaknesses vis a vis competing technologies; that in many industrial applications we start behind the eight ball when it comes to energy efficiency, and hydraulic solutions in particular are inherently disadvantaged by their real (and perceived) maintenance burden.

Firstly, because the majority of fluid power education available today focuses on how it works (or how it’s supposed to work) rather than how and why it fails. And secondly, designing for maximum reliability and minimum, initial capital outlay are incongruent. A change in industry culture from designing to price, to designing for optimum reliability and therefore minimum LOMOC, will be difficult, if not impossible, in a competitive marketplace driven by a race to the bottom mentality—unless the end user too becomes better educated and therefore more sophisticated in their equipment purchasing decisions.

In other words, the end user must be educated to think in terms of LOMOC for this shift towards the design and manufacture of better performing, and therefore more competitive, fluid power systems to occur.

If as an industry we choose to take up this challenge, it will be no cake walk, that’s for sure. Inaction though, by default, leaves open a “Kodak” scenario: it makes our industry increasingly vulnerable to tectonic shifts in technology.

1The Snowball: Warren Buffett and the Business of Life by Alice Schroeder, p. 524