Freedom of the Press: Closed Loop Control for Servo Valves

Advanced Foundry Specialists traces its roots back nearly 30 years, and it shares the same mission as its sister organization, Advanced Tooling Specialists: to provide “the most competitive, high-quality, and innovative finishing room automation solutions available.” AFS services the foundry industry, and its trim presses process castings across a host of applications, many of which can prove vitally important.

AFS vice president and general manager Brian Luebke said in an interview that some of the top automotive manufacturers in the world use customized AFS hydraulic trim presses. These presses help finish parts as they emerge from molding. There is no room for error in the trim process, as customer quality controls are understandably stringent. Faulty parts – cracked brake calipers, for example – could cost lives. The company made a significant leap forward in its hydraulic trim press accuracy and speed when it adopted Delta Computer Systems’ motion controller solutions. 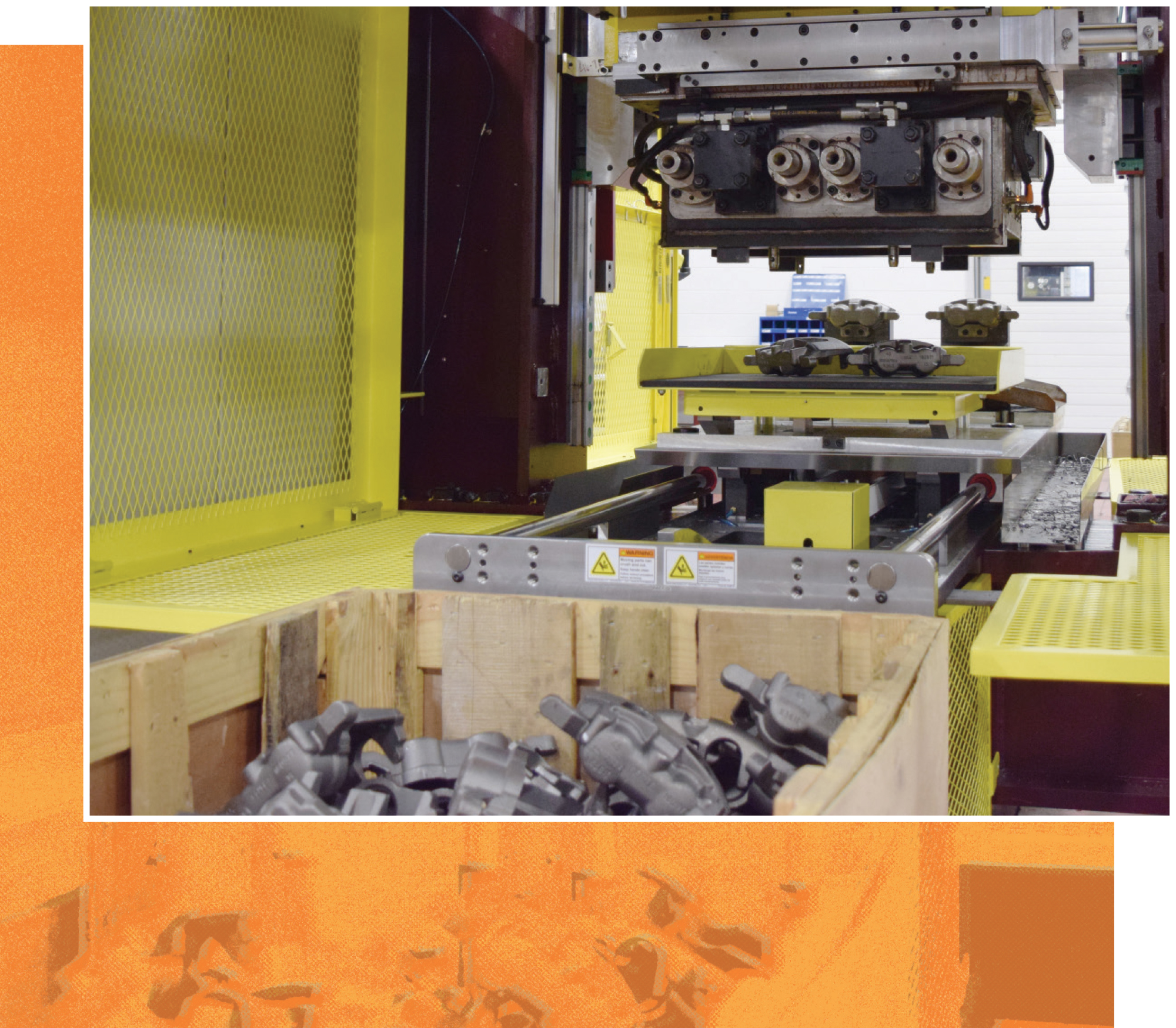 The working area of the trim press, with some finished brake caliper castings in the foreground.

In vertical molding, the upper and lower molds close and join together. Where they meet, a line of unwanted material called flash is left, and it needs to be precisely removed. This removal can be done either with grinding equipment, which is relatively slow and laborious, or a trim press, which is faster and more consistent. In high-volume settings, the latter is obviously preferable. However, high-volume output demands running the presses at the fastest feasible speeds, and this carries some risk. If operators don’t control the trim press motion accurately, a crash scenario could result, potentially damaging the tooling equipment.

Years ago, AFS controlled the motion of its trim presses with a programmable logic controller. However, because of the inherent limitations of PLC programmability, operators couldn’t accurately stop the presses while running at desired operating speeds. Effectively, they had to choose between production speed and press accuracy. AFS had to deal with these limitations for years in its own product lines; it’s what drove the company to look for better technologies for its high-volume trim presses.

In those earlier times, AFS experimented with digital motion controller brands and varying approaches, such as retrofitting advanced sensors onto older PLC-based presses. These were laser-based systems for detecting load-placement anomalies, but they were inordinately expensive for the task. Finally, AFS learned about Delta motion controllers. As soon as AFS understood the difference Delta RMCs could make to response times in their hydraulic press application, it became an immediate differentiator for the company’s product line.

Migrating to Delta hydraulic motion controllers yielded another key advantage: mitigating the dangers of misloads. Imagine loading a part that was almost a perfect cylinder for trimming. To an inexperienced eye, or perhaps an operator experiencing fatigue or distraction, it would be easy to load a part in the wrong orientation; e.g., with a slightly flatted feature positioned at 90° in the trim press rather than the required 270°. Misloading is likely to damage the part and may even lead to damage of the tooling or press.

AFS equips the system with the Delta motion controller and high-resolution linear position transducers to know at every millisecond where the tooling is and where it is going. If contact isn’t made at exactly the right time, the system detects the problem and initiates a stop before any damage occurs. To meet the production requirements, AFS runs its trim presses at a rapid speed during the approach and a slower trimming speed as the work is being done. At this transition point, Delta’s RMCTools software platform switches to tuning parameters on-the-fly, accounting for the varying speed and load conditions.

“The trick is to go as fast as possible for as long as possible,” Luebke said in the interview, “then shift to that lower speed as quickly as possible, all while maintaining precise location control. And during that transition, that’s where we’re making part detection happen. A lot of things are happening at the same time, and at these speeds, the Delta RMC gives us a lot more ability to control and optimize the process.” 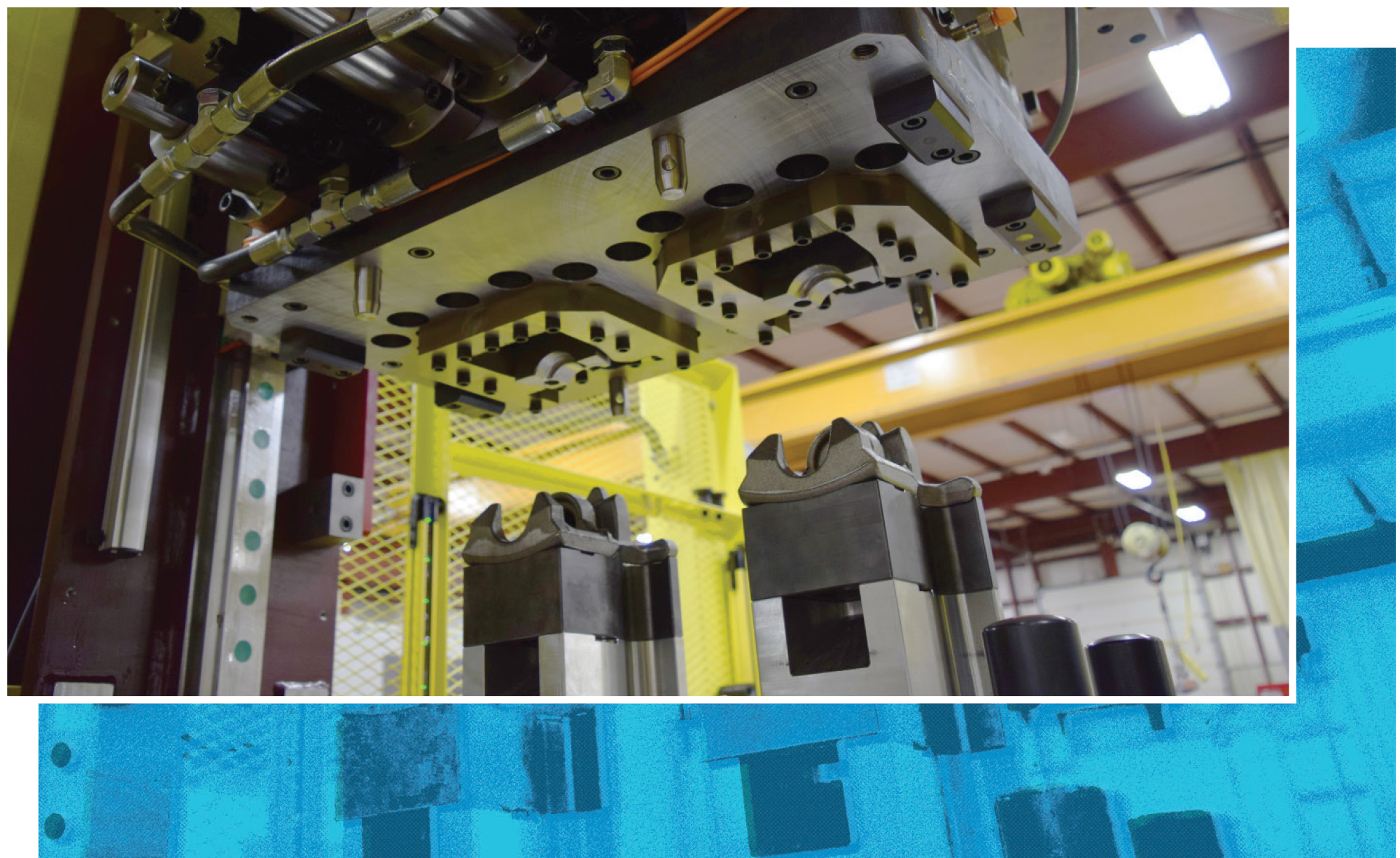 A close-up of the tooling, with the horizontal trimming cylinders visible to the left.

Depending on the job specifics, Luebke estimated that adopting Delta motion controllers has improved press cycle times by 10% to 20%.

However, Luebke emphasized that while press performance optimizations are impressive, the product quality improvements enabled by Delta RMC precision are critical. Any process fault could lead to repeated imperfections in a sequence of parts, and that, in turn, could lead to costly recalls. This sort of preemptive quality control provided by Delta’s motion control makes considerable differences to AFS’s customer base, and it means significantly lower return rates on the final parts.

“The biggest benefit to us in having this layer of protection,” Luebke said, “is that automakers, foundries – our customers – had steered away from trimming, even though it provided more consistent finished parts. They steered away because of the risk involved in those misloads and what a misload would mean to the RMA rate. But with Delta’s technology, it turned trimming from being a nonstarter into a viable option.”

According to Luebke, Delta’s software and software support made all the difference in its RMC implementation and design success. He notes that the AFS team is not made up of programmers and software engineers. Implementation of Delta’s RMCTools was a matter of pull-down menus and graphics-driven displays, bringing complex hydraulic motion programming within the team’s scope.

Luebke adds that AFS’s early years with Delta and RMCTools were much like learning a software package from Adobe or Microsoft. Getting up and running was straightforward and only a matter of minutes or, at the most, a few hours. However, that first step in expertise only encompassed a minimal amount of the software’s true functionality. AFS had “no idea” about the application’s true breadth for several years.

To date, AFS has installed over 30 customized trim presses with Delta motion controllers, and customers are happy with the results. Ultimately, full-featured hydraulic press motion control has given AFS a way to enable its clients with faster production, a cost-effective solution, and greater safety for end users around the world.