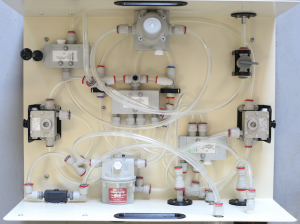 Moved by the impact coronavirus has had on the medical community, a semiretired inventor from Arizona had an audacious idea: to create an open-source ventilator made from off-the-shelf industrial parts. Luther Johnson’s thinking was that, with the sudden shortage of ventilators, his project could act as a fast stopgap that medical facilities could make themselves. Johnson dubbed the project MakerVent and set about sourcing parts for the first build.

Johnson based his design on a fully pneumatic, electricity-free ventilator dating from the 1970s. For the important job of controlling the flow of oxygen through his ventilator, he used two kinds of gas pressure regulators from Bellofram Precision Controls, a division of Marsh Bellofram.

The first is Bellofram’s Type 60 preset general-purpose air regulator, which receives the initial oxygen input, typically provided from a hospital’s wall unit or a tank, and reduces the pressure to 30 psi. The second Bellofram piece is the Type 70 high-flow pressure regulator. It is located at the opposite end of the process, just before the oxygen reaches the patient, and further regulates the air flow to less than 1 psi, a safe pressure for human lungs.

Johnson reviewed all parts used in the device for biocompatibility, and each was also subjected to a special oxygen cleaning protocol. This process removes dust, oils, and residue native to industrial manufacturing and renders the parts safe for human use. In a testament to the effectiveness of these protocols, in August the first production unit of the MakerVent ventilator passed ISO 18562 compliance testing at a national lab, meaning it is safe to deliver breathable gas.

There’s an appetite in the market for Johnson’s machine. A U.K.-based physician has already built his own MakerVent and is assisting Johnson with development. Now that the device has cleared ISO testing, Johnson hopes to get it in front of the FDA for approval.

“I understand that MakerVent won’t be the right fit for every situation that calls for a ventilator,” Johnson said in a Bellofram press release. “But in these challenging times, I believe it’s important to do something, to keep moving forward, and I hope MakerVent can help.”