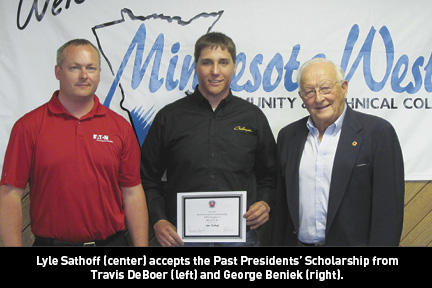 The Granite Falls campus of Minnesota West Community & Technical College announced that second-year Fluid Power Technology student Lyle Sathoff of Armstrong, Iowa, was awarded a scholarship in the amount of $6,037.56 by the 34 past presidents of International Fluid Power Society’s Minneapolis-St. Paul Chapter #5. The past presidents and the companies they worked for were solicited for contributions to help fund this scholarship.

George Beniek and Travis DeBoer awarded the scholarship to Sathoff on May 8, 2013. Beniek, who is a former president of the chapter, is retired from Eaton Corp and was responsible for organizing the scholarship. DeBoer, the current chapter president, is employed by Eaton Corp.

The Past Presidents’ Scholarship offers a full year of tuition reimbursement to a second-year student dedicated to the fluid power industry.

Lyle Sathoff graduated from the Fluid Power Technology program in May and has accepted employment at AGCO, a major agricultural equipment manufacturer in Jackson, Minn.