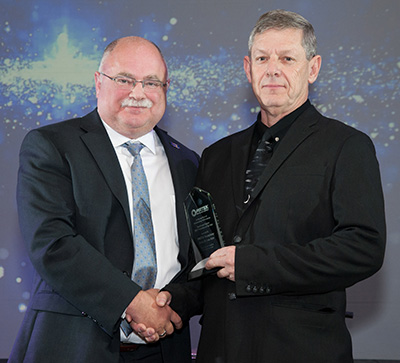 PIRTEK Broadway received high honors as PIRTEK USA’s National Franchise of the Year for 2017 – the second consecutive year the San Antonio, TX location has won the award. Owners Dean and Lisa Akin, who own two other PIRTEK franchises in Texas, received the award during PIRTEK’s annual conference, held this year in Scottsdale, AZ.

This year’s annual conference in March also celebrated the 20th anniversary of PIRTEK’s launch in the United States. The event included workshops and panel sessions featuring owners and executives from PIRTEK Australia, where the PIRTEK brand was first launched nearly 30 years ago.

In addition to the national award, the Akins’ San Antonio location also won the 2017 Southwest Region Franchise of the Year, which recognizes high performance, excellence in franchise operation, personal commitment and enthusiasm for the PIRTEK brand.

PIRTEK is the only franchise of its kind in the United States, providing hydraulic and industrial hose replacement sales and services. There are 75 PIRTEK franchises and a fleet of Mobile Service Vehicles throughout the United States. Globally, PIRTEK has more than 400 locations and 2,000 Mobile Service Vehicles in 23 countries. The company encourages U.S. veteran participation by offering them a discount off the initial franchise fee when they set up a new PIRTEK location.