I came across this instructive case study recently:

In the quest for improved fuel consumption, the manufacturer of an engine-powered, mobile hydraulic machine replaced the fixed-displacement pump powering the machine’s attachment with a variable-displacement unit.

The ground drive on the machine already featured a variable-displacement piston-pump (hydrostatic transmission), and so upgrading the attachment’s hydraulic circuit to a more efficient configuration was considered logical progression by the machine’s design engineers.

When this modification was tested, the engineers were shocked to find that fuel consumption had actually increased by 12% to 15%! Upon analysis, the hike in fuel consumption was attributed to an increase in oil viscosity brought about by a 30°C drop in operating oil temperature. In other words, the “thicker” oil had resulted in extra drag on the hydrostatic transmission powering the ground-drive, causing the machine to use more fuel.

The machine employed a two-section, combination heat-exchanger for both hydraulic oil and engine coolant (which was sized for the original, fixed-displacement auxiliary pump) with a hydraulic fan drive. The fan drive was thermostatically controlled based on engine coolant temperature.

The drawback with this arrangement is, due to the engine being thermostatically controlled and the hydraulic system not, air flow through the combined heat-exchanger depends entirely on engine temperature. This meant the reduction in heat-load from replacing the fixed pump with a variable-displacement unit resulted in a significant reduction in hydraulic oil temperature (normally a good thing!).

The engineers blocked off air flow to most of the hydraulic oil section of the cooler and ran the test again. This returned fuel consumption to the original level, but no significant improvement was seen.

It was concluded that the modification tested could result in a small cost saving with respect to a reduction in size of the oil cooler. But with fuel consumption being more important than any modest saving in cooling capacity, the idea of paying more for a pump that resulted in the oil being kept at a lower operating temperature—but increased fuel consumption—was irreconcilable to the machine’s designers!

One of the key take-aways from this case study is the impact hydraulic oil temperature, and therefore viscosity, can have on fuel consumption.

To re-cap the key points of the story:

Another take-away from this story, which is pertinent to machine designers and by extension to the people who buy their machines, is most designers do NOT treat the oil as the key component of the hydraulic system that it is.

The hydraulic oil’s viscosity (weight), viscosity index, and the optimum viscosity figure for the hydraulic components in the system were apparently not considered during the test. This suggests that the baseline or “normal” fuel consumption of the machine was just a happy coincidence.

Even after having discovered that fuel consumption goes up with oil viscosity, and although the possibility of reducing the installed cooling capacity was acknowledged and contemplated, there was apparently no consideration given to changing the oil’s viscosity to match the increased efficiency of the system. Nor was the ambient air temperature (or any variation thereof) during the test mentioned, either.

In other words, the machine designers failed to properly consider all four sides of what I call The Power Efficiency Diamond of a hydraulic machine (Fig. 1). 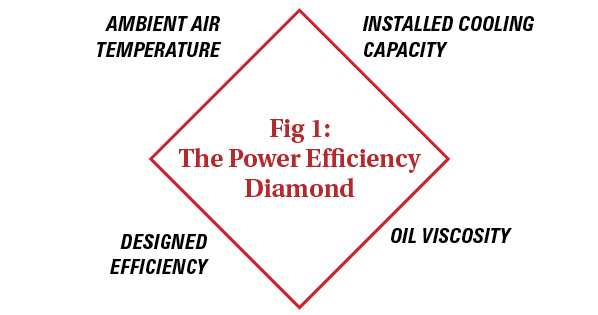 The four sides of the Power Efficiency Diamond of a hydraulic machine (Fig. 1) are all interrelated; change any one and the symmetry or shape of the diamond is distorted.

Designed Efficiency reflects the “native” efficiency of the hardware chosen for the system: the number of power-wasting devices present, such as proportional valves, flow controls, and pressure reducing valves; and losses “designed-in” by the dimensions and configuration of all the necessary conductors (pipes, hoses, adaptors and manifolds).

On the opposite side of the diamond, Installed Cooling Capacity, as a percentage of continuous input power, should reflect the designed or native efficiency of the hydraulic system. In other words, the lower the native efficiency, the greater the installed cooling capacity.

A machine designer has no control over Ambient Air Temperature—although he does need to know what this number is. But he does (or at least should) determine the other three variables: Design Efficiency, Installed Cooling Capacity, and Oil Viscosity. And as the pictorial representation of the Power Efficiency Diamond illustrates (and the above case study demonstrates), no one of these variables can be considered in isolation.

Looking at the Power Efficiency Diamond from an end-user’s perspective, it’s helpful to appreciate that even after the machine is designed, built, and filled with oil, Design Efficiency, Installed Cooling Capacity, and Ambient Air Temperature are moving targets—moving targets that affect operating oil viscosity and therefore power (fuel or electricity) consumption.

The possibility of variation in Ambient Air Temperature, particularly if the machine is moved between locations with different climatic conditions, is fairly obvious.

And while Design Efficiency doesn’t vary, actual operating efficiency typically deteriorates over time, due to wear and tear. Similarly, while Installed Cooling Capacity, as a percentage of input power, doesn’t change over time, the effectiveness of it can be reduced—by wear and tear of cooling circuit components and, in the case of air-blast heat exchangers, variation in ambient air temperature and altitude.

So getting a hydraulic machine into its power efficiency “sweet spot” requires informed design. Keeping it there requires that the change in dependant variables be kept to a minimum. In both cases, The Power Efficiency Diamond can be helpful to both machine designers and end-users in understanding the task at hand.