What is the difference between a “B” lip u-seal and a “D” lip u-seal? When do you use one style and when should you use the other?

Before we discuss the two styles of u-seal lips, let’s briefly look at the evolution of the u-seal and how different lip styles came about.

The u-seal shape evolved from the vee ring. Initially the u-seal was a vee ring with a flat back or heel, and all u-seals were symmetrical in shape. Gradually the shape evolved, and instead of a sharp-pointed lip design, the “D” lip style was used on all u-seals to improve sealing effectiveness. In the late 1950’s, a major seal manufacturer introduced the bevel lip or “B” lip design. The characteristics of the “B” lip and the new geometry of the u-seal created a more effective seal.

Loaded u-seals were introduced as a cost-effective way to improve low-pressure fluid leakage. When the “B” lip design is utilized in conjunction with an energizer (o-ring / quad-shaped ring, etc.) in the u-seal, a very high radial loading is created at the seal lips, which provides very effective sealing and a very dry surface. In rod-sealing applications, this is a very desirable situation. However, in double-action piston-sealing applications, the effectiveness of the loaded “B” lip seal may actually create problems.

In piston-sealing applications, the primary purpose of the piston u-seal is to keep significant amounts of fluid from passing through the gap between the piston OD and bore of the cylinder. A slight amount of leakage past the seal lips is not a problem like in rod sealing. Due to the cycling of the piston and alternating high/low-pressure cycles of the fluid, some leakage past the seal lip is normal and not a problem. 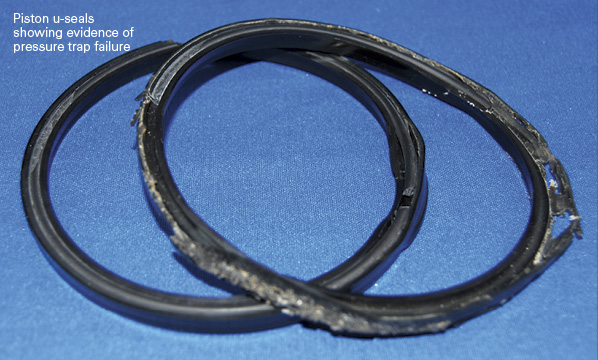 There are several ways to avoid this situation. One way would be to use non-loaded u-seals. Two unloaded seals could be used, or just one unloaded seal and one loaded seal. If using two loaded seals, using a “D” lip seal will lessen the sealing effectiveness of the seal and reduce the possibility of pressure trap between the two seals. Since the “D” lip seals less effectively, it is less likely to trap pressure.

“D” lip seals were specifically designed by seal manufacturers to be used in double-action piston applications to avoid the problem of pressure trap. However, if only “B” lip seals are available, they may be used by removing the energizer from one of the two seals. This reduces the low-pressure sealing effectiveness of the seal, which has the energizer removed (thus allowing the pressure between the two seals to by-pass the seal to the low pressure side of the piston), but has no effect on seal performance at high pressure.

Using unloaded u-seals, “D” lip seals, or “B” lip seals with the energizer removed, offers no guarantee of avoiding pressure trap. But it is less likely to occur if these steps are taken. The only way to avoid pressure trap is to use a piston designed for a single- piston seal.