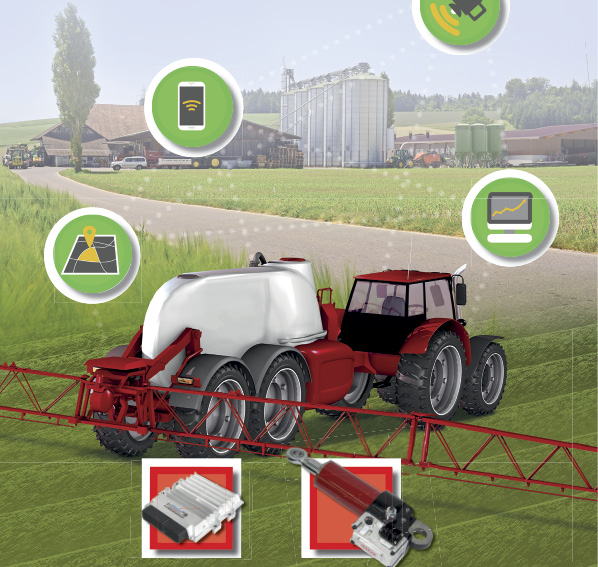 At the turn of the year 2017-18, the world’s population was about 7.28 billion people.1 The United Nations expects this number to rise to 9.5 billion by 2050.2 The agricultural area per person dropped from 0.74 acres in 1961 to 0.49 acres in 2012.3 While mechanization, breeding, and area expansion have so far been able to produce higher harvest yields, and thus maintain growth, a different solution will be needed in the future. The amount of land available for agricultural use is, after all, not unlimited, and the current increases come at the cost of valuable untouched woodland resources.

Agricultural land is also being used to grow energy crops to meet the increasing demand for energy. Agriculture, just like industry, sees the Industry 4.0 (Fourth Industrial Revolution) as the next development step that will increase the efficiency of production, with more intelligent machine control providing greater yields and reduced loss in harvest, transport, and storage.

Another goal is to reduce the consumption of fertilizers and pesticides by collecting and analyzing large volumes of data (“big data”). In summary, precision farming means: greater knowledge, more intelligent control, and more efficient performance. This is precisely where intelligent mechatronic systems can help.

Aware of the Machines Doings: Now and How

High-precision hydraulic controls make it possible to increase working width and speed. Intelligent systems (e.g., GPS steering, headland management) reduce the drivers’ workload, allowing them to work more effectively and with less stress, while giving them time to plan subsequent tasks. Components like the modular HY-STEER system (Figure 1) for electro-hydraulic superimposed steering systems, use GPS data or sensors (row / lane recognition) to support autonomous steering of the machine, with safety playing a crucial role. Manual steering will still be given priority so that the driver can intervene at any time. Depending on the particular safety requirements, partially or fully redundant systems can be used with duplicate sensor, control, and valve technology, with appropriate software and controllers. 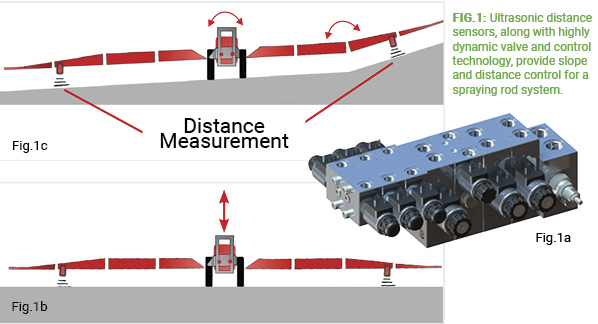 The latest developments in agricultural machinery focus on increasing output per area to reduce working time and costs. This can be achieved by increasing the working width or improving the speed. However, these two factors combined with vibrations and bumps in the ground surface made it difficult for the rod system to be kept at a constant height above the crop. Deviations in height impair the efficiency of the plant protection product. To reduce the driver’s workload without compromising height consistency, components can be used to establish active rod system control. Ultrasound sensors monitor the distance between the rod system and the crop, and the controller actuates proportional valves to correct any deviations (Figure 2). The intelligence of this system is located mainly in the TTC controller, as the system needs to regulate the height with limited vibrations despite the intense motion forces involved. The proportional poppet valve series PWSM06020W, developed especially for this application, has an adjusted characteristic curve that enables sensitive turning and rapid compensation movements.

To increase output per area, the working widths of tillage equipment and sowers have become increasingly larger in recent decades. The tasks performed remain the same. When sowing, the distribution, the separation, and the exact filling of the seeds are monitored and regulated. In both soil working and sowing, the working depth must be set and continuously readjusted. With working widths of 75 feet, the ground conditions can vary so much that the working depth needs to be set in individual segments distributed across the working width. This means that hydraulic oil has to be supplied to up to 40 cylinders that are working with a variety of pressures and cylinder strokes. Using central control blocks usually results in thick hydraulic hose bundles supplying the individual cylinders.

The smart cylinder (Figure 2), allows the hosing to be minimized as the cylinders are connected to a continuous pressure and tank line, much like an electronic bus system. The valves, the controller, and the pressure and position sensors used to control the cylinders are integrated in each cylinder and are connected to a CAN bus. The optimal sowing depth can now be calculated on the basis of offline geo-reference data or online sensors. The individual sowing units are controlled via CAN bus signals, so that various sowing depths can be set to match local soil conditions (Figure 6). This results in better plant growth and increased yield. Thanks to the functionality of the smart cylinders, they are also recommended for other applications in agricultural engineering.

Precision farming entails stricter demands with regard to function, precision, and processing time. This results in a significant increase in the complexity of the machines as well as the corresponding mechatronic systems. The electronic part of these systems needs to be able to process more and more information in increasingly complex calculation algorithms. Accordingly, more and more data and data flows are transmitted between various controllers within the machine, between human and machine, or externally to other machines or communication networks. HYDAC offers a telematics module for this purpose, TT Connect Wave.

Sensors are responsible for detecting what the machine is currently doing and how. Whenever more information is required to enable particular functions, more sensors are needed. It is not only the number of sensors that must be increased, but also the number of measured variables. Thankfully, an extensive range of sensors has been developed to meet these needs (Figure 4). For applications in agricultural machines, these are mainly sensors for pressure, distance, position, angle, inclination, fluid level, temperature, and speed.

To accommodate this large number of different sensors, some with different output signals, electronic controllers need to have numerous input channels with highly flexible signal adjustment. The calculation algorithms, which are sometimes complex and often need to be run in real time, require a highly powerful computer core. The controller requires access to a large number of sufficiently powered switching and proportional outputs to control the hydraulic actuators. On the machine side, the functional units still largely communicate via the classic CAN bus. Agricultural machines in particular mainly rely on ISOBUS communication, which has become standard. These requirements can be met by controllers from the HY-TTC 500 family. A high-power 32 bit processor core forms the hub of these controls that meets the needs of the sensor system and the hydraulics with almost 100 inputs and outputs. CAN and ISOBUS interfaces enable internal and external machine communication. Modules of the HY-TTC 30 family can be added for decentralized architectures or simple I/O extensions.

The Path to System Integration

To put together a complex system made up of hydraulics, sensors, controllers, and control algorithms, considering the subsystems individually is not enough. This particularly applies to highly dynamic systems such as the suspension in agricultural vehicles or position control for attachments under the influence of oscillation caused by bumps in the ground and steering movements. To allow the interactions of sensors, controllers, and hydraulics to be optimized early on, simulation tools such as AMESim, MATLAB, or RecurDyn are recommended as needed, and even combine them for co-simulations. This makes it possible to discuss the interactions of the components with the vehicle manufacturer early on and to optimize them with regard to the mechanical conditions. Exchanging mathematical simulation models with the manufacturer simplifies the entire development process.

In the further development stages, the vehicle developer faces the task of combining the domains of hydraulics, sensors, controllers, and displays as well as possible, then testing them. For this task, development-support software program like “MATCH” is well-suited. MATCH is a modular development environment that supports the designer in system development, software development, testing, initial operation, and simulation, in addition to documenting results.