Today’s industrial robots are well-fitted for the needs of mass production. They can perform repetitive tasks with high performance within a well-structured environment. Their capability of dealing with process uncertainties or producing different products (or product variations), however, is limited. Therefore, the economically viable use of industrial robots outside mass production is also limited.

Most of today’s standard robots require robot experts to program them. Especially in small and medium-sized enterprises (SMEs), those experts are regularly not available, posing yet another obstacle for widespread robot deployment. To overcome these obstacles, the consortium of the research project SMErobotics1 is working on different aspects of the robot lifecycle with the vision of deploying cognitive robotic systems on SME shop floors. An integral part of the project is eight demonstrator setups, which are used to evaluate and optimize the research and technical developments based on realistic manufacturing conditions. Reference applications from different industrial sectors have been selected to cover a broad range of manufacturing scenarios and end-user needs. 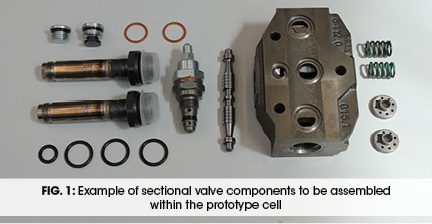 One of these demonstrators is the HyLight (short for hydraulic valve assembly using sensitive compliant lightweight robots) robot cell. This cell was developed by Brandenburg University of Technology, Chair of Automation Technology in cooperation with Bucher Hydraulics S.p.A. and Fondazione Democenter Sipe to cover the assembly of a family of sectional valves (Fig. 1) at the Bucher Hydraulics facility in Reggio Emilia, Italy. The targeted use-case is characterized by a large number of variations and small batch sizes for each respective variation. Therefore, a robotic work cell with a high degree of flexibility was needed. Fast changeover between different variations had to be possible, and new variations have to be teachable in an easy way. Additional difficulties arose from the assembly process itself: the insertion of the valve piston is difficult to realize with conventional industrial robots due to small cylindrical tolerances of the assembly components, which are below the robot’s positional accuracy. Also, the quality of the coupling between the piston and valve section has to be evaluated as part of the assembly sequence to avoid significant amounts of rework during subsequent manufacturing operations. 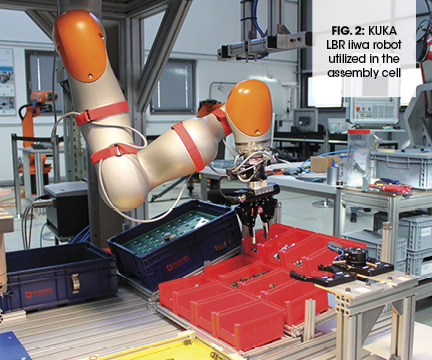 The developed robot cell prototype is based upon the KUKA LBR iiwa lightweight robot (Fig. 2). Most industrial robots are programmed and controlled based on positions. Thus, the positional accuracy of the respective robot limits its applicability. The KUKA LBR iiwa is equipped with torque sensors on all of its joints. By comparing the measured with the expected torques (considering f.i. the current motion and load), external torques and forces (such as reaction forces during assembly operations) can be detected. Using a specific control mode (impedance control), the robot also is able to react to those forces and torques in specific ways—e.g., a virtual compliance can be assigned to certain axes or Cartesian motion directions. Other possibilities are to let the robot generate a defined contact force or force oscillation. These capabilities are used in the demonstrator cell to automate the challenging assembly steps of the targeted use-case.

The most critical process (being the valve piston insertion) was solved using an oscillating motion of the robot’s end-effector in combination with a (program-wise) reduced Cartesian stiffness of the robot. Due to the reduced stiffness, the robot compensates positional and angular deviations, while the oscillating motion avoids jamming between the different edges on the piston and the valve section. After successfully assembling the piston, the robot performs a force-based quality check of the piston coupling, which is mimicking a currently performed manual quality check operation, but allows the definition of quality threshold values and the detailed documentation of this quality check. Only sections where the piston coupling meets specifications are assembled further. Possible malfunctions that can be detected using this test are that the piston cannot be shifted correctly within the valve section (due to a too-tight coupling) or that the valve section has impermissible leakage (due to a too-loose coupling).

In total, almost 20 different assembly operations have been realized. All of them have been packaged into separate functions of the robot cell. Utilizing these functions, the automatic generation of the assembly sequence for different valve section variations has been realized. The cell operator only has to load the production plan (including valve variations that have to be produced and the respective batch sizes) and has to ensure that all required assembly components are available in the work cell. 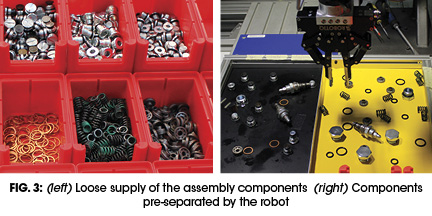 The form of supply of the assembly components has been another important aspect during development of the prototype assembly cell. Due to cost and space constraints, a presorting of the different assembly components in matrizes or magazines is not possible. Instead, almost all components can be supplied loosely in small boxes, as it is the case for the current manual workstation. The robot then performs a pre-separation of the components and then grasps the pre-separated parts using a 2D-vision system (Fig. 3). 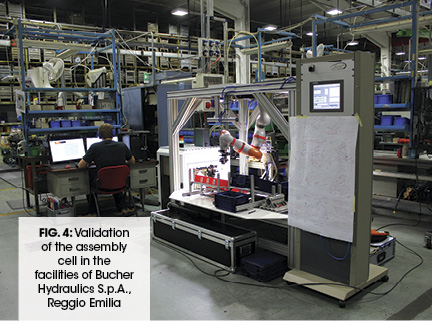 The described assembly cell prototype has been set up at the Bucher Hydraulics facilities in Reggio Emilia (Fig. 4) and was deployed during several days of production in November 2015. During this period, the robustness of the individual assembly processes and the overall cell performance have been evaluated. Based on the experiences of this test-deployment, a modified version of the assembly cell will be developed by a robotics integrator.

1The SMErobotics project is funded by the European Union’s 7th Framework Programme under Grant Number 287787.