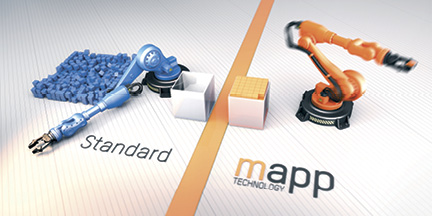 The new robotic functions in the company’s mapp technology portfolio include both serial and parallel robotic kinematics, such as SCARA and delta robots. The user interface is based on familiar IEC 61131 programming methods. The robotic functions integrate seamlessly into the overall system, so there is no need for a dedicated robotics controller. The robotic kinematics are configured graphically in a web interface, so programming in the conventional sense is not necessary. The mapp components can handle manual operations, such as jogging and point-to-point movement of the tool center point. Technicians can run diagnostics on the robot via the easy-to-use web interface.