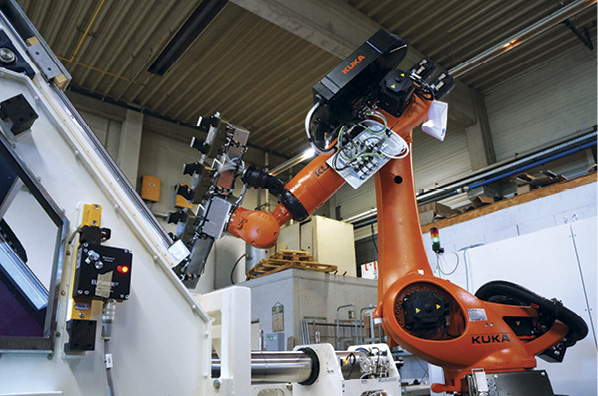 Shot blasting better protects powertrain components from damage, while increasing their cyclic loading capacity. Automobile manufacturers use shot blasting for metallic components, such as engine, chassis, and transmission parts that are subjected to high levels of stress in later use. For example, during the shot blasting process of shafts and pinions in the automotive industry, small abrasive blasting objects are projected against the surface to be treated at high speeds, using compressed air. This process generates a residual compressive stress, increasing the permanent strength of the material by up to 60 percent. At the same time, the treatment enhances the material’s bending strength and corrosion resistance and expands its surface (such expansion is important primarily for bonding components).

Pneumatics plays a major role in the process, and, according to Martin Stolte, CTO at V+M Systems GmbH, a company specializing in shot-blasting systems, shorter air lines can  provide improved system performance that saves energy. One method of shortening air lines in the industrial robots used for shot blasting is to have the valve positioned near the load. When an automotive manufacturer customer added the Aventics AV05 series to its list of approved components, the engineers at V+M Systems were able to integrate pneumatic control of the robot arm directly at the load due to the compact design and the light weight of the valve system from AVENTICS.

Unlike standard valves with a rectangular base plate and mounted valve, in the AVENTICS
Advanced Valve (AV) family, the spool is arranged diagonally in the valve housing, reducing the volume of the valve on the base plate by approximately 45 percent. The valves in the AV series are also nearly 40 percent lighter because of high-performance polymers and a specially developed injection molding method.

Mounting the valve directly on the moving robot arm valve had no effect on the robot dimensioning, and, according to Stolte, this positioning resulted in reduced assembly time and costs when piping, lower compressed air consumption for users (thanks to a reduction in dead volumes), and an overall increase in the energy efficiency of the shot-blasting system.

The integrated fieldbus connection and the input and output modules from the AVENTICS Advanced Electronic System (AES) can process analog and digital signals. As a result, V+M Systems can incorporate machine diagnostics via the valve system by reading in pressure switches via the integrated digital input module and transferring the machine status to the controller via the fieldbus.

One thought on “Shot Blasting for Hard Surfaces”