There are some prerequisites for reading this article: you need to read last month’s article entitled “System Integrators: An Energy Challenge,” you need to have your calculator handy, and you probably ought to have your Lightning Reference Handbook at your fingertips (available at www.ifps.org) because this article is going to examine the thought process used when trying to provide the most energy-efficient fluid power system.

A quick recap: two fictitious fluid power applications were described: one hydraulic and one pneumatic. The challenge is to see who can come up with the most energy-efficient system to do the work. The hydraulic system will be rated by the kW used and the pneumatic system by the standard cubic feet of air consumed.

This article will cover what I believe should be considered for the two systems. I will not give away my answer, but I will tell you what I think the targets should be.

With the hydraulic system, the first thing we need to do is determine the power requirements for the system. This is a challenge because of the changing power requirements throughout the cycle. As you recall (or maybe just read), a cylinder rod has to extend horizontally for two seconds with almost no load at a rate of 12″/second. The rod then comes in contact with a heavy object that it has to move 96″ in 8 seconds. It then has to retract under no load for the full 120″ and cover the distance in 10 seconds. The system now rests for a full 2 minutes waiting to start again. We were given the fact that the cylinder has a 6″ bore, a 4″ rod, and a 120″ stroke. We are to assume a return line pressure of 100 psi and an overall efficiency of 85%. The weight of the object to move is 300,000 pounds, but it is slid sideways, not lifted, and there is a given coefficient of friction of 0.25.

Now, at first look, it seems pretty straightforward; the speed is always 12″/second, so we only have to calculate the flow rate for that speed and then add the pressure required. But there is a wrinkle here. The heavy object is not moving when the rod comes in contact with it, so it will have to be accelerated at a rate that will allow it to cover the distance in 8 seconds. It seems reasonable that there will be a hesitation of about 1 second as the rod contacts the object, builds pressure, and satisfies the capacitance of the plumbing. This means I have to cover the 96″ in just 7 seconds.

Now pull out your Lightning Reference Handbook and turn to page 101 where the formulas are listed. Take a pencil and write these acceleration formulas in the margin:

F = ma, d = 0.5at2, and V = at where F equals force in pounds, m equals mass, a equals imperial acceleration, d equals distance traveled in feet, t equals time in seconds, and V equals velocity in feet/second. You’ll be glad you have these the next time you take an IFPS certification exam.

A 400-hp motor with a 205-gpm pump would do the job, but remember, the contest is to find the most energy-efficient system. That means we need to use the smallest electric motor/pump combination that will do the job and then push it to its nameplate power as long as it is running. We need to take a look, not at the maximum power consumption, but at the average power consumption.

To find the average power consumption, let’s take a second-by-second snapshot at what is going on in the system. I know, I know. It sounds like a lot of work, but we are the professionals, right? It really will not be that bad. The total cycle time is 140 seconds, but the working portion is only 20 seconds. So we need 20 snapshots of the energy usage; 2 seconds no-load extending, 8 seconds full-load extending, and 10 seconds no-load retracting. When we calculate the flow of pressure at each second, we can find the kW usage at each second. We then add them all up and divide by the total cycle time to get our average power usage.

I see some of you are getting glassy eyed already, so I will give you the answer. The average power consumption for this system is 7.51 kW (10.07 hp). Given the 85% overall efficiency, we have a target of 8.84 kW (11.85 hp). The winning system will be the one that comes closest to this number.

Okay, let’s take a ten-minute break and then we will come back and take a look at the pneumatic challenge…. 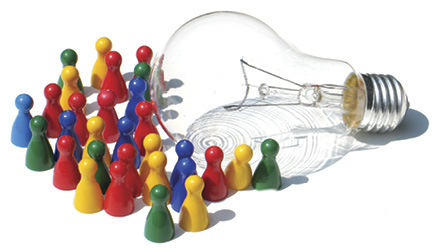 The pneumatic system poses a somewhat different set of challenges. We discussed in an earlier article that hydraulics and pneumatics differ in the way they use energy. Hydraulics is a “pay as you go” system where we put in the energy and then immediately either use it by doing useful work or release it by turning it into heat. Pneumatics is more of a “store it now and use it later” system where we add energy to a volume of air, store it in a receiver, and then use it later as needed. The amount of air we use is described in terms of Standard Cubic Feet (scf). In order to determine the amount of scf to be consumed, we need to find two things: the maximum pressure required and the volume to be filled.

This is what we know. A 4″ bore cylinder having a 1″ rod and with a 24″ stroke is mounted horizontally and is fully extended. It is attached to an 85-pound spacer that is wedged between two parts. It will take 1000 pounds of force to break the spacer free, and then the cylinder retracts in 1 second, dragging the weight of the spacer with a coefficient of friction of 0.15. After a 30-second dwell time, the cylinder extends in 1 second against the inertia of the spacer and the 0.15 coefficient of friction. The parts are then placed against the spacer and 10 seconds after the extension, the process repeats.

The fact is we never need both the maximum pressure and the full volume at the same time. Once we break the spacer free, we only have 211.86 pounds of resistive force requiring only 18 psig. When we are extending, we have the same relatively small resistive load. Your job is to find a way to use the least scf and still get the work done. I am suggesting a target of 0.4 scf per cycle.

Give it your best shot.