More than 60,000 people attended the 2017 FIRST Championship presented by Qualcomm Inc., held for the first time across two cities. Combined, FIRST Championship Houston (April 19-22) and FIRST Championship St. Louis (April 26-29) brought together 30,000 students on 1,400 teams from 62 countries, plus 6,000 mentors/coaches/adult supporters and 2,400 volunteers, among other special guests—and not to mention more than 1,300 robots.

FIRST teams in competition participated in heart-pounding robotics matches and intense judging sessions. In both cities, the championship events featured action-packed closing ceremonies that included final robotics matches, live entertainment, inspiring speeches, and special awards. In between matches, speakers such as global music artist, entrepreneur, and philanthropist will.i.am and Major General Garrett Harencak of the United States Air Force addressed crowds of tens of thousands of young innovators and their supporters at Minute Maid Park in Houston and The Dome at the America’s Center in St. Louis.

The game action was covered live on the #FIRSTChampLIVE streaming show hosted by RoboSports Network, with previews, post-match analysis, and interviews. News media were onsite to spotlight the world’s largest celebration of STEM for students.

The thunderous atmosphere in venues where major sporting events occur helped realize FIRST Founder Dean Kamen’s vision: “Athletes don’t get quizzes and tests on the field. They get letters and trophies and recognition,” Kamen said. “If that can inspire kids to work extra hard, why can’t we create an atmosphere where FIRST teams get recognition in a competitive elimination tournament that is in every way as exciting as any other sport, but the skillsets they learn here are so important to their future. Every kid on every team here can turn pro.”

In addition to attending matches, innovators of all ages could engage in several special events focused on STEM and career building. New to the 2017 FIRST Championship was the alumni mixer. Held at both events, the mixer brought together approximately 500 FIRST alumni to meet, network, and hear from speakers from presenting sponsors BAE Systems, Boeing, and NVIDIA. 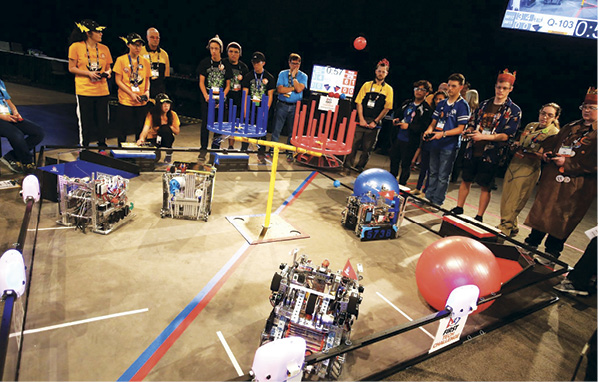 “I really enjoyed the alumni mixer,” said one alum. “It was awesome to get to meet other FIRST alumni and hear about how FIRST affected their lives just as it affected mine.”

Returning to the 2017 FIRST Championship was the Maker Faire-inspired FIRST Innovation Faire, which featured a combined 48 exhibitors. Attendees lined up for hands-on demonstrations, including a chance to try the Power Rangers VR demo from presenting sponsor Qualcomm. In addition, 50 exhibitors were on-hand at Scholarship Row to talk to FIRST students about college and scholarship opportunities.

FIRST teams, mentors, sponsors, alliances, and others gave a total of 102 conference sessions at the 2017 FIRST Championship Conferences presented by Southwest, ViaSat, and Walt Disney Imagineering. Topics included career advice sessions on “Putting FIRST to Work” and the annual “Women in STEM” panel. (Videos of these sessions will be available on the FIRST website.) 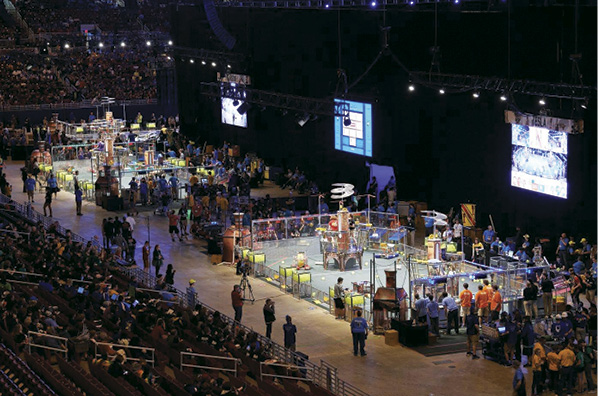