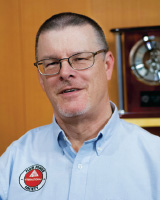 The International Fluid Power Society (IFPS) is pleased to announce Richard Bullers, CFPPS, SMC Corp. of America, who was elected the 57th president of IFPS during its annual meeting in Kansas City, Mo. Mr. Bullers will take office in January 2017.

Mr. Bullers has served as IFPS first vice president, IFPS vice president of membership and chapters, and as chair of many IFPS subcommittees. Mr. Bullers is currently a senior applications engineer for SMC Corp. of America. SMC is a leader in pneumatic and motion control technology, providing industry with green products and energy-saving solutions to support automation worldwide.

“I am thankful for this opportunity to further serve the International Fluid Power Society, the IFPS Board, and all of our members and staff who support the noble cause of advancing professionalism and education in the fluid power industry through certification,” said Mr. Bullers.

The following officers were confirmed at the IFPS 2016 Annual Meeting:

The following Directors-at-Large were also confirmed: