Vacuum cups are available in a wide variety of compounds or materials, which are chosen based on the application for which they are intended to be used. There are many different compounds, but most of the cups found in use today are made from four fundamental materials. This article will discuss these four materials and their appropriate application to better understand where and when they should be used in comparison with each other.

There are numerous reasons for choosing a particular compound. The first choice is normally dependent upon the hardness of the material. This will determine the ability of a vacuum cup to seal against the surface of the product being handled. The most common hardness measurement scale used is Shore Hardness, more commonly referred to as Durometer. In fact, a durometer is an instrument used to measure hardness, and therefore, the Durometer scale is the actual unit used to refer to the hardness of the material. 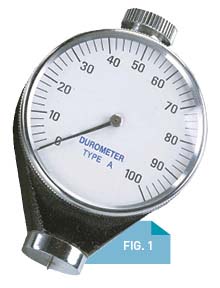 The durometer was invented by Albert Shore (b.1876) in the early 20th century in New York City and is so named because it is derived from the Latin word duro, which means “hard or tough.” Fig. 1shows a typical dial durometer.  As the pin is pressed into the rubber, it moves a dial pointer. The harder the material, the more the pin is moved inwards, and consequently, the pointer achieves a higher dial graduation.There are different durometer scales based on the materials being measured, such as plastics or rubbers or metals. The scale used to identify the hardness of vacuum cup materials is Durometer Scale A, which ranges from 100 (hard) to 5 (soft). Vacuum cups are typically available in compounds with a hardness of 35 to 70 durometer A. Fig. 2shows a comparison table for hardness options of the most popular cup materials.Another, sometimes very important, characteristic of a vacuum cup material is temperature resistance. Most pick-and-place applications occur at room temperature, but in the plastic injection mold industry, for example, temperature is often considered in vacuum cup choice due to the high heat of parts being removed from mold tools.  At the other end of the scale is the handling of cold products, such as refrigerated or frozen food packaging. Typical vacuum cup materials have a temperature range from -40ºF to +400ºF (-40ºC to 204ºC). The temperature limitations of standard vacuum cup materials may warrant the need for specialized vacuum cup materials, which are less readily available and may be cost prohibitive. 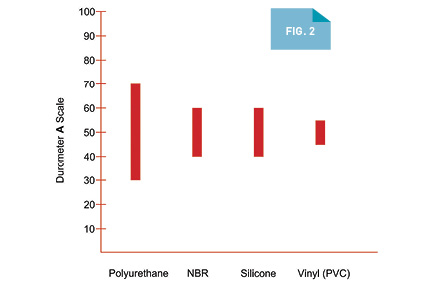 Understanding the actual temperature of the product being handled could save a lot of trouble in vacuum cup material selection. There is nothing worse than everybody in the procurement channel adding his or her own casual safety factor. What started off as a 70ºF requirement could easily end up at 200ºF once it gets to the cup supplier, which is an unnecessary expense. Furthermore, the duration for which the cup is in contact with the load should be considered. If a cup is rated at 200ºF but the part being handled is 220ºF, a two-second or so vacuum hold would unlikely be catastrophic to the vacuum cup. Also, the area underneath the vacuum cup immediately cools under a vacuum due to the reduction of air molecules (a vacuum definition). If the plastic injection mold is 200ºF, this does not necessarily translate to the part being removed being the same. In fact, if it were a thin plastic part, it’s likely that within a matter of moments, it would be cooler. These factors should all be considered. Fig. 3 shows typical temperature ranges of popular vacuum cup materials. 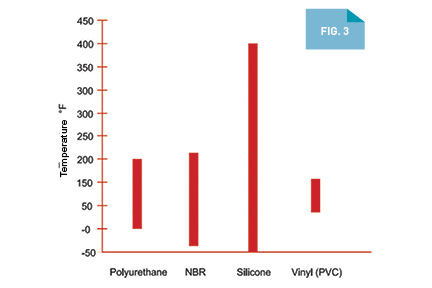 NBR, also known as Nitrile rubber or Buna-N, is the most common. NBR is used in general industrial applications and is most certainly found in steel handling, plastics handling, and any other application where the cup should be resistant to oils and related chemicals. In most applications, this is the “go-to” material choice based on its low cost, normal availability from suppliers, and its good wear resistance. The hardness of this compound typically is about 60 durometer, although, depending on the manufacturer, this can be as low as 40 or as high as 70. However, NBR cups are normally 60 durometer. NBR is often overlooked for injection molding as the user specifies very high temperatures and therefore opts for silicone. NBR is more than suitable for most plastic injection part handling as its temperature rating is often near 200ºF. As explained before, the ACTUAL temperature of the part being handled should be understood instead of the mold tool itself. NBR is also suitable for wood and cardboard handling as it has very good wear resistance. This is certainly better when compared with silicone, which is often the only alternative in most manufacturers’ offerings.

Silicone is also a very popular cup compound but typically costs some 30-50% more than NBR. Silicone does offer the advantage of having extreme temperature resistance—both cold and hot, ideal for handling frozen packaged food and hot plastic-injected molded parts with a temperature range in excess of 450ºF (230ºC). Silicone is typically softer than NBR, allowing it to seal against contoured or rough surfaces, such as cardboard sheet, corrugated plastic, and plastic food packaging. Silicone is also offered with FDA (title 21) compliance to allow it to come into direct contact with food and drug products. The FDA specification basically ensures that dyes and colorants do not bleed out when handling food and drug products, which would contaminate the process.

Metal-impregnated silicone is also very popular in the food industry. In high-speed production lines, metal detectors can sense that a vacuum cup has fallen into the food packaging that typically contains baked goods like bread loaves, rolls, and buns. The wear resistance of silicone compared to NBR is poor. Typically on an abrasive surface such as cardboard, an NBR cup would last at least twice as long. That said, silicone has a better seal on the cardboard, and consequentially, a higher vacuum level can be achieved, which offers higher load capacity for the tool. One feature trades off against the other.

There is one very important note about silicone that must be understood by the vacuum cup user. Silicone should never be used on surfaces to be painted, such as automotive body panels, as the paint will not bond properly on the area touched by the silicone compound cup. The end result known in the paint industry is “fish eyes.” Most automotive plants involved in steel stamping and painting of car bodies do not allow any silicone products in the factory at all for this reason. 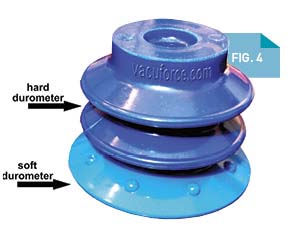 Polyurethane vacuum cups are used in potentially high-wear applications. Polyurethane has very high wear resistance compared with both silicone and NBR, but typically is more expensive. The temperature-resistance range is a lot less than both NBR and silicone, as shown in Fig. 3. Some manufacturers offer dual durometer vacuum cups, as shown in Fig. 4. The dual durometer cups offer a softer than normal sealing lip of about 30 durometer but a harder body, maybe 60 durometer, to offer stability in high-speed transfer and even vertical shear plane lifting. The disadvantage of this type of dual compound beyond all else is that it is very expensive to produce, being a manual process, compared with the NBR and silicone compounds, which are produced in larger quantities automatically or in multiple cavity molds.

Vinyl cups or PVC (polyvinyl chloride) cups are a relatively low-cost alternative to the aforementioned materials of NBR, silicone, and polyurethane; however, the mechanical properties of PVC, which is a plastic material, is inferior to that of the rubber compounds. Although rubber products wear more quickly than PVC due to abrasion, PVC will more likely “work harden” and fracture. This is normally found at the stress points of the cup where the most movement occurs, such as a bellows corner. The fact that PVC is very hard wearing does not offset its poor mechanical performance. Typical PVC cups have a limited temperature range and durometer offering. PVC cups tend to be a lower initial cost, but consideration should be made to the ownership cost with regards to their typical shorter life compared with other readily available compounds.

The color of various compounds depends on the manufacturer. NBR cups are normally black, silicone typically red or white but available in all types of colors. Polyurethane is available in a whole host of colors. The point is, you cannot tell the compound of a vacuum cup just by looking at it. The best way to understand what the cup material should be is understanding the application. Does it NEED to be silicone? Could NBR, which is less expensive, be more suitable? Understanding the application is absolutely key in selecting the correct compound. And, like all applications in manufacturing, just because that’s what is being used now does NOT mean that’s what should be used going forward.

This article is intended as a general guide and as with any industrial application involving machinery choice, independent professional advice should be sought to ensure correct selection and installation.

Daniel Pascoe is General Manager of Vacuforce Inc., manufacturer and distributor of vacuum components and systems for industry in North America. Daniel can be reached via the Vacuforce website at www.vacuforce.com or directly at dpascoe@vacuforce.com. Find Vacuforce on Facebook and keep updated on Twitter.