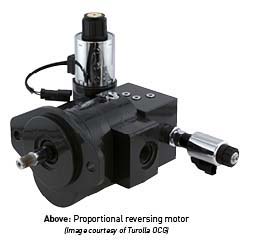 With increasing demands on mobile equipment manufacturers to produce emissions-compliant and highly efficient machinery, new methods for saving energy have become necessary. Mobile equipment has evolved much over the past several years due to these regulatory demands. One area where a significant amount of machine energy is wasted is in the cooling system.

The need for a cooling system arises because much of the fuel energy that goes into a machine is lost in the form of heat due to inefficiencies of all types. If this heat is not managed properly, a variety of system failures can occur and therefore render a machine useless. Machine cooling is a necessity and, therefore, a significant portion of energy must be dedicated to operating the cooling system.

The ultimate goal of the cooling system in mobile machinery is to control the temperature of the various components of the machine. This temperature control can apply to a variety of onboard systems not limited to the following:

Several different methods can be used to manage excess heat in mobile machines. For simplicity, this work concentrates on the use of a driven fan to move heat out of the machine.

The method for driving the fan has traditionally been mechanical, consisting of various combinations of shafts pulleys and gears attached between the engine and the fan. The drive ratio between engine and fan has traditionally been selected to provide adequate cooling across the entire range of engine speeds at the maximum-designed ambient air temperature and the maximum system heat rejection. This method is required to prevent overheating of the various systems, which can lead to the subsequent failure of those systems and expensive repairs.

The power consumption of a fan as a function of its speed can generally be described as proportional to the third power of the fan speed. This relationship is the ultimate reason for designing a more efficient fan drive system. By reducing the speed of a fan by 10%, the power consumption of that fan can be reduced by roughly 33%.

A much more efficient way to operate a cooling fan is to adjust the fan speed independently of the speed of the engine and proportional to the amount of cooling required for the system. For the right fan and cooler combination, this method would provide adequate system cooling at all conditions while at the same time minimizing the fan speed across the drive cycle to avoid excessive energy consumption.

Several different methods for proportional cooling exist on the market today. These methods include, but are not limited to, electro-viscous clutches, mechanical continuously variable transmissions, electric drives, adjustable pitch fans, and hydraulic drives.

Proportional hydraulic fan drives can be realized through various methods ranging from the simplest open-circuit system through the most complex closed-circuit system. 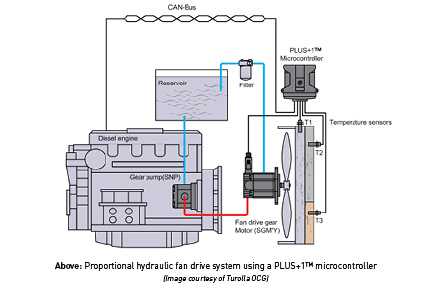 Due to relative simplicity and low cost, the majority of low-powered hydraulic fan drive systems consist of a fixed pump and fixed motor with a proportional bypass valve to provide speed control in the system. The bypass valve can be thermo-valve actuated or electronically actuated to adjust fan speed to provide adequate cooling. Reversing can be accomplished through the use of a bidirectional motor and a directional control valve.

Medium-power systems may consist of a pressure-compensated open-circuit piston pump and a fixed displacement motor. In this system, the fan speed is controlled by controlling the pressure compensation setting of the pump. The setting is normally electronically adjusted. Reversing for this system can be accomplished using a bidirectional motor and a directional control valve.

High-power systems may consist of closed-circuit systems where a large over-center piston pump drives a fixed displacement motor. In this case, both the speed and direction of the motor can be controlled by controlling the displacement of the pump.

For all of the previously mentioned systems, fail-safe controls must be implemented to avoid overheating of machine components. This is accomplished by forcing the system to demand full fan speed in the case of a loss of control signal.

In addition to efficient proportional fan control, hydraulic systems offer several other advantages. The flexibility to locate the cooler in a different part of the vehicle and at a different orientation allows for more efficient cooling. This flexibility can also save space near the engine for emission-control hardware.

The ability to reverse the fan through the use of valves or over-center pumps also allows these to be applied in dirty environments where reversing the fan can clean out the cooler. This is especially useful in agriculture applications where crop material can quickly plug the cooler and thereby reduce cooler efficiency.

When considering proportional fan drives, it is also good to know that noise legislation can have an effect, as well. Proportional systems are only required to be qualified at 70% of full speed when compared with fixed ratio systems. This allows the fan to operate at a much quieter point for noise qualification, while at the same time allowing the machine the ability to achieve its required cooling capacity.

Because hydraulic fan drive systems can control the speed of the fan proportional to the cooling requirement of the machine, they have proven to be an effective and efficient way to reduce energy consumption in mobile machinery. The added packaging flexibility, fail-safe modes, and reversing functionality that hydraulics can provide offer additional value to these systems.

Matt Kronlage is a fan drive applications engineer for hydraulic gear products at Turolla OpenCircuitGear. The focus of his position is on applying high-efficiency fan drive systems and providing customer training. He can be reached at mkronlage@turollaocg.com.

One thought on “Fan Drives in Mobile Hydraulic Applications”