Your Air Tool is Inefficient – Here’s Why

Since we are surrounded by vast, unlimited volumes of atmospheric air, it is easy to think that the compressed air in your plant piping is free. But if you closely compare the power you put into the air compressor at one end to what little power you get out at the other, the story is not so good. Further, it is very common to have inefficiencies creep in and rob you of the small amount of remaining energy that makes it to your air tool.

Compressed air systems are one of the least efficient ways to transfer energy to a mechanical device. At 100 psi, it takes between 16 and 22 kilowatts (kW) of power to produce 100 cubic feet per minute (cfm) of flow, depending on the type of air compressor used. This rating is called “specific power” and is in units of kW per 100 cfm. An air motor producing one horsepower (hp) of power from its shaft consumes about 30 cfm. Therefore, it takes about 7 to 8 hp of power input to the air compressor package to produce about 1 hp of shaft power at the tool.

If the air motor is run full time through a two-shift, five-day-per-week operating schedule totaling 4,160 hours per year, the total electrical cost at $0.10 per kWh would be about $2,330 per year. If, instead, the same mechanical load is driven with a direct drive electric motor, the electrical cost would be $390 per year.

In all, a compressed air system like this would deliver about 10 to 15% of its original power input to the load. Not a very impressive number, especially when you realize the system just described is a theoretical lossless system. (See Fig. 1.) 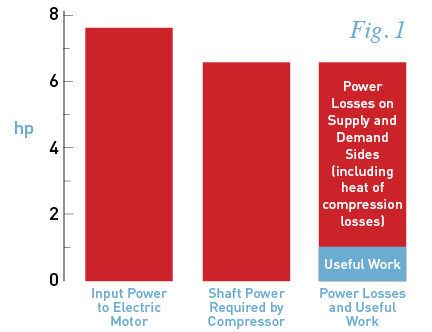 We all know that compressed air systems are not perfect. The air compressors that produce the air do not always run in the best manner possible due to inherent inefficiencies at part loads. Often, due to the way the compressors are controlled, the actual specific power will be two or three times that of the lossless system, doubling or tripling the cost per unit. Air filters and piping friction losses cause pressure differential, which consumes more power, with the compressor input power requirement going up 5% for every 10 psi in pressure differential it has to overcome.

Air dryers also consume power; refrigerated dryers have small motors inside that add to the electrical costs, and if desiccant dryers are used, between 15 and 20% or more of the compressed air produced can be consumed by air dryer purge, never getting to the final destination.

And leakage and wasted energy due to excessive system pressures further rob the system of its efficiency. Studies show that typical systems waste about 50% of all the compressed air produced. (See Fig. 2.)

Based on these items, the overall compressed air system efficiency “wire-to-work” can fall to levels substantially lower than the 10 to 15% previously quoted for a lossless system. It is not uncommon to find that less than 3% of the energy input to a system actually goes to producing real mechanical work. 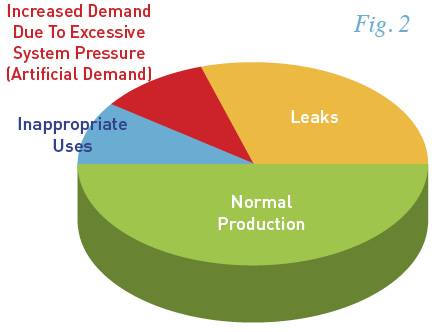 What Can Be Done?

It is unlikely you will throw all of your compressed air tools and machines in the garbage once you become aware of the poor performance of typical compressed air systems. Air tools and equipment are too useful and, in some cases, the only practical way to operate. The key point is, however, that based on the high cost of compressed air, we should all be careful about using and abusing this expensive utility.

Some keys to minimizing costs while boosting system efficiency:

2 thoughts on “Your Air Tool is Inefficient – Here’s Why”