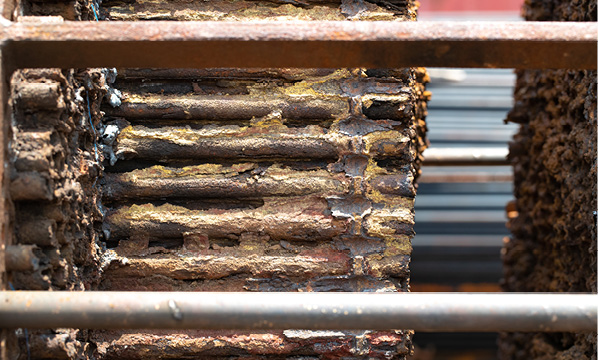 When handling difficult materials, such as sewage sludge or corrosive chemicals, heat exchangers can be particularly susceptible to fouling. Having previously looked at the general issue and different types of fouling which may be experienced, it is also useful to look at some of the specific fouling situations encountered by our engineering teams.

Fouling can generally be divided into one of four categories: chemical fouling (including scaling), biological fouling, deposition (or sedimentation) fouling, and corrosion fouling. In all cases, prevention is better than cure, but as each of these different types of fouling is caused by a different combination of chemical and physical reactions, prevention will take different forms.

The following paragraphs describe some of the most common types of fouling we encounter and the best methods of prevention, but it is by no means an exhaustive list.

Limescale is the most familiar chemical fouling agent, as for many of us it builds up in our kettles and pipework. In industrial applications, scaling is particularly problematic where cooling water has a high mineral content.

Symptoms include the classic “limescale” building up inside the heat exchanger (and usually the whole water line, including pipes and pumps), although local factors and different minerals will result in a different appearance. Prevention takes the form of chemical dosing of the water (for example with salt or acid for “hard” water), and chemical agents are required for cleaning or removal. 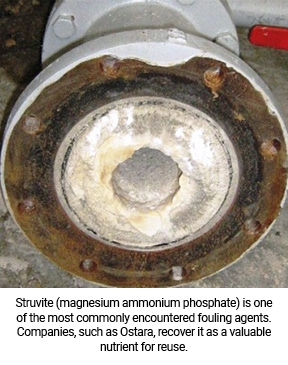 Struvite (magnesium ammonium phosphate) is a phosphate mineral which often precipitates in urine (it is the material that forms kidney stones), particularly in humans and animals which have plant-based diets (which are high in magnesium) or which are infected with ammonia-producing organisms.

Struvite can be a particular problem in sewage and wastewater treatment, especially systems which include anaerobic digestion as this releases ammonium and phosphate. Struvite forms a hard scale on many surfaces, including inside pipe and heat exchangers.

The same considerations which apply to chemical fouling and scaling also apply to preventing struvite formation in heat exchangers. Keeping water temperatures below 65°C will help prevent struvite formation, as will restricting the amount of phosphorus added to the digester. Struvite can often be physically removed, and as struvite is a valuable mineral, many wastewater plants and businesses are looking into commercial struvite recovery.

Vivianite (ferrous phosphate) is a particular problem where ferric chloride (also known as pickle liquor) is added to sludge to control hydrogen sulfide (H2S) emissions. When water temperatures are too high this can lead to the deposition of a hard blue/green material (vivianite) on the heat exchanger surface.

As with struvite, keeping water temperatures below 65°C will help prevent vivianite formation, as will carefully controlling the chemicals added to the sludge stream, although this is usually determined by other factors. Cleaning is very difficult, often relying on the use of hydrochloric acid solutions, which may not be compatible with the materials used in heat exchanger and system construction. 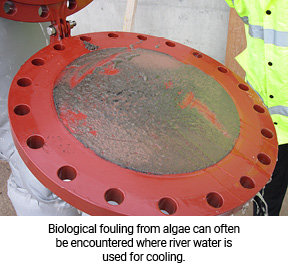 Algal fouling is particularly encountered where untreated river or canal water is used for cooling. Environmental regulations prevent the use of chemical additives and also limit the temperature increase, so algae quickly grow in what is an ideal environment.

Using high velocities or even scraped surface heat exchangers can prevent fouling, as can the use of construction materials such as copper or brass. A regular cleaning regime is usually necessary.

Zebra mussels are an invasive species which is found across the world. They are now established in fresh water bodies in the South East of England and are found in sewers and sewage treatment works. They enter pipework as larvae, then colonize and grow – in the worst cases, hundreds of tonnes of mussels have been removed from some water treatment works.

They are relatively uncommon in heat exchangers, and can be controlled by keeping the velocity of the fluid through the exchanger above 2 m/s to prevent larvae attaching, and by regular flushing.

In some wastewater treatment sites, final filtered effluent (FFE) taken after the filter press is used as a free cooling medium. However, due to the high level of biological material contained in FFE, it has a high fouling potential and fouling can quickly occur, depending on the exact nature of both the FFE and the heat exchanger design.

UV treatment of the FFE can help to reduce the biological load, and therefore the potential for fouling, but cleaning normally relies on caustic cleaning-in-place (CIP) systems. It is therefore important to specify heat exchangers and other equipment that can cope with such caustic cleaning materials.

Burn-on occurs where the water temperature is too high, causing the sediments (particularly organic materials) to become baked on to the tube wall(s). It often occurs where a malfunction has arisen, for example heating has continued while product flow has stopped, resulting in overheating of the material.

Burn-on can be reduced by good design of the overall system and interlocking the controls for both water and sludge pumps, so that if one stops, so does the other one. Control of the water temperature (ideally keeping it below 80°C) will also help prevent burn-on. Where it occurs it can usually be removed by physical or chemical cleaning.

This is the most common type of heat exchanger fouling and is caused by particulates in the treated fluid settling out on the surface of the heat exchanger.

It will usually be prevented by good heat exchanger design and choosing the right heat exchanger for the job. For example, making sure that the fluid has sufficient velocity and pressure, the use of corrugated tubes, which can prevent sedimentation, and scraped-surface heat exchangers, which continually remove sedimentation are equally encouraged. 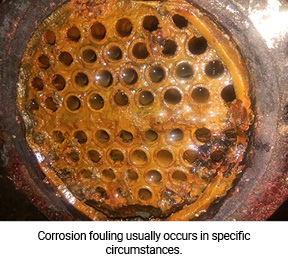 This usually occurs in specific circumstances where either the material being treated or the construction of the heat exchanger itself is particularly susceptible to corrosion. For example, aluminum and copper can be highly reactive and frequently suffers from galvanic corrosion or the formation of oxides on the tube surface where they have been used for the manufacture of heat exchanger tubes.

Using a material which is resistant to such corrosion, yet maintains good thermal transfer properties will overcome most of these issues. Good system design, for example to regularly remove grit, and regular cleaning will also help to prevent the formation of corrosion.

The above list illustrates some of the most common types of fouling are experienced in heat exchangers in real-world situations, but there may be others, particularly when you are treating materials with a high physical or chemical fouling potential or using high temperatures, which may favor certain chemical reactions or physical processes. 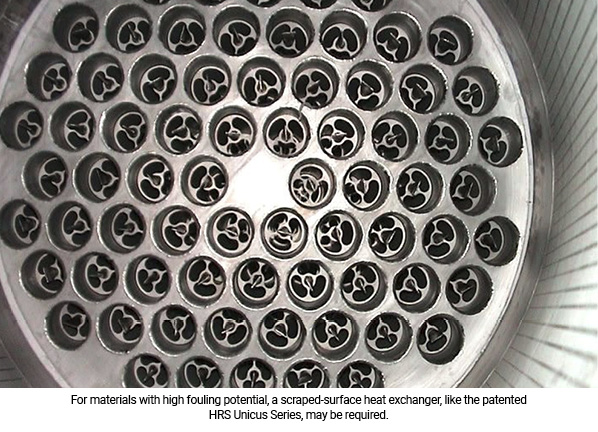 Heat exchanger designers and engineers will use a combination of materials analysis and the calculated fouling factor (a mathematical value which represents the thermal resistance of the deposit[s]) to ensure that the heat exchanger recommended for a particular purpose not only resists fouling for as long as possible, but that if fouling does occur, it can be cleaned and dealt with efficiently and effectively.