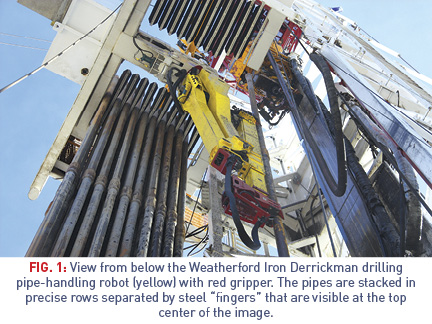 Drilling rigs are essentially hoisting machines that raise and lower drill pipes into wellbores that can be four miles or more in depth. A large motor (top drive) rotates these drill pipes to drill the well.

While industry has made great strides in behavioral-based safety, oil rigs can be dangerous places to work. Mechanization and automation are keys to achieving the next level of safety and productivity. Though many rig functions are now performed by machinery, the handling of drill pipes hasn’t changed much over the years and continues to be a manual, labor-intensive process. Derrick hands, as these workers are called, manipulate the top of 90 ft.-long drill pipe assemblies (called “stands”) while a floor hand pushes that same 90 ft. pendulum to and from well center.

The derrick hands’ workstation—80 ft. above the rig floor—is called a diving board. The workers wear fall-arrest harnesses to keep them safe, but they still rely on an escape mechanism called a “Geronimo line” when they need to get to the ground in an emergency. The 90-ft. pipe stands are composed of three 30-foot sections, with each section weighing 5,000 pounds or more. The drilling industry has been looking for a robotic pipe-handling system that can keep humans out of harm’s way and also speed up the pipe-handling process.

One company offering an automated solution is Weatherford International, one of the largest international oil and natural gas service companies. The company provides products and services for drilling, evaluation, completion, production, and intervention of oil and natural gas wells. Weatherford has developed an advanced pipe-handling solution called the “Iron Derrickman.”

In order for an automated solution to work, the system needs to ensure precise control of the positioning of the arms that move the pipe. Fig. 1 shows Weatherford’s pipe-handling robot. The hydraulically actuated machine hangs below the diving board on a drilling rig, clamps on a pipe stand, and lifts it just above the drill floor. The robot arm also clamps the pipe near its top to stabilize it as the arm moves.

“When handling pipe, we need to drive the machine to precise coordinates for each axis of motion,” said Jim Jones, business unit manager for Weatherford’s Iron Derrickman product. The motion axes are slew (rotation), extension, scoping up and down, and tilt, which translates into X and Y coordinates. “In order to expedite the pipe-handling process, the slew, extend, and scoping axes are moved simultaneously,” he added.

To control the hydraulically powered motion precisely, the RMC150 eight-axis electro-hydraulic motion controller (Fig. 2), manufactured by Delta Computer Systems of Battle Ground, Wash., was selected. Weatherford engineers had past experience with Delta controllers, plus the local hydraulics distributor could provide all the solution elements quickly. “The processing capacity of Delta is well beyond what we need today,” said Jones, “so we have horsepower headroom to add new capabilities to our system.” The Weatherford Iron Derrickman system uses a PLC that tells the motion controller which coordinates to go to, and then the RMC150 moves the axes to implement the command, which is typically to move a stand from one place to another along a precise trajectory. The controller gets its position feedback information from a series of linear transducers that are mounted on the hydraulic cylinders—three on the cylinders driving the motion axes, two on the clamping device that grips the pipe, and one encoder mounted on the spindle axis.

The RMC150 provides a number of specific advantages for controlling the pipe-handling robot. Its ability to handle SSI inputs (“SSI” is a high-speed, highly reliable synchronous serial interface standard) permitted the use of robust high-resolution magnetostrictive position transducers that were installed into the hydraulic cylinders. Having high-resolution position information results in precise velocity measurements, allowing machine builders such as Weatherford to take full advantage of the RMC’s advanced tuning capabilities in order to deliver smoother motion. Another feature, the Output Filter, ensures that the command signal to the valve does not contain large spikes, which could shake the handler. Although this system, like any large, multi-dimensional hydraulic system, tends to vibrate easily, the RMC150 was able to ensure precise, yet smooth motion.

To achieve the linear motion in the x-y-z Cartesian coordinates required for traversing the pipe along the “alley” and then into the “fingers,” the RMC150 provides synchronized curvilinear motion profiles, or “curves,” to each of the axes (Fig. 3). The RMC150 dynamically creates the motion profiles from the kinematic equations provided by Weatherford’s mechanical engineers. Not only does the RMC need to be able to determine the axes’ target positions given the required Cartesian coordinates (inverse kinematics), it also needs to ascertain the handler’s target position given the current positions of the axes (forward kinematics) at all times, including when the system starts after a shutdown.

The motion of the stand along the trajectory is controlled by moving a single “virtual” axis in the RMC, to which the scoping, rotational, and extend axes are all cammed via the curvilinear profile. (“Camming” refers to the process of gearing a slave axis to the motion of a master axis via a programmable relationship based on the position of the master.) The motion of the slave axis can be non-linear, which is the case in the Weatherford system, where the handler arm must move each pipe stand in different directions to get it from the well head to its storage place and vice-versa. To set up the camming operation, the RMC allows the developer to program a virtual master axis that moves between target coordinates. Then, as the virtual axis is commanded to move the handler from the well head into the alleyway and into the fingers, the RMC seamlessly transitions between entire sets of motion profiles. The operator can easily change the handling speed by just adjusting the velocity of the virtual axis. 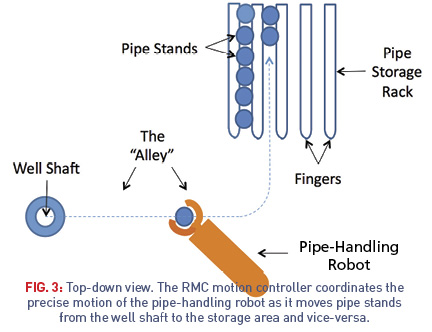 In order to provide a scalable solution, Weatherford needed a motion controller that could easily be adapted to various-sized handling systems. This was achieved by creating variables in the RMCTools software for storing the system measurements. The RMC uses these to dynamically create the motion profiles. By setting these variables, the RMC can be adapted to any size pipe-handling system in a matter of seconds. The RMCTools software includes a Curve Tool for visually and numerically validating and/or modifying the curves. “Our practical experience indicates that we can now trip at the rate of 30 stands/hr.,” said Jones. “The machine is capable of motions that would exceed 40 stands/hr. This is significantly faster than the old manual method, and much, much safer.”