Microscopic Particles Can Cause Catastrophic Failure

It is a common scenario for machinery using hydraulic systems: a microscopic solid particle causes catastrophic failure of a component. According to industry experts, contamination causes 65% to 90% of all hydraulic-system failures. The malfunction may be intermittent, requiring extensive troubleshooting to identify the faulty component.

Once identified, the component must be removed for repair or replacement, another time-consuming and often messy task. During all this time, the machinery is out of service, resulting in lost productivity and profits. To prevent a recurrence, the source of the contamination is investigated, and often the cylinder is a prime suspect.

Due to relatively large internal volumes and manufacturing processes, new or repaired cylinders have developed a reputation for harboring destructive contamination. Consequently, when a sensitive valve or pump fails, the finger is often pointed at the cylinder manufacturer.

To prevent a hydraulic cylinder from contributing to the failure of other system components such as valves and pumps, the cylinder manufacturer must create and follow strict processes.

The first step is to identify the type of contamination specific to the hydraulic-cylinder manufacturing process. There are three common contamination types.

Hard particles. Hard particles include various types of metal, such as steel, iron, bronze or aluminum, that may be generated during cutting, machining, grinding, or welding. It also includes dust and dirt. Airborne dust can settle on the surfaces of the internal cylinder components before assembly. Granular absorbents are especially troublesome because they swell and clump when oil is absorbed. Larger hard particles can cause sudden and severe damage, such as cutting seals and scoring metal surfaces. Smaller hard particles, also called “silt,” can be equally destructive, but they gradually cause wear and damage over a longer time period.

Water. Water can be introduced from a humid environment or component parts that are not fully dried after cleaning. It can cause corrosion and microbial growth.

Step 2: Stop contamination at the source.

After identifying potential sources, the cylinder manufacturer can take steps to prevent building contamination into the cylinder during the assembly process. Although cutting and machining processes are necessary, the parts can be cleaned thoroughly. Work surfaces, storage locations and material handling devices can be kept free of dust, dirt and metal particles. Parts that have been cleaned can be kept in sealed plastic bags or covered with plastic to prevent recontamination.

Before providing the complete cylinder to the customer, the last line of defense is to remove any contamination that eluded the preventive measures. Functional testing is standard to check for internal or external leaks and to ensure the cylinder provides the correct stroke. As the cylinder is cycled during the test procedure, hydraulic fluid flushes out contamination built into the cylinder. 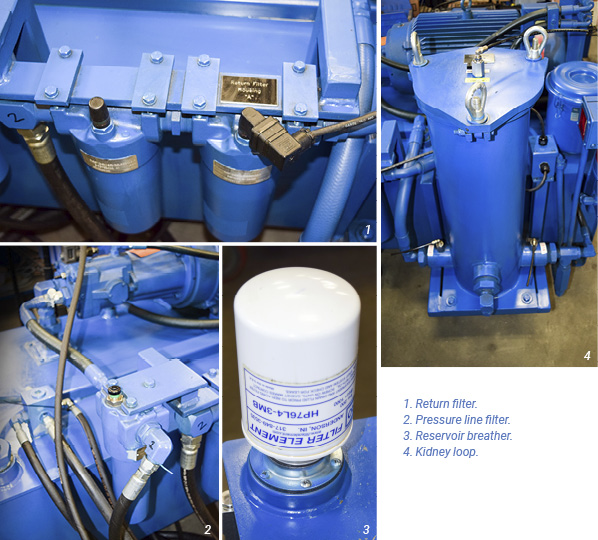 Hydraulic-filter manufacturers have developed high-performance filter elements that are effective at removing microscopic particles, even down to 1 micron. The best strategy is multiple filters at different locations in the system.

Even particles that are too small to see can cause damage, so visual examination of the fluid is not adequate. The accepted conventional methods available for analyzing fluid include gravimetric, laboratory analysis and inline particle counters.

The gravimetric method involves passing a sample of the fluid through a patch that captures the particles, then weighing and examining with a microscope. This method is relatively labor intensive and typically has a high margin of error.

Another option is to collect a bottle sample and submit it to a laboratory for analysis, which in addition to a particle count can also check the viscosity, water content, composition of the contamination and a number of other factors. While the results are comprehensive and accurate, waiting for results can be costly. For example, if a sample is taken and two days later the report indicates a problem with the fluid, all cylinders tested during those two days are at risk of being contaminated. 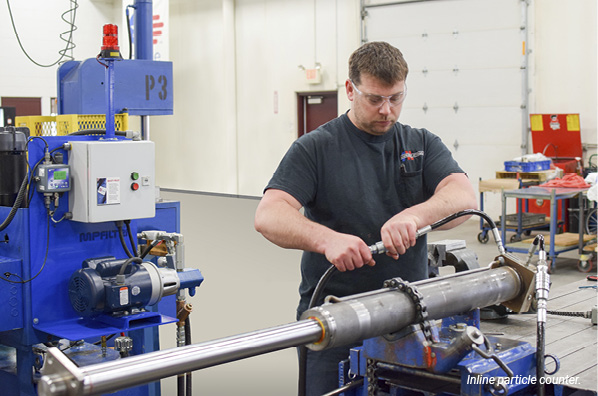 The third method for analyzing fluid uses an inline particle counter. It directs a laser through a stream of fluid and sensors detect the size and number of particles, providing continuous and immediate detailed particle count reports and ISO cleanliness codes. This real-time information can drive actions, for example, waiting to test until fluid cleanliness has improved. The test of a specific cylinder can also be associated with a fluid cleanliness level, which may be useful in the event of a warranty claim. The data can also provide feedback on the effectiveness of continuous improvement initiatives to improve cleanliness.

Reduce Your Risk of Contamination

Machine OEMs and end users should take measures to prevent costly and time-consuming hydraulic failures. In addition to installing and maintaining hydraulic filters, preventing ingression of particles into the system and excluding moisture, it is also beneficial to consider contamination when selecting a hydraulic-cylinder supplier. Specifically, choose a manufacturer that understands the risk of contamination and has implemented appropriate standards and procedures. These preventive measures should start when the first piece of material is cut by a saw, continue through machining and welding, and carry through to the completion of functional testing. These precautions require investment and commitment by the cylinder manufacturer. Likewise, the customer should look beyond the purchase price of the cylinder and consider the much larger value of reducing the risk of contamination-related failures.