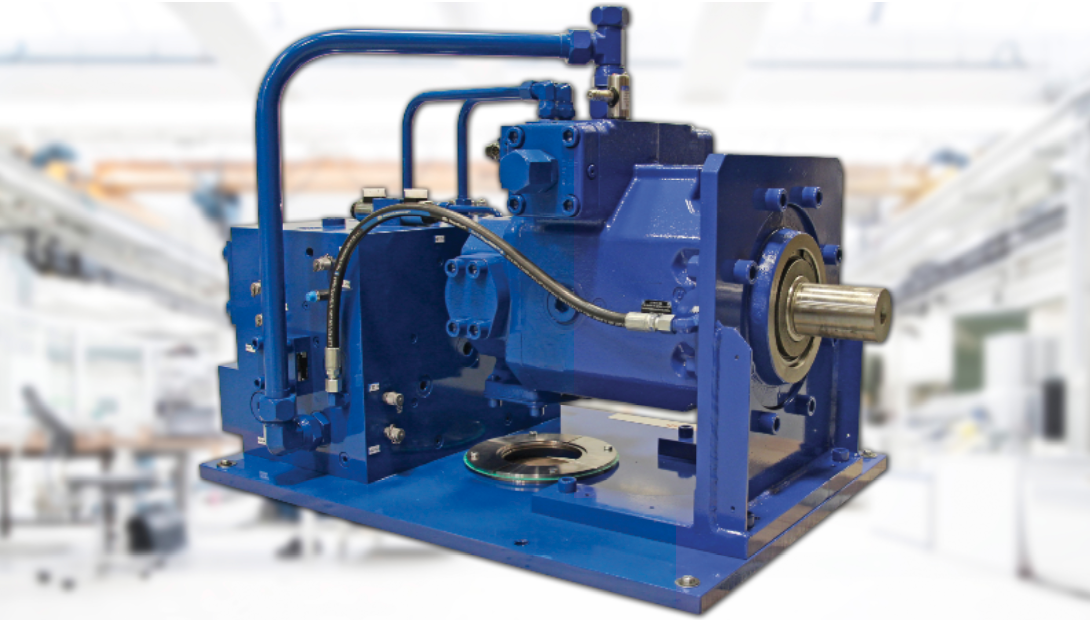 The extrusion press is the workhorse of manufacturing. Long valued for its ability to produce high-quality parts, it can operate productively for many decades with proper maintenance and life-cycle management. However, this longevity is now leading to some issues in the industry; many extrusion presses are using outdated, inefficient, and unreliable hydraulic pumps.

Superior Extrusion found itself confronted with this situation. In 1996, the company purchased a used 1,650-ton Farrel press. In use since 1971, the 7-inch press has since produced over 200 million pounds of aluminum extrusions for the Michigan-based manufacturer. The press currently runs one 10-hour shift per day, with plans to move to two shifts in the near future.

In an aluminum extrusion press of this size, hydraulic components are under significant and constant wear and tear. Decades of production of light truck accessories, roof racks, commercial building products, and military materials had taken its toll on the variable-displacement legacy pumps driving the press. Maintenance of the hydraulic elements was becoming increasingly expensive.

A key, decades-old component on the press is the hydraulic pump. Like many customers using similar model pumps on other presses, repairing and maintaining these older pumps in operating condition usually required rebuilds, and doing so was becoming a challenge for Superior. Parts became obsolete, and qualified technicians became harder to find. Furthermore, rebuilds do not always deliver the same quality and service as the original unit. And, in many cases, the parts being replaced were rebuilds as well.

One major consequence of the pump’s aging condition was that hydraulic fluid leaks became increasingly problematic. Oil leaks increased costs for the company, which logged 65 to 70 hours of downtime every year to repair these leaks. From constant welding to fabricating new pipes, the cost and hassle of downtime takes its toll.

The importance of the press required careful planning that would identify the right solution and minimize downtime during installation. Superior approached Bosch Rexroth to help develop the solution since they had worked together on other hydraulic projects in the past, both for new systems and equipment upgrades.

The nature of the original pumps required an engineered solution that would match the way older components operated. The original pump sat on top of the tank, drawing oil up from the reservoir and supplying it to the system through two supply ports.

Most modern pumps operate with just one supply port, so installing a new pump would require careful planning and reconfiguration of the hydraulic system. At the same time, Superior and Bosch Rexroth both wanted to design an approach that would provide a relatively simple and straightforward upgrade solution.

Prior to working with Superior, the Bosch Rexroth team recognized that this pump style was becoming obsolete. In response, engineers in Bethlehem, Pennsylvania, collaborated with associates in Germany to develop a unique system to directly replace the old, expensive, and inefficient pumps. The initiative involved the design and engineering of a pump/manifold/controls solution and prototype construction.

The prototype underwent 150 hours of testing at the Bethlehem facility and over 2,000 testing hours in production on a customer’s 2,400-ton extrusion press. The team instrumented the test unit with many types of pressure transducers and flow meters to record data. They completed a 100-hour test at full pressure, followed by a complete teardown of the internals to document the wear and tear. The results confirmed the drop-in solution met the company’s performance and reliability standards.

Superior Extrusion’s project was the first opportunity to apply the tested drop-in concept. At the solution’s heart was a Rexroth A4VSO 500 axial piston pump. Adding a check valve at the bottom of the suction pipe and injecting a partial filling volume into the pipe ensured that the pipe inlet was full on startup or under minimal flow conditions.

The Bosch Rexroth team also incorporated a custom manifold circuit designed to replicate the two-way function with two pressure ports in the same location as the legacy pump. Two-way cartridge valves type LC and LFA then directed the oil to the correct port. The solution conserved as much of the existing configuration as possible so that it bolted directly to the existing piping. The new Bosch Rexroth pump manifold deckplate preserved all of the existing press piping.

To control flow through the pressure ports, an HACD digital electronic control was configured to take the existing analog signals that previously controlled the legacy pumps and use those outputs to control both the A4VSO pump and the LC and LFA valves. This significantly simplified the controls challenge of swapping out the legacy pump and valves with the current generation of hydraulics.

The result was a drop-in solution that would modernize the press without the significant downtime or cost associated with a complete upgrade or replacement. In fact, the installation took place over a long weekend, with tear out happening Friday and full production by Tuesday.

The hydraulic pump retrofit produced measurable results almost immediately. The most significant improvement early on was the increase in press speed. Without any fine-tuning of the controls platform or the PLC code, the change was dramatic.

The speed of the press increased so much that when one particular die ran at 2,800 pounds per hour, Superior’s oven could not keep up with the production run.

Superior found the new retrofit operated more efficiently. The Bosch Rexroth pump used less energy to the extent that a few months after the retrofit, they swapped out 200-horsepower motors for new, more energy-efficient, 150-horsepower motors with no loss of performance. The oil temperature also decreased.

Finally, it appears that oil-leak-related downtime is being significantly reduced, from 65 to 70 hours per year previously to just three hours last year. Those savings added up, especially considering that press-repair time could run up to $800 per hour.