One common mistake in purchasing and installing compressors for the shop environment is choosing a compressor that is too large. When the compressor chosen is a rotary screw compressor, there are penalties to be paid if the compressor is much larger than the average compressed air load.

As we found out in my previous article (published in the Systems Integrator Directory 2015 issue), if a rotary screw compressor is chosen for shop duty, the unit will spend some time in the loaded condition, pumping up the system storage receiver and feeding the compressed air demand, and then spend the remaining time in the unloaded condition. Repair shops are generally lightly loaded, so most of the operation will be unloaded, especially in systems with small storage receiver capacity. Screw compressors consume about 25% of their full load power while in the loaded condition, even though they are not producing any air. In the above referenced article, some strategies were described to minimize this wasted unloaded power consumption.

How do you prevent problems like this? The primary strategy would be to install only the capacity you need, but it is very hard to predict the required air capacity. Another strategy would be to use compressors that start/stop, such as reciprocating compressors. But these units are typically loud, produce hot and oily compressed air that is hard to condition, and require the system pressure to swing widely, sometimes 30 psi or more between start and stop settings.

One other way would be to eliminate unloaded run time by using a compressor with variable speed drive control. These units are designed to start and stop at low loads with minimal unloaded run time while also varying the speed to match the demand at higher flows. If VSD compressors are oversized for the average load, they will simply turn themselves into a smaller compressor by automatically reducing the speed of the compression element. At the same time, power will be reduced, maximizing the efficiency of the compression process as much as possible. 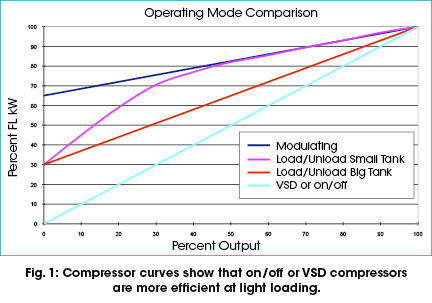 But even with VSD control, there can be efficiency problems, especially if the compressor is grossly oversized. Consider, as an example, a shop that repaired large earth-moving equipment. The facility was previously running a single 30-hp reciprocating compressor to feed shop tools and for various other miscellaneous uses. The shop needed to do media blasting to clean and condition the equipment. This blasting required peak flows of up to 375 cfm. The shop previously used a large diesel air compressor to feed the blasting, but the fuel costs had increased substantially and the unit was ready for replacement. The cost of using electric compressors was significantly lower. As a result, a new electric 100-hp compressor and air dryer was required.

The previous air compressor consumed an average of 2.7 kW while feeding an average of 12 cfm of shop demand and a peak of 50 cfm. Adding in the predicted blasting load, the projected air flows were estimated at 50 cfm average and 350 cfm peak. Projected energy consumption for a load/unload compressor at this loading showed that if a 400-gallon receiver (much too small for efficient operation) were used, the system would have consumed an average of 53 kW due to rapid cycling and inefficient unloaded run time. If a VSD compressor were used, the projected compressor consumption was expected to be much lower at 10 kW average.

Once the new compressor was installed, the installation was audited and it was found the actual average load was much lower than expected, only about 15 cfm. Because a VSD compressor was selected, however, the power consumption was averaging only 3 kW. Overestimating demand is very common due to safety factors that are typically added to sizing calculations. Luckily, the VSD could handle lower loads by turning itself down even further.

But there was a problem. The air compressor had a built-in refrigerated air dryer that was a non-cycling style. Non-cycling refrigerated air dryers control their operation by bypassing hot refrigerant gas around the evaporator inside the unit so as not to overcool the compressed air and create ice that would block the flow. This type of operation caused the air dryer to consume almost full power even though it was only lightly loaded. The air dryer consumption was 3.4 kW, even more than the original 30-hp compressor. The total consumption, including the compressor, was double the original compressor power, even with a slight increase in average flow.

Had a cycling-style air dryer been selected, it would have automatically turned its refrigeration circuit down to match the air loading, much like a refrigerator in a home turns on and off during normal operation.

The shop operators had saved themselves significant electrical operating costs by purchasing a VSD compressor rather than using a load/unload compressor, but due to the characteristics of the accompanying air dryer, some of the savings were lost.

A better solution in this case would have been to use the smaller 30-hp compressor for light loads and bring in the large compressor and air dryer only for blasting.

6 thoughts on “Size Matters When Choosing an Air Compressor”