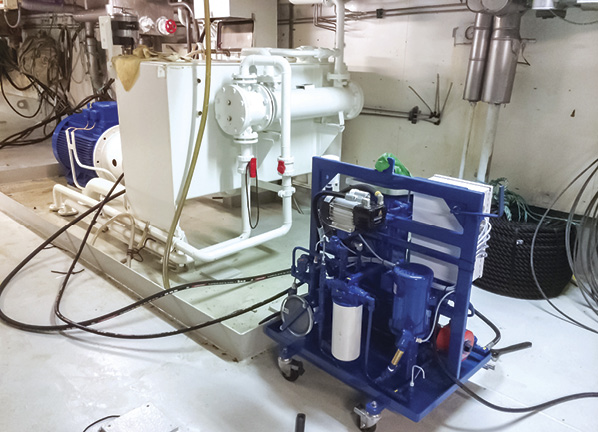 In marine applications, water can play havoc with fluid reservoirs.

A seal failed on a net hauler’s hydraulics out at sea. Saltwater was entering the hydraulic fluid on a 75-meter (245 foot) purse seiner through a seal leak, rendering the net hauler out of commission. Faced with frequent fluid exchanges (at a cost of $9,300 plus disposal) and substantial lost profits from downtime for replacement of the seal, the vessel owner was in desperate need of a solution.

Through fluid analysis, the owner found that the 1000-liter (265-gallon) reservoir of ISO VGA 32 hydraulic fluid contained 28564 ppm of water. If the ppm could not be reduced below 200, the fluid would inevitably have to be replaced. A goal of reducing the water content to less than 150 ppm was set, and a Hy-Pro V1S portable vacuum dehydrator was installed on the reservoir. The V1S ran for 10 days, with samples for analysis drawn on days 1, 3, 8 and 10.

The V1S reduced the water content in the hydraulic reservoir to a level where the net hauler was functioning properly again even before reaching the 150 ppm target. Breaking down the numbers, the V1S removed at least 26.5 liters (7 gallons) of water, and even more depending on ingression. The fishing vessel was able to continue operations and avoid frequent expensive oil replacement. 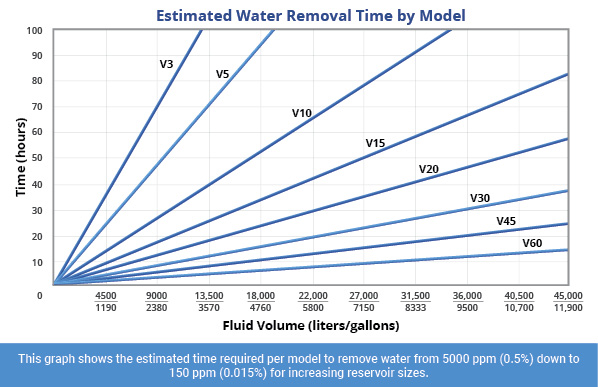 “The challenge with marine is that, because of the saltwater, there are more frequent filtration changeovers,” Close said. “This is common with pitch control because the actuators and hosing are exposed to saltwater. Anywhere you have the risk of water ingression is what the V1 is suited for.”

But the V1 is ideal for numerous marine applications and works for “anything from pitch control to general motor actuator applications.”

The V1 is essentially a kidney loop to help keep the oil clean and dry.

“It plays on the physical property of water,” said Richard Trent, a Hy-Pro regional sales manager. “Water will turn to vapor at a lower temperature when it’s under vacuum. The goal is to heat the fluid to a temperature of between 140 and 150 degrees F. Then that fluid is exposed to a vacuum of 24 to 25 inches of mercury, and at that temperature and vacuum, water will vaporize. The water vapor is pulled off by moving air, which is used to create the vacuum. The lubricant itself falls to the bottom of the chamber, where a hydraulic pump pulls it out, pumps it through a particulate filter, and sends it back to the reservoir.”

The V1 differs from other dehydrators on the market in two ways, Trent said.

The first thing, “is the amount of air we actually move. You’ve got to create the vacuum in the vacuum chamber and still have a high enough air flow to get those vapors out of the vacuum chamber. The fluid is warm coming out of the heaters into the chamber. But that area in the head space, which is where the water vapor goes, is cooler. So if you don’t get that vapor out of there quickly, it will cool off and turn back into water and rain right back into the fluid.”

A second difference is the simplicity of Hy-Pro’s VUDs. Many dehydrators are driven by a program logic controller (PLC), Trent said. “We have a PLC option, but our opinion is, let’s make a machine that’s simpler for people to troubleshoot than one with a PLC. With ours, you can troubleshoot it and just buy the individual parts that you may need to replace inside the panel from time to time.”

Trent said the V1 has many marine applications. It works “anywhere water is getting into a lubricant. Vacuum dehydration will remove not only the free water, but it’s the primary technology that will remove dissolved water as well.”

It does this while preserving helpful additives. “Vacuum dehydration has the ability to break the bond between the rust inhibitor and the water molecule so that you’re not running at 100% saturation. You can drive water content down to 20% of saturation, which means now you’ve got a lot of free rust inhibitors that are free to do their job within the fluid itself.”

Another marine application of the VUD is on ships, said Mike Flick, Hy-Pro field technical rep. “When a ship is in port, the propeller shaft rests on the seal. The seal then gets crushed a little bit. That allows the water to ingress in and the oil to leak out. The idea is to clean and dry the oil so it doesn’t ruin the hydraulic lubricating equipment or the bearings on the shaft.” 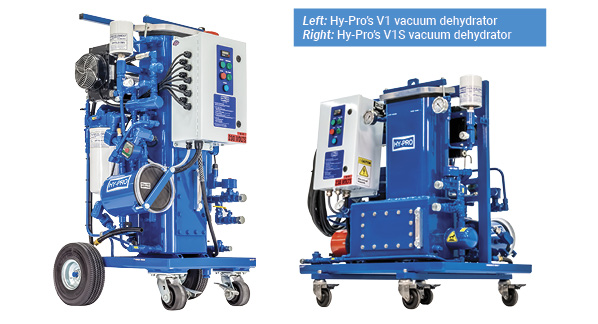 The difference between the V1 and other Hy-Pro VUDs is size. “The V1 runs at 1 gallon per minute. It’s for smaller applications. We also make the V1S, which is specifically for ships and has a lower center of gravity. The standard VUD would be for larger reservoirs, maybe 800 or a thousand gallons,” Flick said.

Besides the V1 and V1S, Hy-Pro makes eight other models that treat increasing reservoir sizes. But they all work on the same kidney-loop principles.

One unwanted result of the process that can occur is the creation of foam, Trent said. “You have to be careful about how you handle the fluid transitioning into the vacuum in the chamber. When you pull that vapor out, air can go back in, and that can cause foam.

“Most of the time foam occurs when a large amount of water comes through and you vaporize all that water at one time. We have a function on our machines called a foam sensor. When it senses the foam, it energizes a valve that opens the vacuum chamber to atmosphere. So it gets an in-rush of air from the atmosphere to knock the foam down. If you’ve got a bad lubricant where the anti-foam additive is gone, then you have to work with the foam, and the foam sensor will allow us to do that too.”

The technology’s been around for a long time, Trent said, “but it’s not a technology that a lot of industry is aware of.”

One thought on “Oil And Water Don’t Mix”