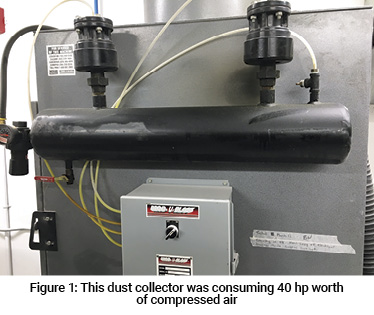 It is difficult to tell if air compressors are producing the correct output for the expected power consumption. Just because a compressor is running does not mean it is actually producing air. In fact, there are many instances where running compressors will be producing very little or no air at all, but still consuming significant power. An example of this was found at a medium-sized paint manufacturer, where one of the air compressors was consuming about 70 percent of its full load power, but due to mechanical failure it was producing zero air. It ran this way for a few years; nobody was the wiser.

Problems can happen when different types of compressors are mixed without special considerations about pressure coordination. A common problem occurs when a variable speed compressor is introduced into a system of fixed-speed units. Consider the experience at a wire manufacturer who purchased a VSD compressor at a 50% premium and proudly showed it off to a compressed air professional. After a few quick checks, the expert informed the staff the new compressor was not saving any power at all. This was clear from the data in the compressor controller. The compressor provider had sold the compressor, but did not advise the customer that new pressure settings were required. As a result, the compressor was inefficiently fighting with all the other compressors.

Problems can happen with air dryer installations. A car dealership purchased a refrigerated air dryer to remove the water that was contaminating their system and affecting their paint shop. After installation, they found that the water problems had a short hiatus but then continued. A careful inspection revealed that the air dryer was removing moisture, but the installer of the unit had improperly piped the water drain, causing a restriction, preventing the water from being expelled from the system.

Sometimes the dryer will not work correctly in the first place. A food processor purchased a very expensive heated blower desiccant dryer to process their compressed air to minus 40 degree dew point. When an auditor measured their system he noticed that whenever the dryer operated there was a large swing in compressed air flow, so much so that a second compressor was required. Close inspection revealed that when the dryer was assembled, two solenoid valves were swapped by mistake. This dryer had run incorrectly for 5 years, costing this factory thousands of dollars per year in extra power costs.

Less than desirable piping practices can often be found after installation of new equipment, especially for turnkey jobs where the contractor supplies the piping at a fixed price. The purchaser assumes the contractor has the purchaser’s best interests in mind, but unfortunately, sometimes this is not the case. An installation was found at a printing plant where a 75 hp and 25 hp were both installed using one inch aluminum piping. The installation looked very neat and tidy, but when the pressure was measured, a 20 psi pressure differential was found at full load, robbing the plant of much needed pressure.

Quite often problems with the compressed air consuming equipment in a plant can cause issues. At an aircraft engine service plant the air compressors were found to be running out of capacity, so a new unit was being considered. In the past only two compressors were required, but now they needed three. A system audit was conducted, and during the leak detection process, a dust collector was found to have a failed valve. A blast valve had failed to open and was consuming compressed air worth 70% of one compressor.

It is best not to assume your system is running correctly. Always check your assumptions, or have someone with experience do so for you.