PLCs are very flexible, but machine builders that need precision hydraulic motion control, coupled with data acquisition during the machine cycle, can benefit by selecting an electro-hydraulic motion controller that is specialized for the task. Consider, for example, the manufacturing of wheel and axle assemblies for the railcar manufacturing industry. The process of attaching wheels and bearings to axles must meet the strict specifications of the Association of American Railroads (AAR). The AAR requires that, in addition to making sure that precise assembly measurements are adhered to, a record is kept of the forces encountered during the pressing process.

One supplier of railcar wheel assembly machines to meet these exacting requirements is Mittler Brothers Machine & Tool Company of Wright City, Mo. Mittler makes machines and tooling of all types. The machines they make for railcar wheel assembly do their work in two sequential steps: first, the wheels are pressed onto the axle, one at a time, and then second, bearings are pressed onto the axle, one on each end, being sure to keep the axle centered during the process. A completed assembly is shown in Fig. 1. 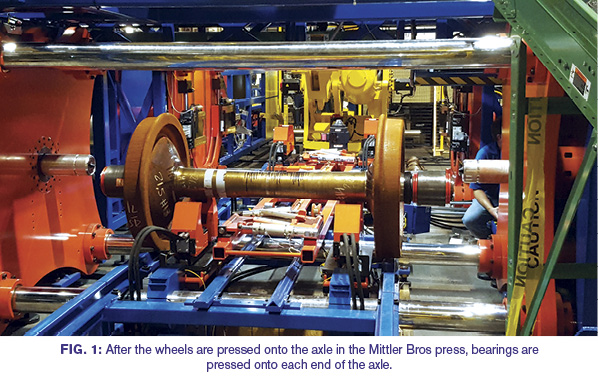 Mittler had produced a railroad wheel assembly machine years ago, but was recently contacted by a North American rail car company to produce a new machine. Mittler’s design team decided to take this opportunity to upgrade their hydraulic controls. The previous system worked, but the wiring of its analog hydraulic control module was complex, and the programming of the PLC that controlled the overall motion was difficult. Plus, the company wanted to incorporate an automatic means of making sure that the axle is centered in the press during the bearing assembly operation. This new approach required an upgrade to the PLC and the incorporation of a new digital electro-hydraulic motion controller.

At the recommendation of Mittler’s local hydraulic distributor, John Henry Foster Company of St. Louis, the Mittler Bros team selected the RMC150 from Delta Computer Systems, Inc. of Battle Ground, Wash., an eight-axis controller with special capabilities for precise closed-loop control of hydraulic systems (Fig. 2). Fig. 3 shows the RMC151 in the electrical panel to the left of the 16” bore cylinder in the wheel press. With the new Delta motion controller in place, the manufacturing process has been automated as follows. 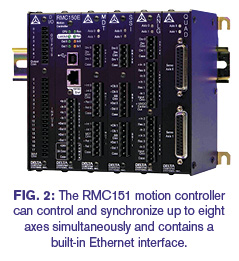 In the first phase of operation, when the wheels are attached to the axle, the RMC receives inputs from position transducers mounted in the wheel press cylinders, pressing the wheels, one at a time, onto the axle journals until precise target positions are reached. During these operations, the motion controller monitors the force being exerted by computing the differential pressure between pressure sensors mounted in each wheel press cylinder on either side of the piston. The pressures are logged and the data is retained in an information log that is kept for each axle.

“Per the AAR spec, we need to position the wheels to within a tolerance of 0.090 inch,” said Jim Heinrich, Mittler Brothers engineer. “And this tolerance must be achieved while exerting up to 200 tons of force in attaching the wheels.”

The second phase of the assembly process involves attaching bearings to the axle, one on each end, outboard of the wheels. During this phase of operation, it is critical for the axle not to shift while the bearings are being pressed onto it from each end. Sensors were added, enabling the RMC to monitor the axle’s position, press velocities, and forces exerted, while comparing them against setpoint values. The RMC refers to this information as it performs calculations that are required in order to keep the axle centered during the bearing press operation.

“We achieved significant reductions in the amount of programming steps that we had to write in the controls reimplementation because the Delta RMC was much easier to program than the previous controller, and a lot of that old code was on the PLC,” said Jim Heinrich.  “We could do complex programming quickly in the Delta RMC unit that would have taken many rungs of ladder logic programming in the PLC. All told, we were able to eliminate hundreds of lines of code from the PLC program by using RMC. 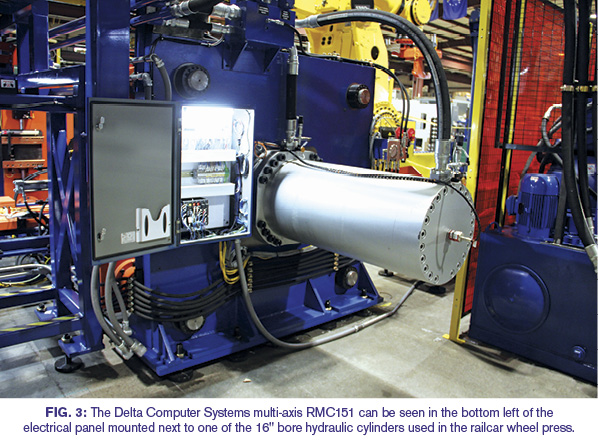 “Plus, we were able to simplify the wiring of our system, and we had access to a lot more information on the status of each motion axis due to Ethernet connectivity between the motion controller and the data recorder,” added Jim. “The old controller was connected via analog signals, which required complex point-to-point wiring for axis control and status signals.”

One of the most complex tasks was to program the motion controller to keep the axle centered during the bearing press operation, as a net force of up to 100 tons is applied. “The Delta controller greatly simplified the programming to center the axle to achieve this specification,” said Jim Heinrich.

The Mittler Brothers engineer made full use of the development tools provided by Delta Computer Systems, in a package called RMCTools, which is included free to support the company’s motion controllers. Among the software package’s many features is the Plot Manager, which captures and plots all key motion parameters during a move operation, enabling the comparison of the actual motion with the desired motion profile. The goal in tuning the motion is to make changes to the closed-loop gain parameters to reduce the error between actual and target profiles. The tuning process is further simplified by a Tuning Wizard feature that is also included in the RMCTools package.  Most of the programming and tuning was done by Jim Heinrich of Mittler Brothers, with some assistance by Delta’s field engineer during system tuning.

As mentioned previously, one of the key requirements imposed on railway wheel and axle assembly manufacturers is the need to keep detailed per-assembly records of the pressing process. The apparatus for doing this in the old system was complex, and using the Delta controller in the new system implementation is much simpler.

“With the old system, we had to duplicate the analog signals coming from the hydraulic control unit and send them to another piece of hardware,” said Jim Heinrich. “We split the analog signals and ran one set to the PLC for control purposes and the other to the press recorder for charting.”

In the new system, wiring and setup of the data acquisition function are simplified because the PLC can download all motion programs into the Delta RMC via Ethernet. The press data recorder can upload all motion parameters from each press operation directly out of the Delta RMC data registers, using a register mapping feature, via the controller’s built-in Ethernet interface.

A Simplified Design and Development Process

“Using the Delta controller both saved us development time and provided a controls platform that will be easier for us and our customers to maintain for years into the future,” concluded Jim Heinrich.