An Introduction to Hydro-Mechanical Transmissions

A hydro-mechanical transmission schematic is conceptually simple with two parallel power paths (Fig. 1). The hydraulic path is made up of a pump and motor referred to here as a “variator.” The mechanical path is typically a shaft with maybe a gear or two. These paths are interconnected with ordinary mechanical transmission components such as gears, shafts, clutches, and at least one planetary. There are a very large number of interconnection possibilities. In a given design, it is the details of these interconnections that constitute the bulk of the intellectual property and the suitability to the target machine application.

Hydro-mechanical transmissions have been available in agricultural tractors for a long time. They are either standard or offered as an option (Fig. 2).

Hydro-mechanical transmissions have not generally been available in earthmoving equipment until now. The wheel-loader segment is thought to benefit the most from a CVT, and that is where the latest offerings can be found. The examples in Fig. 3 have been announced and are available now or will be shortly. 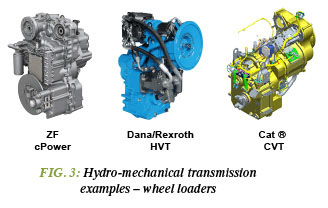 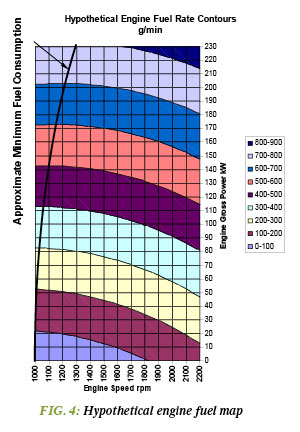 Consider the powertrain described in Fig. 5. The plot in the lower part of the figure indicates that for any given ground speed, there are only one or two engine speeds possible. It is unlikely that one of these speeds falls on the minimum fuel consumption line of Fig. 4. Furthermore, anticipated load changes, particularly if there are any difficulties in changing ratio, may lead an operator to choose a higher engine speed (higher fuel consumption) and/or slower ground speed (slower cycle time).

Consider the powertrain in Fig. 6. The plot in the lower part of the figure indicates that for a given ground speed, nearly any engine speed is possible and therefore can match the minimum fuel consumption engine speed shown in Fig. 4. The engine speed lines from the plot in Fig. 5 are included for reference. Because modern hydro-mechanical CVTs change ratio so well, there are few if any issues with load changes like there may be with discrete step transmissions.

While the information in this article may not prepare you to design a hydro-mechanical transmission, it will enable you to more readily recognize them and their potential benefits. 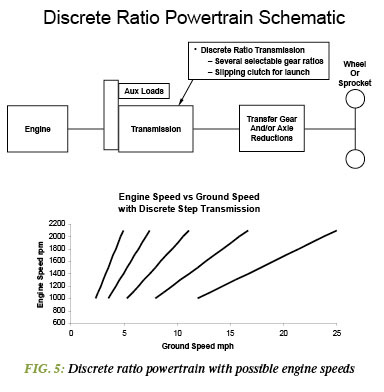 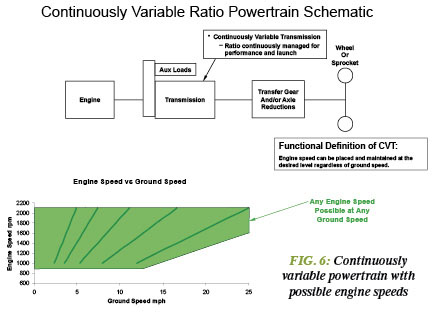 ABOUT THE AUTHOR: Mike Cronin has spent his entire career at Caterpillar working on off-highway drivetrains, most notably design and development of several hydro-mechanical transmissions and steering systems for track-laying machines. He retired in 2010 but continues to work for Caterpillar on a part-time basis. He currently holds 23 patents in the drivetrain area.