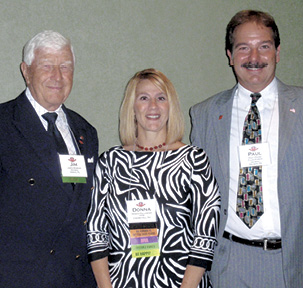 James Morgan, formerly of Kenosha and Hales Corners (Milwaukee), Wis., died on March 24, 2016 at the age of 92. In 1960, Mr. Morgan was a Founding Member of the Fluid Power Society. He came out of retirement in 1992 to help support the Society’s certification and training programs, and he was among the leadership that decided to launch the Fluid Power Journal.

Mr. Morgan was a graduate of Marquette University College of Engineering, a Registered Professional Engineer in Wisconsin, and a member of many local, national, and international business and professional organizations.

Mr. Morgan was a decorated veteran of the Normandy invasion with the Army Corps of Engineers. After victory in Europe, his reassignment to the Pacific theater was scuttled by Japan’s surrender. Besides spending time with his family, Mr. Morgan’s hobbies included golf, global travel, genealogy, and the pipe organ.

Pictured from left to right: Jim Morgan, Donna Pollander, and Paul Prass at the IFPS 50th anniversary meeting in 2010.