Injection Molding Machine Not Up To Speed 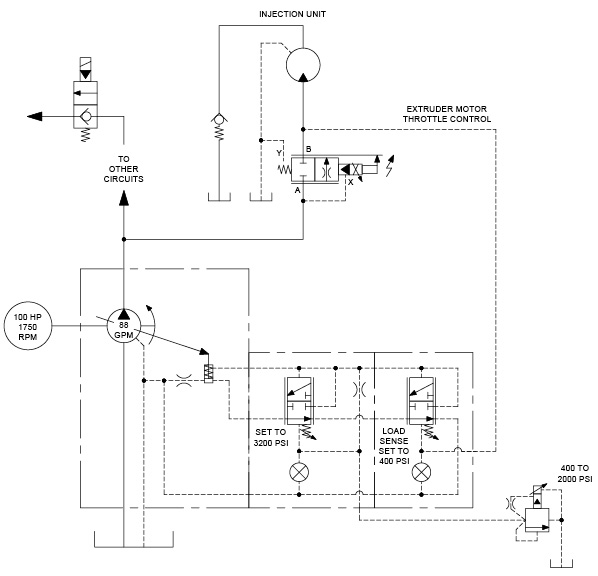 I was asked to help a student of ours with an injection molding machine that had trouble with the Extruder/Injection unit motor running slow. They originally were able to get the speeds needed to shoot a good product. I was told the products they were running the past 3 to 4 months ran well, but they used a lower extruder motor speed. They tried to run a different product (which ran well on this machine in the past) that required a higher injector speed. However, when they programmed in a higher speed, the machine would not deliver the higher speed even though the throttle valve was wide open.

They replaced the radial piston motor with a new one and checked the case drain flow on the relatively new pump. They also planned to order a new proportional throttle valve.

While inspecting the hydraulic system, we noticed they had replaced the pump at some time in the past because the entire system had slowed down, which fixed the problem as far as they knew.

Any idea why they could not get the higher speeds?

A proportional throttle valve will pass a relatively constant flow if the differential pressure across the valve is constant. If you increase the differential pressure, the valve will pass additional flow. The load sense compensator on the pump was set too low, causing the delta “P” pressure to force additional flow across the valve to be low. Adjusting the load sense compensator higher solved the problem.