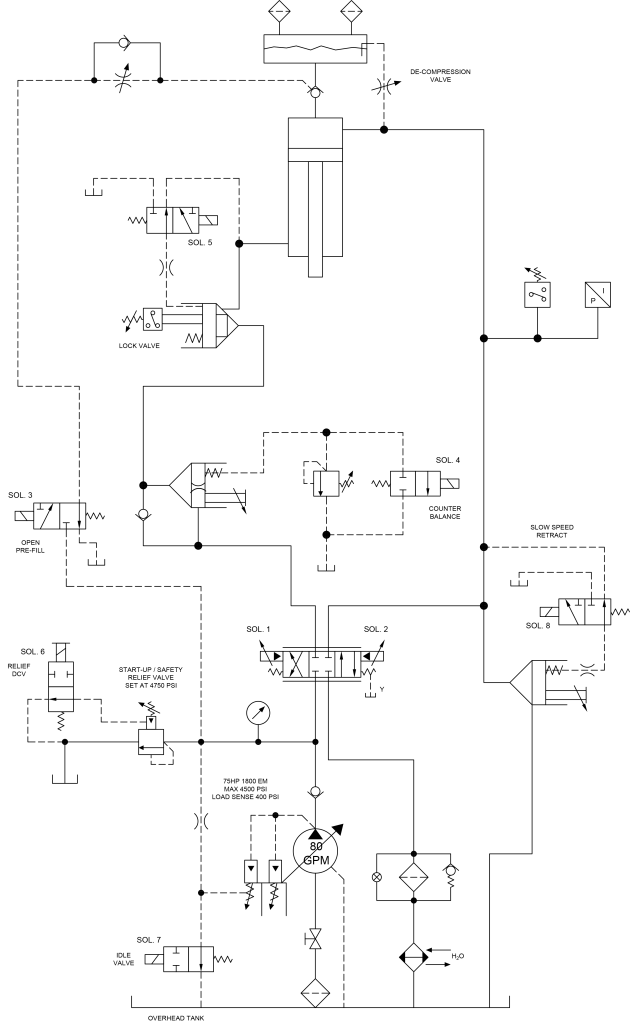 A manufacturer of cooking pots and pans had a large 200-ton press in which the pressure would only go to 600 psi. They needed a minimum of 3,500 to 4,500 psi. The circuit on the right shows the basic circuit for the main ram function.

While troubleshooting, they found that the return line filters were missing their elements. The company didn’t know how long the press had run without them. They decided to drain and flush the system and install new filter elements. They confirmed that all the solenoids were shifting by manually actuating and then electrically energizing and de-energizing the coil. They also checked all the orifices shown on the drawing, and some they found that were not. The proportional valve had spool feedback that confirmed the spool did shift and return to neutral.

The system pressure would drop to 400 psi when the idle valve solenoid #7 was de-energized, compensating the pump to standby. No loud oil flow noise could be heard. The separate solenoid #6 operated control valve is used to unload the manifold mounted start-up/safety relief valve. The DCV
coil #6 would energize three to four seconds after the start-up of the electric motor. (This would reduce the inrush AMP draw caused by the start-up of the electric motor.) They found that if they energized solenoid #7 and de-energized
solenoid #6, there was a loud rush of oil flowing somewhere in the manifold on which the valves were mounted. Replacing the start-up/safety relief valve did not fix the issue.

The 200-ton press pressure problem was a hard one to solve. It was determined that the lack of filtration had introduced scaring on the solenoid #6 directional control valve spool, increasing its leakage to tank when pressure is present. The only oil flow leaving the X port (sometimes referred to as the vent) of the start-up/safety relief was determined by a small control orifice in the relief valve. The oil flow through this orifice was exceedingly small and completely leaked past the directional valve spool back to tank at 600 psi. Replacing the directional valve solved the problem.